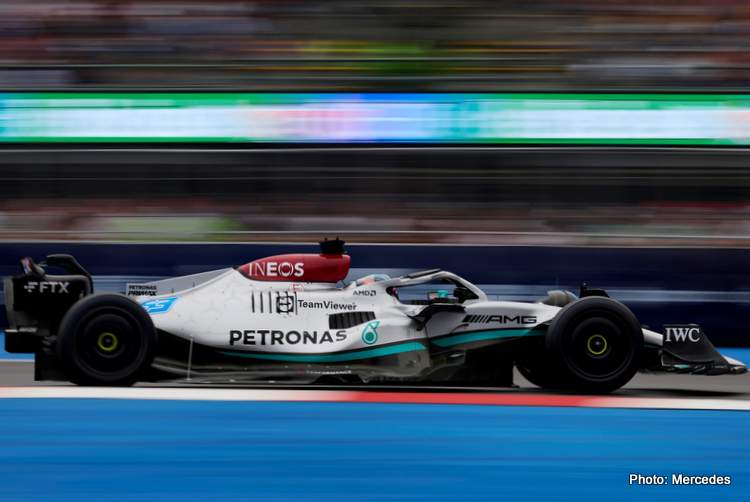 George Russell topped the final practice session for the 2022 Mexico City Grand Prix ahead of teammate Lewis Hamilton who was second fastest.

Russell seemed to be in a good place around the Autodromo Hermanos Rodriguez, able to extract maximum pace from his Mercedes from the first flying lap.

On the other hand, double Formula 1 World Champion Max Verstappen struggled with tyre warmup issues only good for third chasing Lewis Hamilton who was second fastest in the #44 Mercedes.

The Ferrari pair could not get close to the top as Charles Leclerc was fourth fastest while Carlos Sainz was sixth.

“The car is really difficult to drive – the front is not turning at all, so much understeer,” Leclerc complained over the the team radio.

Ahead of qualifying it’s George Russell in the box seat 👏#MexicoGP #F1 pic.twitter.com/v9bpOqyJxV

It was another race weekend where tyre testing during Friday’s FP2 meant we ended up with a meaningless session with unrepresentative times, as the buildup of the corner was disrupted.

So, again we look at FP3 to get the first glimpse of the pecking order of the Mexican weekend ahead of qualifying where the money will be on Red Bull and Ferrari slugging it out in the three-stage shootout while Mercedes “may” disturb proceedings at the front… Focus on the word may.

The repercussions of Red Bull’s cost cap breach matter remained the talking point this weekend even after the ruling was delivered by the FIA, but let’s not dwell on that now, and you can check GrandPrix247’s analysis of this subject here.

Valtteri Bottas was the first car out there, the Finn setting the first time of the session on Medium tyres, while teammate Zhou Guanyu seemed to be suffering from car trouble again the Chinese driver returning to the pits after one installation lap.

Final practice is GO – Valtteri Bottas first out on track!

Mick Schumacher brought out a brief Yellow flag as he lost control of his Haas at the Turn 11. The German however survived to fight another day, and kept his car out of the barriers.

Schumacher ended up with badly flat-spotted tyres and got into the way of Zhou Guanyu as he limped back on track.

The German has got going again and returned to the pits #MexicoGP #F1 pic.twitter.com/P5PjAehAQv

Max Verstappen finally emerged out of the Red Bull pits after 20 minutes had already elapsed from session, he was also joined by Fernando Alonso.

The Dutchman heads to the top of the timing screens from his first timed lap, a 1:19.296. He reported: “My first sector was so terrible with the kerbs.”

Pierre Gasly complained about his brakes back in Austin and seems to be still struggling with his brakes and suffered a massive lock up and went on an off track excursion at Turn 1.

Before Gasly Fernando Alonso locked up at Turn 12, while Lewis Hamilton did the same at the opening complex.

The grass is never greener at Turn 1

The tyres and brakes are tricky to get up to temperature ahead of the flying laps, which is causing all those lockups.

Halfway into the session, here is a look at the fastest drivers through the speed trap, Sainz leading the pack.

Verstappen seemed to be struggling with Tyre warm up issues as he locked up in the early stages of a flying lap on fresh Soft tyres in the final 15 minutes of the session.

“Same problem again,” the Dutchman radios back to his team, after backing off from his timed lap. He could not improve his time towards the end of the session.

George Russell’s FP3 topping time was a 1:18.399, 0.144s faster than that registered by teammate Lewis Hamilton who was second fastest for a strong-looking Mercedes.

Max Verstappen could not go better than third fastest, a massive 0.477s off the pace of Russell’s Mercedes as rival Charles Leclerc was a further 0.247s down the road in fourth.

Sergio Perez was down in fifth, 0.842s off the ultimate pace, not a good sign for the local hero who is looking to take his first victory at home.

Despite his early promise, Carlos Sainz was sixth fastest in the other Ferrari with a 1:19.301 almost one second away from the top.

Lando Norris was seventh fastest for McLaren, 0.918s slower from Russell, as Valtteri Bottas was eighth in the Alfa Romeo, 0.073s behind Norris.

Yuki Tsunoda was ninth fastest, 1.483s away from the benchmark, with Alex Albon completing the top ten, 0.035s behind the Japanese driver. 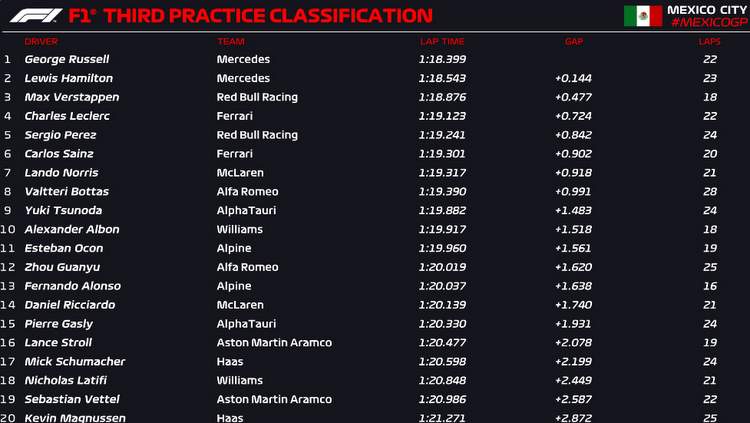