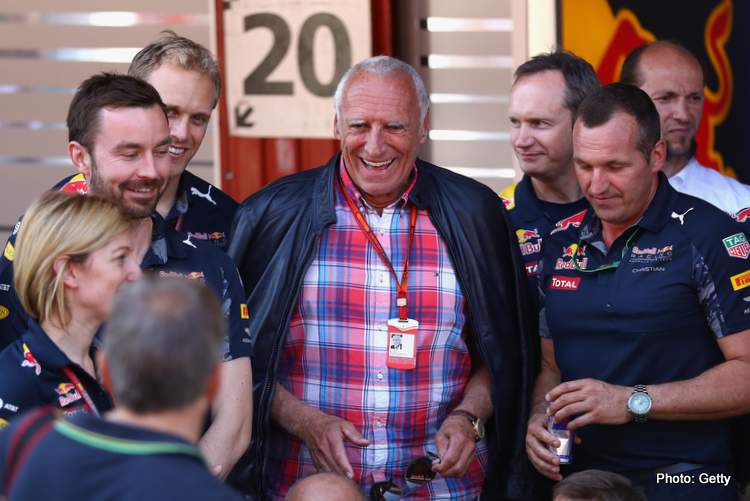 News filtered earlier this month that Red Bull billionaire founder and Formula 1 team owner Dietrich Mateschitz, was in seriously ill health; on Friday 22 October it was confirmed that he passed away, after a tough battle against cancer.

A quiet giant of the sport who avoided the limelight, also very private in his personal private life, Mateschitz was hugely liked and respected, his role through Red Bull in F1, motorsport and sports sponsorship has been immense. In days to come we will be revisiting the immense impact the Austrian had not only F1, but also motorsport as a whole, as well as extreme sports.

Shocked by the news, F1 reacted with great sadness, united in respect for the man whose legacy in the sport is the great Red Bull Ring he saved from extinction and of course his two teams: Red Bull Racing and AlphaTauri.

He revealed that he paid the billionaire a visit recently: “There I had a very nice day. We were able to talk about everything. Those are moments I will never forget.”

And added after qualifying second for today’s race in Texas, Verstappen added: ”We are going to try to make him proud. I got into the car before qualifying with a shitty feeling. In the end, you have to keep going and I’m also 100 percent sure that’s what he would have wanted. Dietrich always spoke with such passion about Formula 1, but also about other sports. Just look at what he did in football. He made the whole Red Bull brand big. You have to have a lot of respect for that.”

This is what has been said about Mateschitz in the wake of his passing on 22 October:

Christian Horner: “Look it’s very very sad, what a great man, he’s few of a kind, what he achieved, what he’s done for so many people around the world, across different sports is second to none.

“So many of us have to be so grateful to him for the opportunities that he’s provided, the vision that he had, the strength of character and never being afraid to follow and chase your dreams. That’s what he did here in Formula 1, proving that you can make a difference and we’re just incredibly grateful for him, everything he’s done and supported us with over the years.

“So many drivers, so many team members, so many people in this pitlane know him so much, so as he would of wanted, we now head into this qualifying exactly how he would have wanted it to be, he was passionate about Formula 1 and passionate about the team. Our determination is to go and do our best for him today and obviously win the race.

“Well thankfully he got to see that (Max Verstappen’s two world championships) and he was incredibly proud of the team, incredibly proud of everything that we’ve done and have been achieving. He’s been a passionate supporter and the back bone of everything we do, so it’s important that we celebrate and recognise the contribution he’s made. Quite a remarkable man and an inspirational individual and one we owe a huge amount.”

Stefano Domenicali: “I am deeply saddened by the news that Dietrich Mateschitz, a hugely respected and much-loved member of the Formula 1 family has passed away. He was an incredible visionary entrepreneur and a man who helped to transform our sport and created the Red Bull brand that is known all around the world I will miss him greatly, as will the whole community in Formula 1, and our thoughts and prayers are with his family, friends, and the Red Bull and AlphaTauri teams at this very sad time.”

Mohammed Ben Sulayem: “I am deeply saddened to hear the news that Dietrich Mateschitz has passed away.
He was a towering figure in motor sport and with Red Bull not only established two hugely successful Formula 1 teams but also supported motor sport of every kind and helped the careers of countless young drivers through Red Bull’s junior programmes. The thoughts of all the FIA family are with his loved ones at this time and he will be greatly missed.”

Ferrari: “We are deeply saddened to hear of the passing of Dietrich Mateschitz. A man who loved our sport and challenges. On behalf of everyone at Ferrari, we offer our condolences to his family and to our friends at Red Bull Racing and AlphaTauri. Our thoughts are with them all.”

Ferrari Chairman, John Elkann: “I am grateful to Dietrich Mateschitz for all he has done for motor racing and will remember his passion and courage as an entrepreneur and as a man who always loved new challenges.

“On behalf of everyone at Ferrari, I would like to offer our condolences to his family and to our friends at Red Bull Racing and AlphaTauri. Our thoughts and sympathies are with them all.”

Williams F1 Team: “Williams Racing is very sad to learn of the passing of Dietrich Mateschitz. We are sending our thoughts and condolences to his family and friends and everyone at the Red Bull and Red Bull Racing family at this time.”

Alfa Romeo: “Alfa Romeo F1 Team ORLEN are saddened by the news of the passing away of Dietrich Mateschitz. Our thoughts and sympathy are with Dietrich’s family and friends at this moment, as well as with everyone at Red Bull Racing and Scuderia AlphaTauri.”

Toto Wolff: “It is with great sadness that we have learned of the passing of one of the greatest and most visionary entrepreneurs in the world. What Dietrich Mateschitz did for Formula 1 was unprecedented -and we send our deepest condolences to his family and friends.”

Karun Chandhok: “Very sad to hear about the passing of Dietrich Mateschitz. A huge supporter and investor in the world of motorsport but always in a quiet and understated manner, away from the limelight. My condolences to the Mateschitz family and everyone at Red Bull.”

Sergio Perez: “Unfortunately I didn’t get to spend much time with him. He was a great human being – super happy, really excited – and what he created, the brand that he has created, and not only that, his passion for the sport, I think he has really made a massive difference to the world.

“I really hope that tomorrow we can do everything to be crowned [constructors’] champions because it will be a nice day to do that.”

Pierre Gasly: “It’s obviously extremely sad to hear that Dietrich passed away, and especially this weekend. I sent a message to his family before the qualifying. It’s a sad thing.

“What he has done, what he has achieved with Red Bull, what he has provided to all of us as part of the Red Bull family, will be remembered forever.”

Carlos Sainz: “I would like to send my condolences to his family and to the whole Red Bull family. I knew Dietrich quite a lot and I’ve been also helped by his support in the past; I wouldn’t have reached Formula 1 without him.

“The amount of things he’s done for motorsport, not only Formula 1 and young drivers, but if you think about how many Red Bull logos are out there in all the categories, from MotoGP to F1, to all the sports that you can think about – how he has supported young talent, how many people have been supported by him, and his vision and his idea, is crazy.

“I think he’s a super important guy, a super nice guy, and a guy I always enjoyed being around. From here, I want to send my condolences. Rest in peace.”

Yuki Tsunoda: “As a Red Bull family, definitely it’s really sad and really a shame. It was bad news to hear, especially before qualifying.

“The achievements he had, and also without him, Red Bull Racing and also AlphaTauri, we couldn’t be able to progress like this. Rest in peace and [we’ll] push hard for him tomorrow.”

Daniel Ricciardo: “I got the news about Mr. Mateschitz just before quali as well. Obviously it hasn’t been the most pleasant last hour and I just wanted to pass on my condolences to his family and all the Red Bull family.

“He played an integral part in my career and was very instrumental in just getting me where I am today, ultimately. Even since [leaving Red Bull at the end of] 2018 we kept in touch. As you know, he wasn’t always… He didn’t like the limelight and kept back, but if I heard he was at the circuit, I would try and go and see him.

“What he built is phenomenal, so there is a lot of good things and a lot of happy memories that many of us athletes can share, who where part of the Red Bull family at a point in time. It’s very sad news, but what a man.”

Alex Albon: “I only got told just after the session. It’s a shock. It’s amazing what he has done in the sport, not just in Formula 1, what you see, but the amount of drivers that have had the opportunity to come through, who have been funded by Red Bull, myself included.

“I was 12 years old when I was being sponsored by Red Bull. It’s a great shame. He had a huge heart and passion for sport, for everything in general. He will be greatly missed.”

To all our readers, feel free to add your tributes to Dietrich Mateschitz in the comments section…