Suzuka Qualifying: Verstappen on pole, now for the Title 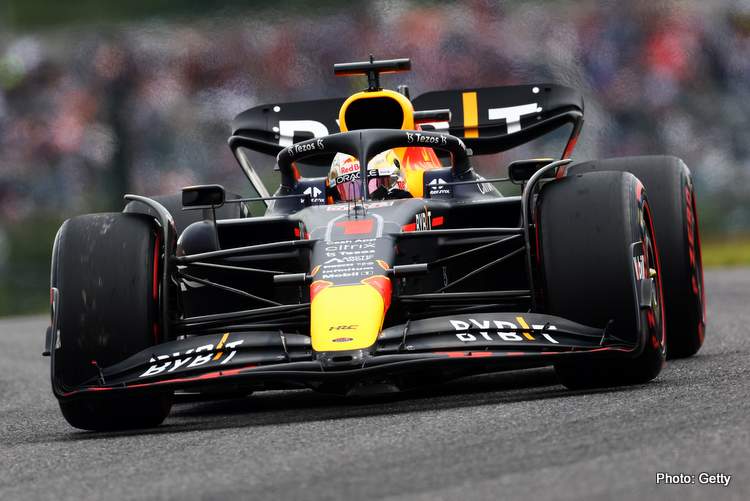 Max Verstappen took pole position in qualifying for the 2022 Japanese Grand Prix by the slightest of margins from Charles Leclerc, second for Ferrari.

Verstappen’s pole however may be at risk, as he will be under investigation for an incident with McLaren’s Lando Norris, as the the 2021 Formula 1 Champion was on an out lap heating his tyres and missed to see Norris coming through; a close one.

Nevertheless, pole position will be a solid base for the Dutchman’s bid to secure his second F1 crown, a consecutive one, in Sunday’s race, expected to be hit by rain.

Verstappen’s first lap in Q3 made all the difference as it was good enough to secure pole from Charles Leclerc by 0.010s, as he had a scruffy final lap even damaging his RB18 with an off moment.

Carlos Sainz was third fastest in the other Ferrari 0.057s off pole; a very close result between the top three.

MAX ON POLE IN SUZUKA!@Max33Verstappen takes his first pole in Japan, just 0.010s ahead of Leclerc!#JapaneseGP #F1 pic.twitter.com/ENOZ9HZRk2

Verstappen said after qualifying: “It was pretty incredibly to drive here again, and especially in qualifying. When you’re on low fuel these cars really come alive in the first sector.

“I lost a part of a duct in my final lap, so for me that’s why I couldn’t really improve. Nevertheless, the first lap was good enough,” he added.

Of his Norris incident, Verstappen commented: “I was just driving quite slow, and I wanted to accelerate but my tyres were quite cold, so then I had a big moment. Then of course Lando was trying to pass me at the same time so he had to avoid me a little bit, but luckily nothing happened.

It remains to be seen what the Stewards’ decision will be when the investigate the Verstappen/Norris incident after qualifying, and whether the Red Bull driver will be given a grid drop or not.

Update: After meeting with the Stewards, Verstappen was let off with a reprimand, keeping his pole at Suzuka. Read full story here.

Max waves to Lando to apologise the next time round

“It’s so close with everyone so that’s nice, and we’ll try to have a good race. Very limited amount of data going into the race, so that’s always a challenge. The feeling as good with the car. Let’s wait and see the conditions – it seems that there could be some rain in the race, so it should be fun.

“It’s always nice to be here and see so many people being passionate about this sport,” the Monegasque concluded.

Third placed Carlos Sainz cut a disappointed figure having missed on pole by less than a tenth; he said: “It was a very clean lap and a very good lap all the way until the last corner. It’s a shame to be again half a tenth away from pole, it’s been so many qualis now with Max and Charles that we’re always within half a tenth.

“It’s fallen mostly to the other side and hopefully towards the end of the season this half a tenth falls a little bit more to my side and I can get a pole position.

“I think the weather tomorrow is going to play its part, the rain is going to arrive. We don’t know if it is going to arrive at 2pm, 3pm or 4pm! There’s plenty that could happen tomorrow and there’s also a great opportunity starting in P3, we managed to save also a set of softs in case we need it. We are in a good position to fight Max tomorrow,” the Spaniard explained.

Max prevails in the closest qualifying of the season!

Just 0.010s was the margin @Max33Verstappen had over Leclerc in P2 🤯#JapaneseGP #F1 pic.twitter.com/pgVgRhT47H

As mentioned earlier, the top three qualifiers at Suzuka, Verstappen, Leclerc and Sainz were separated by 0.057s, as Sergio Perez took fourth fastest.

Perez set a lap time of 1:29.709, 0.405s off the pace of his teammate and polesitter Verstappen, as Esteban Ocon was fifth fastest for Alpine.

Ocon played second fiddle to Fernando Alonso all weekend and up to Q3, but finished ahead of him in the end, his lap time of 1:30.165 over eighth tenths off pole.

Lewis Hamilton was sixth fastest for Mercedes, the Silver Arrow not having enough firepower to fight further up front. The seven-time F1 Champion was ultimately 0.961s slower than Verstappen’s time. Almost a second there!

Fernando Alonso was seventh fastest in the other Alpine after some impressive pace earlier, but the Spaniard was 0.157s slower than his teammate, Ocon.

George Russell was beaten by his teammate, and will start the race on Sunday from the eighth slot, the Briton posting a 1:30.389, a little over one second down from the best.

Sebastian Vettel loves Suzuka, and that showed in qualifying as the German dragged his Aston Martin all the way up to Q3, but ninth was as good as it got for the four-time Champion on his final Japanese qualifying. 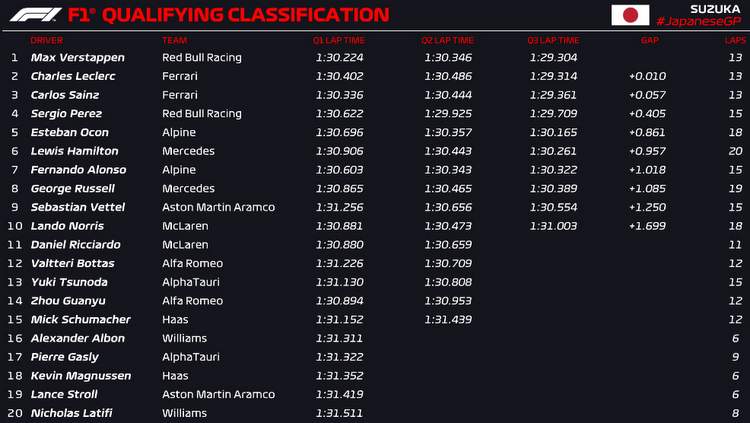 Ferrari sent out both its drivers Carlos Sainz and Charles Leclerc on used Soft tyres for their first laps in Q2, as the sun shone through something Sainz noted.

“Looks like the sun is out, so could be a slower track,” the Spaniard pointed out to his team over the radio.

AlphaTauri’s brake problems continued into Q2 as Yuki Tsunoda reported: “Brake is so bad!”. He was again advised to work the brakes, straight-line braking.

Max Verstappen, Carlos Sainz, and Charles Leclerc did not even bother to go out on track for another run, showing confidence with the times they initially set on used Soft tyres.

That mixed up the final results of Q2, as Sergio Perez led the top ten qualifiers into Q3, with a 1:29.925, followed by Fernando Alonso in second, 0.418s behind, as Max Verstappen was third.

First to lose out on Q3 was Daniel Ricciardo, despite showing some glimpses of pace earlier, and was 11th fastest by the end of Q2, and missed the cut by a painful 0.003s. Just painful.

Valtteri Bottas was next, 12th in the Alfa Romeo, 0.050s behind Ricciardo, as home hero Tsunoda was 13th fastest 0.099s behind the Finn.

Zhou Guanyu was 14th fastest in the other Alfa Romeo with a lap time of 1:30.953, as Mick Schumacher’s qualifying ended 15th fastest partially redeeming himself after Friday’s crash as he outqualified his teammate this time. 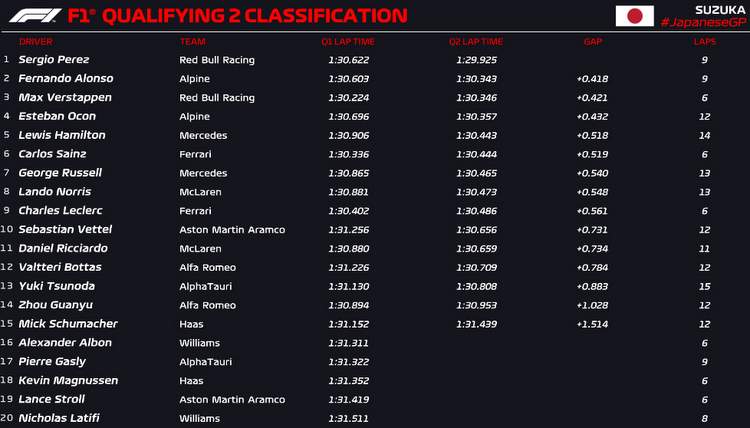 Dry conditions from FP3 continued into qualifying as Q1 started, giving a chance to see the great looking 2022 cars going around Suzuka the drivers giving them full beans.

At the start of the session and while other cars took to the track, Charles Leclerc remained out of his F1-75 as the mechanics were performing some major work on the car’s floor. He joined the session after ten minutes from the green light.

Notably, as all cars took to the track on Soft tyres, Mercedes sent both drivers out, Lewis Hamilton and George Russell on medium tyres.

Home hero Yuki Tsunoda was the first on track and set the first time of the session, a 1:31.631. It didn’t last long though as other drivers started setting their times dropping the Japanese from the top.

First on track, first on the leaderboard ☝️@yukitsunoda07 goes P1 with a time of 1:31.631#JapaneseGP #F1 pic.twitter.com/VbOO8CBysW

Pierre Gasly reported brake problems on his AlphaTauri; he said over the team radio: “Problem with the brakes. What the **** is going on?”

It seems the same issues hit Tsunoda who was asked to work on the brakes, straights line braking, the driver responding clearly agitated: “I know, I am doing!”

GAS 📻: “Problem with the brakes… what is going on?”

Both AlphaTauri drivers are struggling with brakes, but they’re both inside the top 15 as things stand#JapaneseGP #F1 pic.twitter.com/dVyoT3FHCj

First of the drivers off to an early shower was Williams’ Alex Albon who was 15th fastest, having had one of his early laps deleted for exceeding track limits. He missed the cut by 0.055s,

Kevin Magnussen was next in the Haas, 17th fastest 0.030s behind Gasly, and was followed by Lance Stroll; 19th for Aston Martin, 0.067s behind the Dane.

As usual Nicholas Latifi was dead last, 20th, and two tenths slower than his teammate. 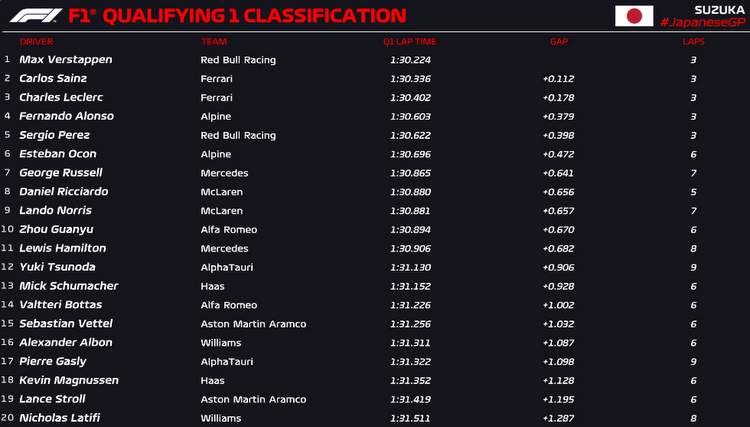