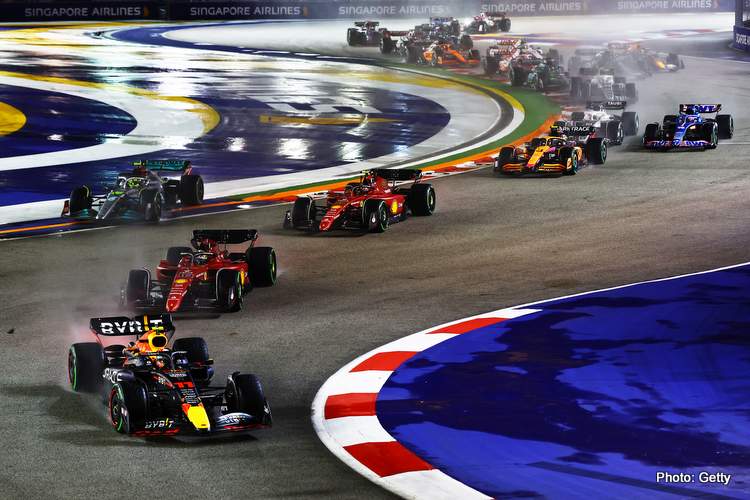 Sergio Perez powered to an emphatic lights-to-flag victory at the Singapore Grand Prix, Round 17 of the 2022 Formula 1 World Championship at Marina Bay Circuit, fending off a relentless attack from Charles Leclerc.

But it was a victory that nearly never was as FIA stewards took three hours after the race to make decisions that are typically dealt with when they happen. Perez was summoned after the race for an explanation for his actions behind the safety car.

Indeed the night belonged to the Mexican, always potent in trying conditions as they were today, he blitzed off the line past the Ferrari of pole man Charles Leclerc and that was that as the #11 Red Bull stayed ahead all afternoon despite everyone starting on Intermediate tyres, safety cars and VSCs plus a Ferrari big in his mirrors all race long, to claim the fourth F1 victory of his career.

While many lost their way in the tricky conditions, Perez never put a foot wrong, easing the gap to three seconds by half distance, with standing and attacks from the Ferrari behind, it was a dominant win for a driver used to watching his teammate deliver a drive of this quality. Probably the best drive of his 229th starts in the top flight.

He reflected on his victory in parc ferme after the race: “It was certainly my best performance, I controlled the race. The last few laps were so intense I didn’t feel it that much in the car but when I got out I felt it. I gave everything for the win. I think it’s nice for Max to get it in Japan and for the team and for Honda. All in all a fantastic day.” 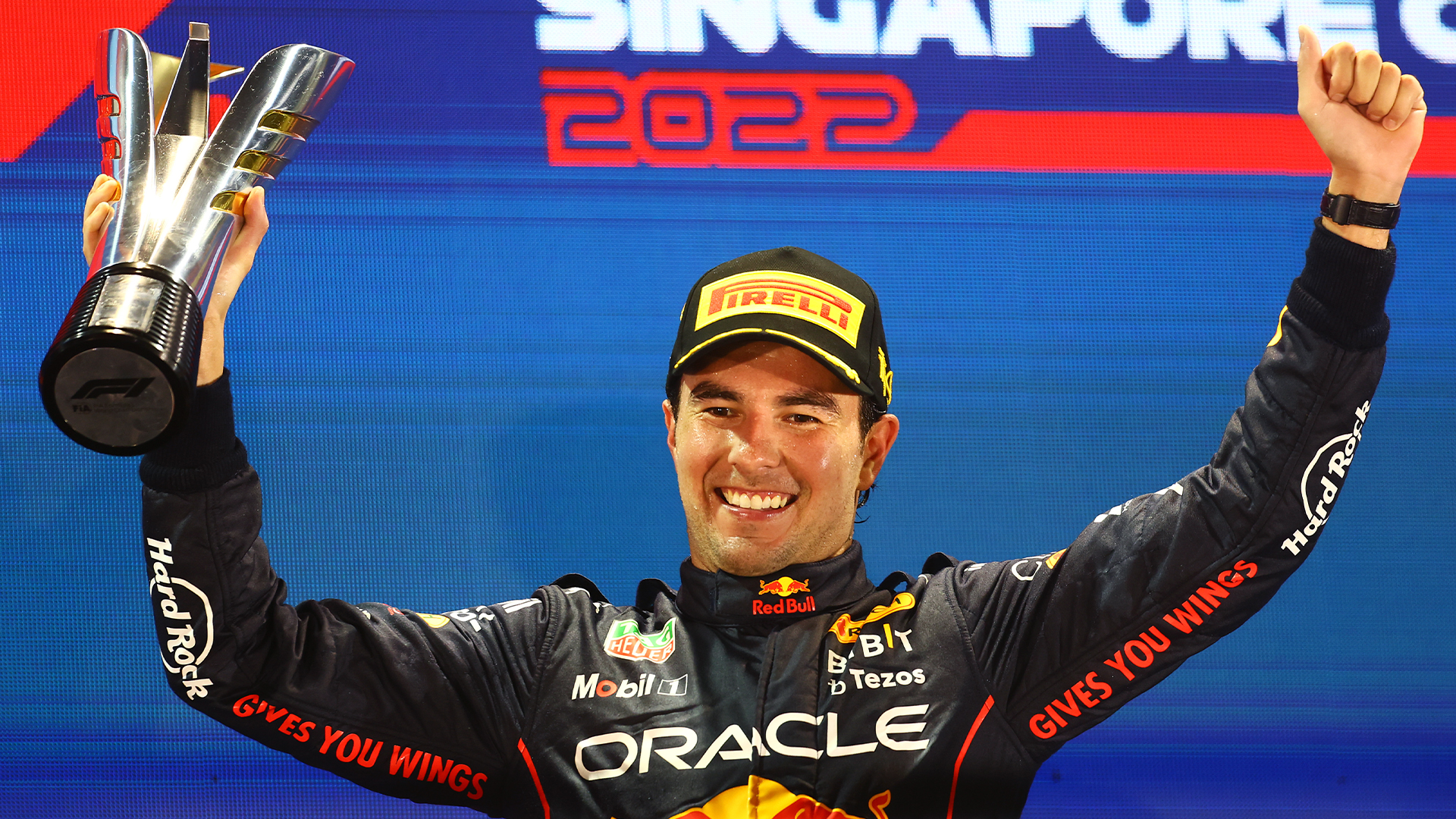 Leclerc’s race was probably lost at the start, nevertheless, the Ferrari driver pushed hard all evening but second is where he stayed until the end. He never gave up: “I pushed all the way. The bad start put us on the back foot and it was a really difficult race after that. It was difficult. I need a good night’s sleep and to get ready for Japan.”

Sainz was third, but unlike his teammate never looked like a challenger for the win thus stuck to his own game plan to claim third place and really stick the knife in Mercedes’ desire to beat them this year to second place in the 2022 F1 constructors’ championship. No victory but a solid weekend for Ferrari.

The Spaniard summed up his race: “It was very tough out there. I never really got into a rhythm in the wet and then couldn’t challenge the top two guys. I had to settle for P3, but the good thing is I didn’t do any mistakes and could bring the car home and be quick towards the end of the race. It’s a good result for the team in the Constructors’ Championship.”

World Champion elect Max Verstappen did not wrap up the title, the Dutch ace started eighth and was always in the wars, when a podium looked possible he made a mistake and spent the rest of his evening recovering to finish seventh. The title was not decided today in his favour, maybe Japan…

How the 2022 Singapore Grand Prix unfolded 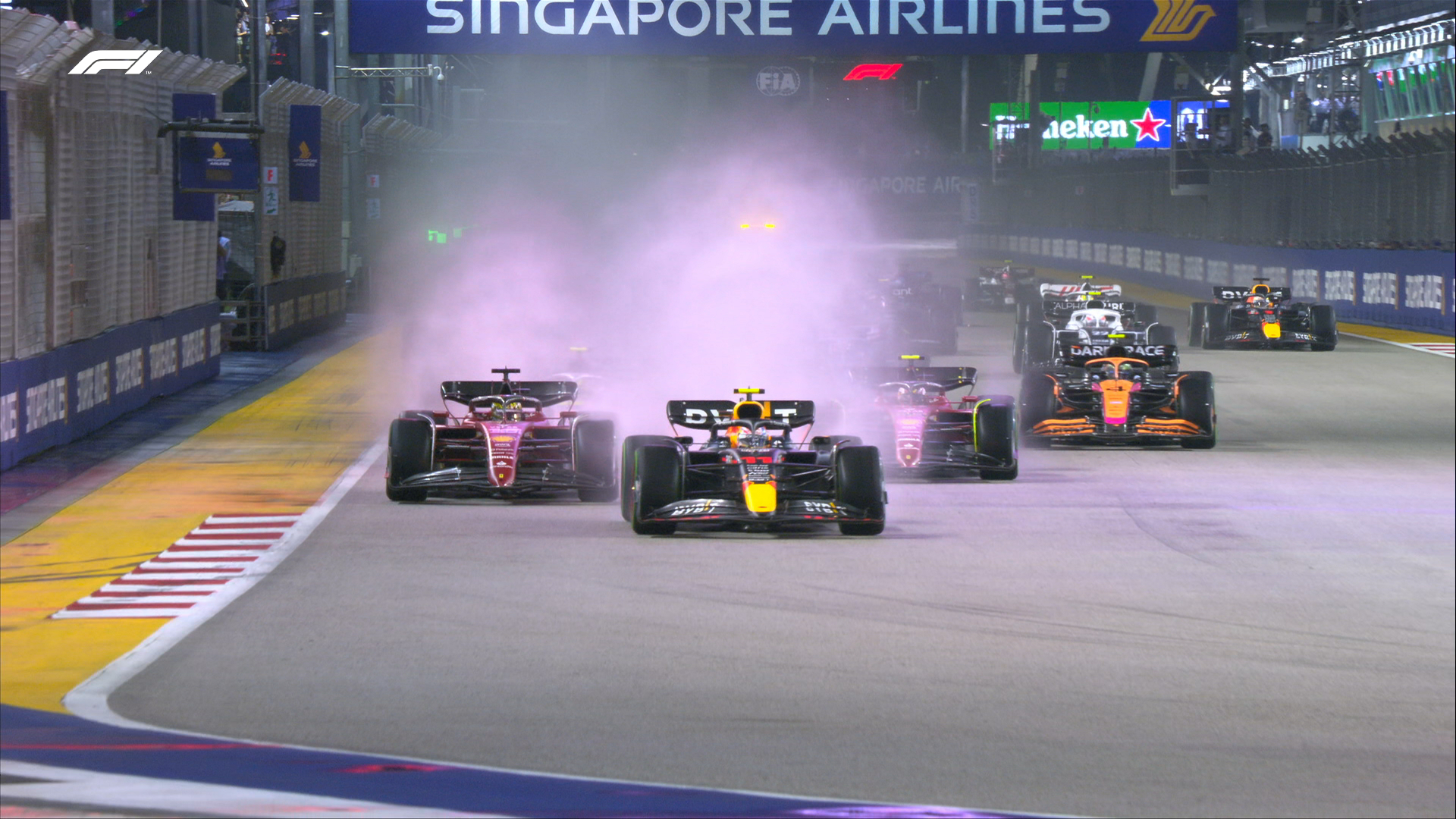 Earlier, after an hour of waiting for the circuit to dry after lightning storms earlier in the day turned Marina Bay Circuit into…. well, a bay! But then proceeded to dry so rapidly that the hour and five minutes delay to start the race seemed excessive.

Begging the question: Why do the best drivers in the world, the most expensive cars not race on full wets? Could the 2022 Singapore Grand Prix not have started at the right time (or half an hour later) and run the Pirelli wets?

Eventually, an hour later than scheduled, the race was on when the red lights went black, Perez made a great start, not much slipping and sliding, to take the lead, pole man Leclerc tucked behind him with Sainz nipping into third past Hamilton who had an off-track exiting Turn 1 that slowed him.

Verstappen fumbled the start slipped back down to 12th but finally got to grips and within a lap made a couple of places, in tenth and 17 seconds down on teammate Perez at the front, followed by Leclerc, Sainz, Hamilton, Norris and Alonso when things settled around lap three.

Lecler stalked Perez, always good in tricky conditions, was in control and setting fastest laps as he edged ahead while the field staggered rapidly; by lap five, the gap between Leclerc in first and Albon in last was 42 seconds with not much close racing within the spread.

First to bend metal was inevitably Latifi who, on lap 8, outrageously took out Zhou, who was having a strong race in the Alfa Romeo in his first Singapore Grand Prix, triggering the safety car. DNFs for both drivers and a clear reason why the Canadian does not have a place among the F1 elite and was ditched by Williams, despite the big money his billionaire father pays for his son to race at this level. 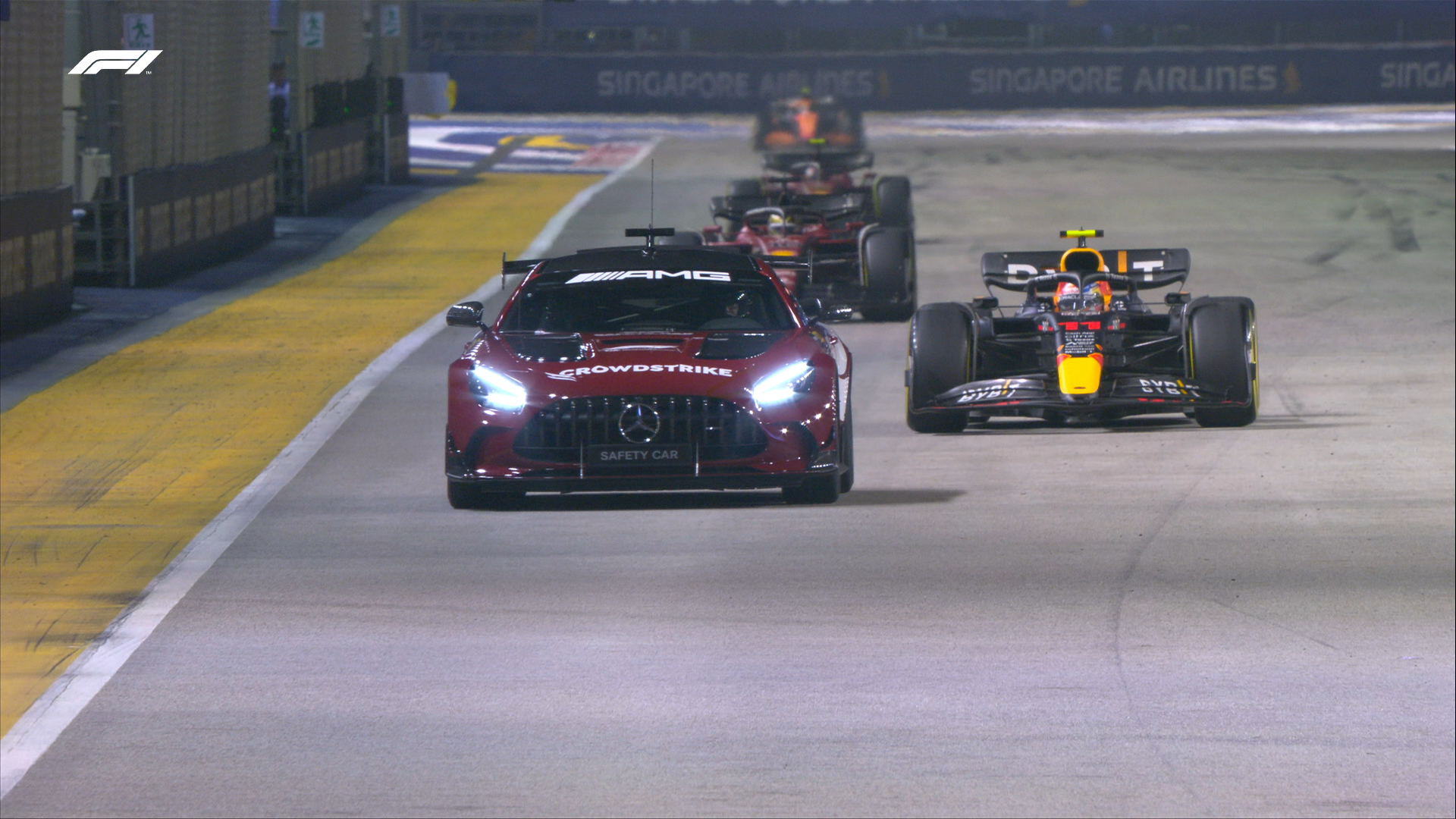 Action resumed on lap 10. Norris reporting at that point the track was not in slick mode, as large areas remained wet.

When the safety car ducked into the pits, Perez got a good run and by the end of the lap was a second ahead and setting purples, followed by Leclerc, Sainz, Hamilton, Norris, Alonso and Verstappen on a charge, back up to eighth where he started from.

The World Champion had the bit between his teeth with Alonso and Norris in his sights and getting closer with each lap.

At the front Leclerc had a few attacks on Perez but the Red Bull driver turned it on again edging ahead over two seconds, with Sainz in third falling out of contention and Hamilton stalking the Ferrari but with little ammo to attack the Red car.

Norris was a lonely fifth while Verstappen was stuck in seventh with Alonso being his gladiatorial self, showing little sympathy for the World Champ as he held off the #1 car who pegged his progress as the leaders, 20 seconds ahead, over a second faster per lap at that stage. It was lap 20.

Behind the top seven, Gasly was holding off Vettel with Tsunoda in the final points paying place but playing the ‘cork-in-the-bottle’ role as a train of cars chased him until on lap 21 he could no longer stem the attacks.

At the same time, Alonso’s feisty performance ended as the parked the Alpine, reporting an engine issue with the car. A VSC was deployed to remove the stricken Blue car. A sad end to the Spaniard’s incredible 350th F1 race.

Russell was brave to go so early onto slicks 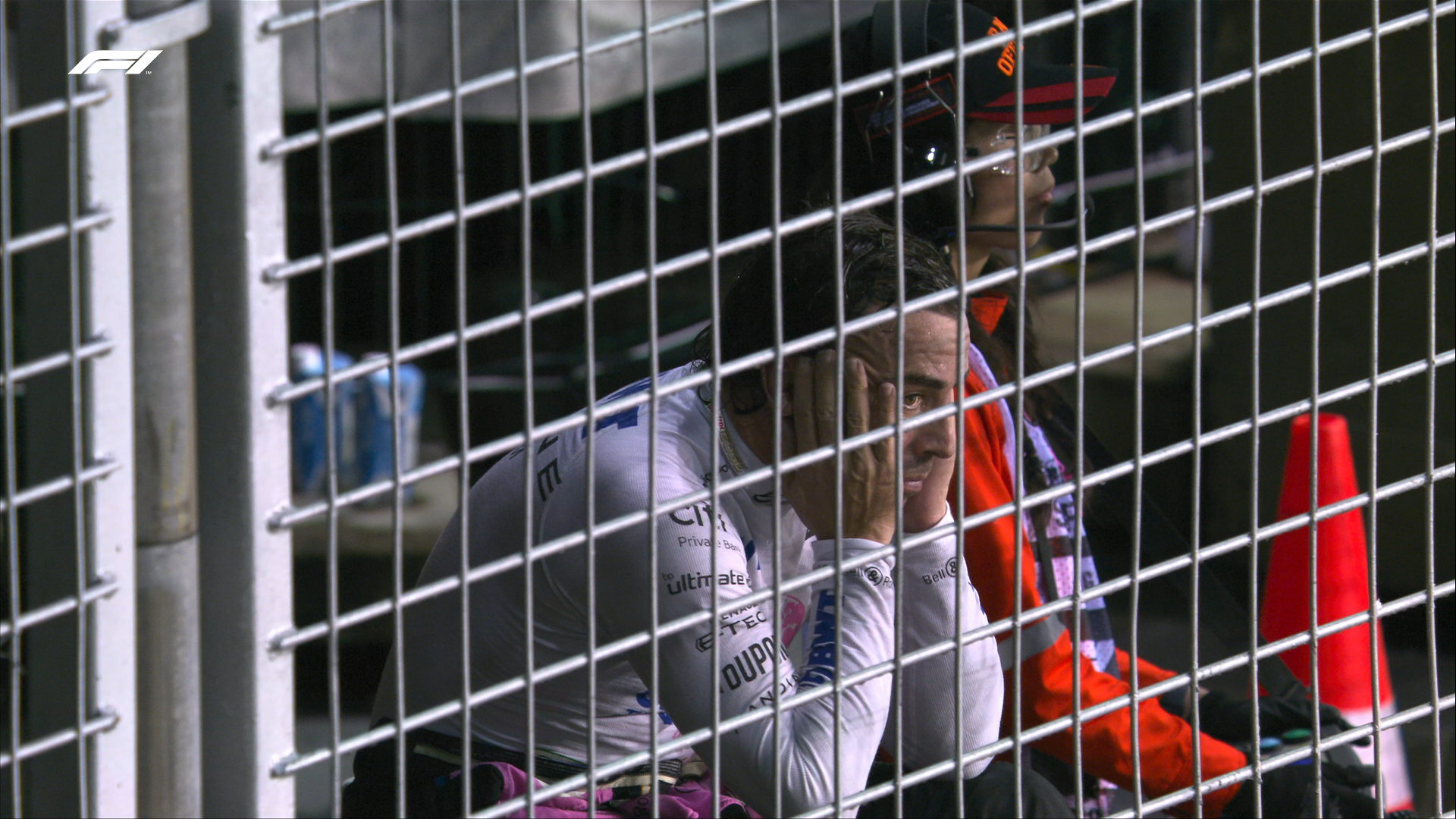 Russell, whose afternoon was spent in nowhereland, took the plunge and popped on mediums. When informed of the move over the radio, Verstappen the Red Bull driver said: “That’s brave.” But didn’t work as the Merc slithered and slid perilously well off the pace.

On lap 26, Albon clipped the wall and broke his front wing when he clattered into the wall in sector two which prompted another VSC. It was an early and disappointing end for the Williams team.

A couple of laps later, Alpine’s day was over when Ocon’s car blew up with a massive puff of smoke, forcing the driver to park, like his teammate, with an engine issue which triggered another VSC ensued as they recovered the stalled car. A very bad day for the French team.

On lap 30 when the track went green, the order at the front was the same, but Hamilton was under Sainz’s wing, the Ferrari driver not finding the pace his teammate had up ahead while the seven-time F1 world champion was in the mood and wanting to recover the third place he lost with a dodgy start.

Behind them, Verstappen was all over Norris, the pair nearly collided when they were behind the VSC in their battle for fifth and again, like Alonso, when the track went green the McLaren driver made life difficult for the Red Bull ace.

On lap 33, Hamilton went straight – missed his brake mark – into the wall hard, but recovered with a dinged wing but sandwiched between Norris and Verstappen, his nemesis, big in his mirrors.

At this point, Russell on mediums going faster and faster, and everyone started to play their final hands. Ferrari brought Leclerc in for a stop, he emerged third despite a tardy stop from his crew.

Perez also pitted, from a 20-second lead over Sainz. His crew was excellent as usual when he came through in the lead with slicks. Sainz did the same when he came around. As did Tsunoda, the Alpha Tauri driver emerging and sticking it in the wall on his out lap in Turn 10. Another safety car.

A race of high attrition on race night meant many DNFs 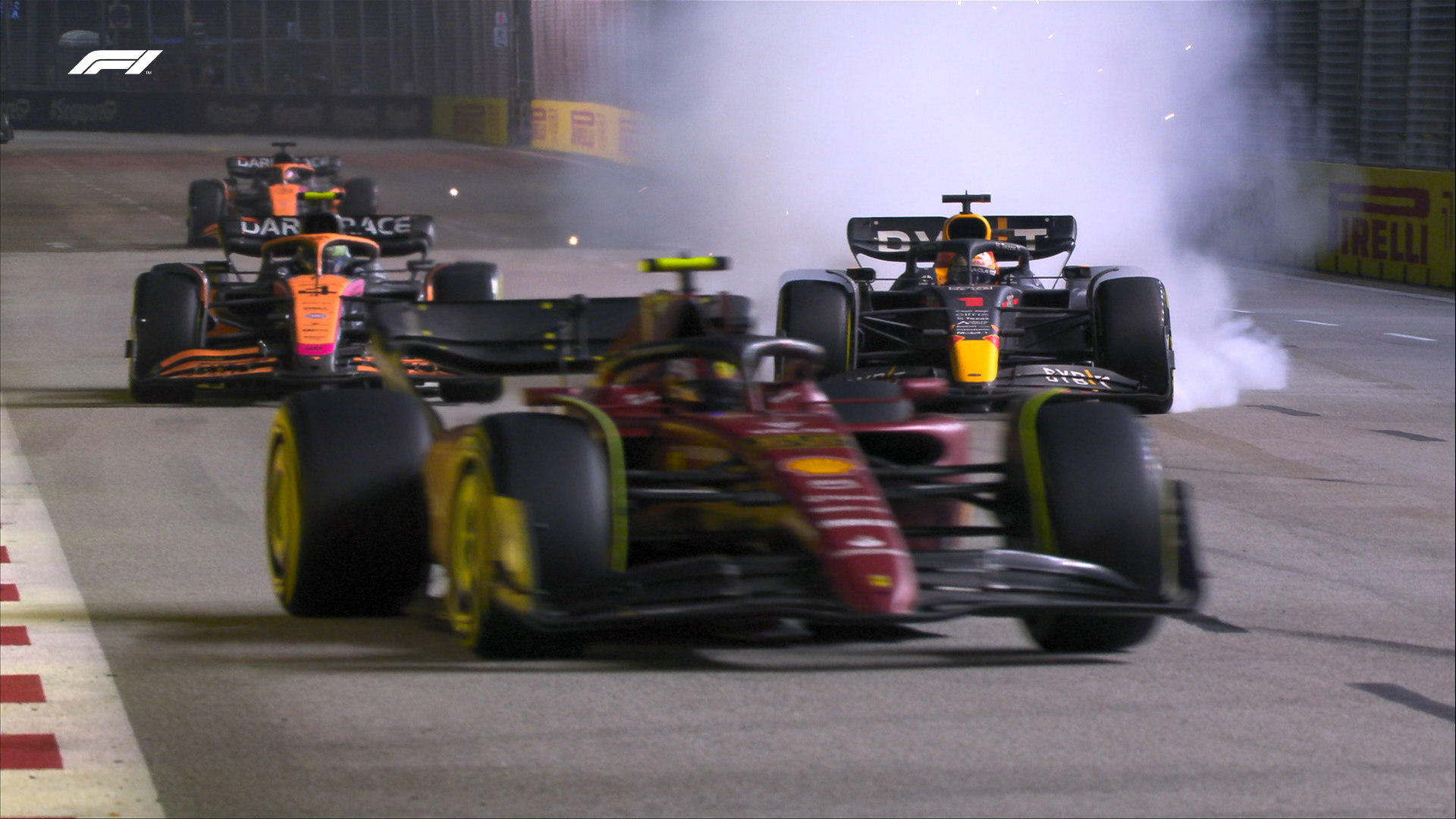 Only 14 cars remained when they got going again with the clock showing 34 minutes (61 laps would not happen under the stipulated two hours) Perez again got off to a great start but simultaneously, Verstappen overcooked it, flat-spotted his tyres trying a mega-optimistic move on Norris but slid into an escape road, squaring his tyres in the process and all but ending his day. He dropped to 12th.

At the front. Perez’s afternoon was changing as stewards let it be known they noted a safety car infringement by the Red Bull driver and, crucially Leclerc was big in his mirrors sniffing victory and pumping on the pressure.

Behind the mighty feud, Sainz was way back in third, followed by Norris who had him in his sites and Ricciardo from P16 enjoying one of his finer afternoons, on softs (with most in the top ten on mediums) was up to fifth.

Emerging from the attrition were the masters of such conditions, salvaging much-needed pride for Aston Martin with Stroll sixth and Vettel seventh, in formation with Hamilton honing in fast.

Gasly was ninth followed by Bottas, his Alfa Romeo on softs, in tenth and Verstappen 11th. 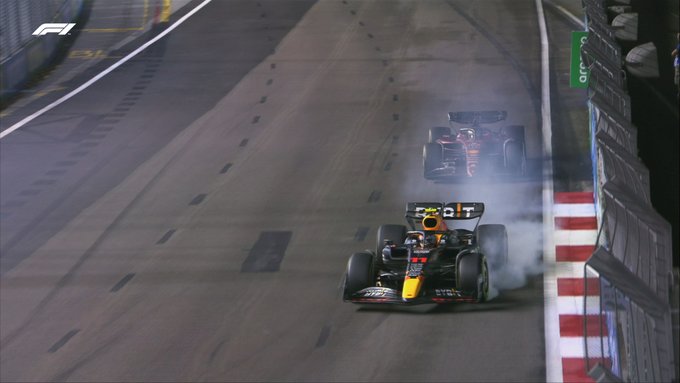 But from minute-20 it was all about the battle at the front, Perez defending ferociously as Leclerc bobbed-and-weaved in the Red Bull mirrors. The Ferrari quicker, Perez smarter. The pair traded fastest laps; DRS was enabled. both making little mistakes, locking up, flat-spotting. Enthralling stuff!

Verstappen pitted again for softs and started to scythe his way upfield, with seven minutes to go, Hamilton was in front of the Red Bull and chasing Vettel in seventh; three F1 World Champions, a dozen titles between them, battling.

Hamilton made a mistake went wide with a minute on the clock, and Verstappen nipped by to take eighth and set his sights on Vettel, overtaking the Aston Martin on the final lap to claim seventh.

At the front, Perez got the message that he could face a penalty for the second restart and upped his pace to create a five-second gap just in case.

This was, without doubt, one of the best drive of his career, he defended and attacked when needed, went toe to toe with Leclerc to win the 2022 Singapore Grand Prix by over seven seconds. A perfect drive.

Leclerc, the perfect challenger, had to settle for second with Sainz third for a double podium for Ferrari.

They were followed by the two Norris and Ricciardo, meaning McLaren move ahead of Alpine in the constructors’ standings; Stroll was again strong in a race of high attrition finishing sixth, with teammate Vettel eighth, Verstappen splitting the green cars in seventh. Hamilton was ninth on a forgettable day for the seven-time F1 World Champion, with Gasly hanging in to take the final point for AlphaTauri.

A final word on Russell who was the last of the runners after a mistake-strewn race, exacerbated by the early change to slicks, in what will go down as one of his worst weekends thus far as a Mercedes driver. 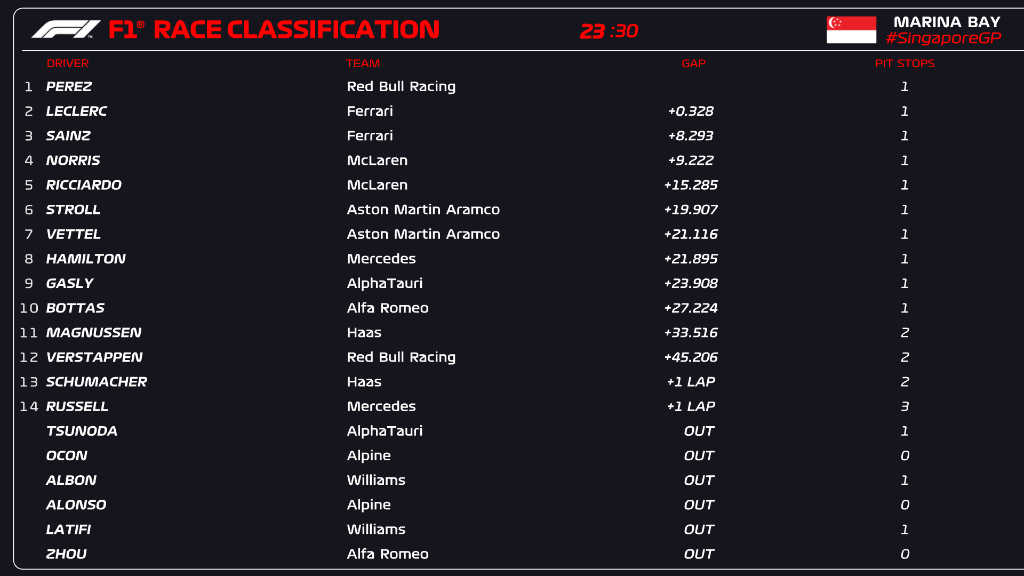 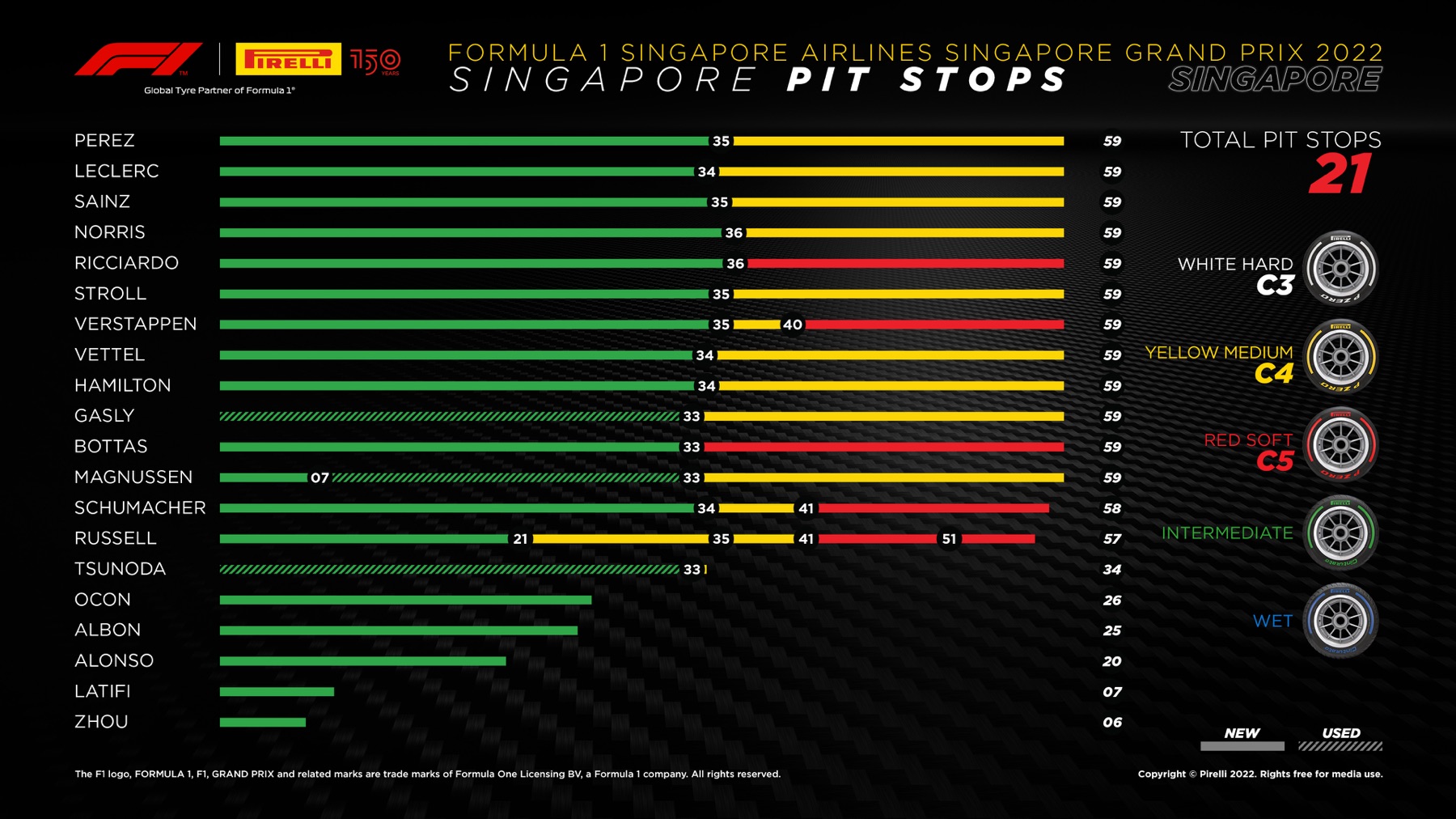 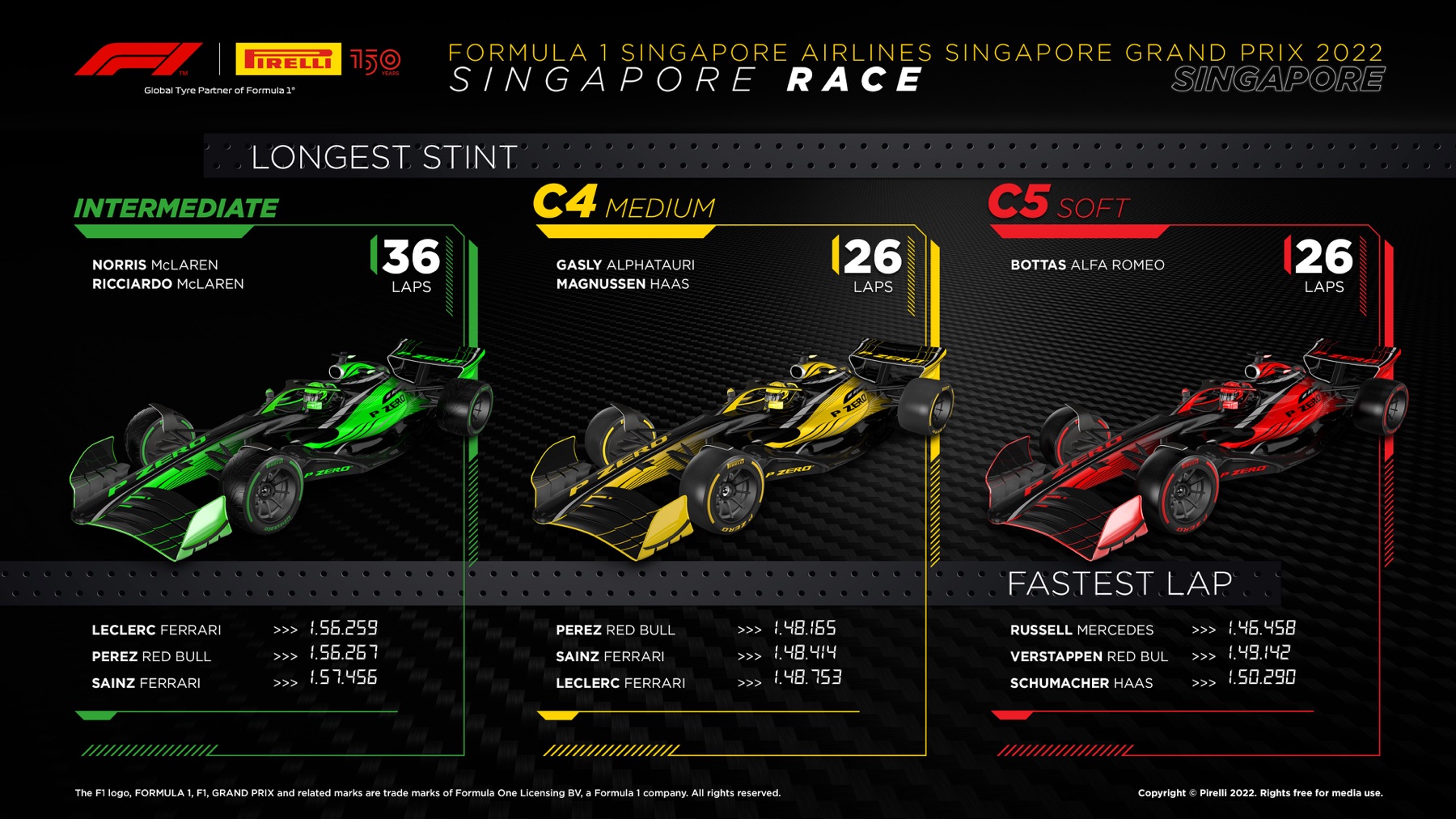