Perez: Chance to attack Charles and go for the win 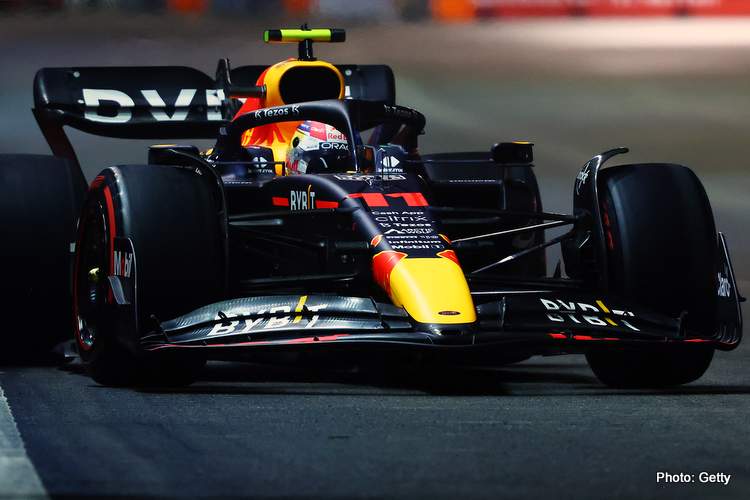 Sergio Perez will start the 2022 Singapore Grand Prix from the front row where he intends to attack pole winner Charles Leclerc, the Red Bull driver sniffing a chance of fourth Formula 1 victory for his CV.

With teammate Max Verstappen victim of bad ‘fuel maths’ and only good for eighth, Perez will be looked on to fly the flag for Red Bull, harass Leclerc and go for victory while his teammate finds his way to the sharp end, as he tends to do.

A mere 0.22s was the difference between Perez and Leclerc’s top times in qualifying at Marina Bay Circuit, which clearly inspired the Red Bull man: “It is a chance from the start to attack Charles and go for the win.

“I was quite disappointed to miss out on pole by two hundredths but it is a great team result and they did a fantastic job with the right calls out there so very happy. It was so tricky to learn the conditions. It could be wet again so it will be crucial not to make any mistake, that will be critical for us,” explained Perez.

Later in the team report, he added: “I think we have done a solid job today, the Team made great calls and we managed to get an excellent result in the end after our worst Friday of the season yesterday; we didn’t have any mileage and we had issues with set-up too, so we didn’t have a read on things, but we went back over things and have come out strong.

While Verstappen could wrap up the 2022 F1 title on Sunday, the Mexican is embroiled in a threeway battle with Leclerc and George Russell for second place in the drivers’ standings – 16 points between the trio.

Red Bull are on the verge of being crowned F1 World Champions since 2013, with Ferrari battling with Mercedes for second in the constructors’ standings – 35 points separate the Reds and the Silver Arrows with six to go.