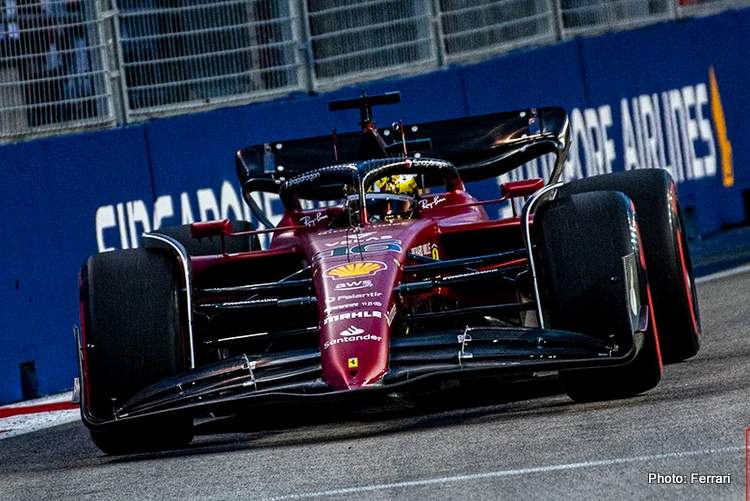 Charles Leclerc took his second pole position at the Marina Bay Circuit in Singapore, after mastering the tricky conditions as Red Bull denied Max Verstappen a chance for pole.

The final part of qualifying was quite tricky to master, as the track was primed for Soft slick tyres with some few tricky wet patches here and there, but it was Charles Leclerc who managed to reign supreme after the chequered flag was waved.

As Q3 started, Lewis Hamilton hit first and went fastest raising hopes for his team and fans that pole maybe a possibility, but as the track dried out, lap times started to fall and the seven-time Formula 1 Champion had to settle for third in the end.

Max Verstappen messed up his initial effort having two purple sectors in the bag, and had to abort his second run with seconds remaining on the clock but made it to the finish line for a third shot.

However, on his final run which was strong and with pole in sight, the Dutchman was called to the pits by his team, and order to abort, seemingly as his RB18 did not have enough fuel to pass the post qualifying scrutineering.

The Red Bull ace was fuming over the team radio demanding an explanation, screaming: “WHY? I don’t get it, mate. What the f@ck is this about?”

A rare mistake from a team that has been operating at the highest level recently, but it is what it is, and Verstappen will have to fight his way up from eighth on the grid in Sunday’s race.

Verstappen’s misfortune ended up being Sergio Perez’s blessing, the Mexican taking second on the grid behind Leclerc.

Leclerc was beaming after qualifying, he said: “Definitely amazing crowd and it is great to see so many people attending the event.

“It has been a very difficult qualifying, Q1 and Q2 with the inters then Q3 we didn’t know what to do and went for the soft at the very last minute and it paid off,” he added.

“We don’t have much data for the race run but with the perfect execution I am sure we can win,” the Ferrari ace concluded.

Second-places Sergio Perez said in parc ferme: “It is an opportunity tomorrow from the start to attack Charles [Leclerc] and go for the win.

“I was quite disappointed to miss out on pole by two hundredths but it is a great team result and they did a fantastic job with the right calls out there so very happy. It was so tricky to learn the conditions.

“Tomorrow it could be wet again so it will be crucial not to make any mistake, that will be critical for us,” a wary Perez concluded.

Lewis Hamilton got painfully close to his first pole since Saudi Arabia 2021, but is still happy to be starting the race from the front row, despite missing out by 0.054s.

“I was pushing so hard. It was, so, so close. I was trying so hard, but these guys are always so quick,” Hamilton said after qualifying.

“I really thought maybe with a perfect lap, which is really hard to get, we could be fighting for first place. I just didn’t have the grip on the last lap.

“Nonetheless, I’m grateful to be on the second row and I’m grateful to the team for continuing to push. We’ll just keep biting down and hopefully tomorrow will be a better day.

“To lose out by that bit is OK. We’ll get up and fight again tomorrow,” the Briton concluded.

Plenty of opportunities for both drivers in tomorrow’s race. pic.twitter.com/IkXoTHBtNx

The top three were separated by a negligible 0.054s, as Carlos Sainz in the #55 Ferrari took fourth, 0.171s off his teammate’s pace.

Fernando Alonso, who set the fastest lap in Q3 at one point, was fifth fastest in the Alpine, 0.383s behind his compatriot.

Lando Norris made good use of his heavily upgraded MCL36, and went on to take sixth fastest, 0.618s behind Alonso in the Alpine, showing McLaren still have work to do to overhaul their rivals for fourth in the Constructors’ Championship.

Pierre Gasly put his AlphaTauri seventh on the grid, 1.799s down from pole, followed by Max Verstappen in eighth.

Kevin Magnussen did well to enter Q3, and ended up ninth fastest over too seconds away from the benchmark, as Yuki Tsunoda made rounded off the top ten, 0.410s behind the Dane. 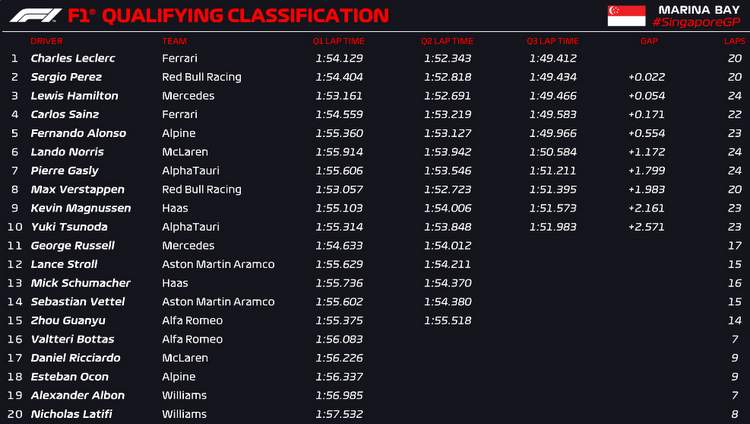 Intermediate tyres were the name of the game as well in Q2, as the drivers deemed the track not yet ready for slicks, but Charles Leclerc felt it won’t take time to make the shift.

“It is drying up quickly,” he told the Ferrari pit wall as all drivers took to the track on the green-banded intermediates.

With six minutes remaining from Q2, Leclerc pulled the trigger and asked his team to put him on slick tyres, but his team overruled his decision and boxed him for Intermediates.

Aston Martin however were the brave who went for dry Soft tyres, but that backfired, as both drivers were not able to improve their times. They were both out in Q2.

That’s the end of qualifying for us in Singapore.

With Q2 over, Charles Leclerc took over from Max Verstappen and went fastest of all leading the field into Q3, with a 1:52.343.

Lewis Hamilton was second fastest, 0.348s behind Leclerc, as Verstappen was third fastest, 0.032s behind the Briton.

Q2 saw the second surprise of qualifying, as George Russell was the first to lose out, only 11th fastest missing out on Q3 by a painful 0.006s.

“Sorry guys I couldn’t do anything, I really struggled, It was exactly the same issue as in P1, what a shame,” Russell told his team over the radio.

Lance Stroll was 12th fastest, after Aston Martin’s gamble backfired. The Canadian was 0.199s behind Russell, as Mick Schumacher was 13th fastest.

The Lion of Singapore ends his final Marina Bay qualifying in P14.

An early call for slicks wasn’t to be #SingaporeGP #F1 pic.twitter.com/NZH3ldeRLg 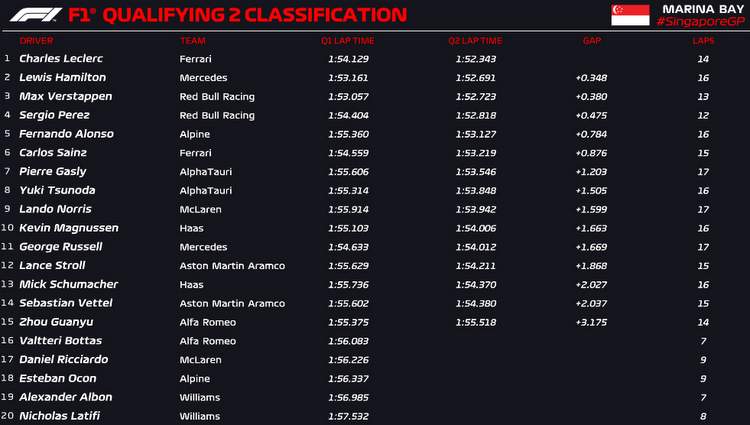 After the downpour that hit the track earlier on Saturday for FP3, Q1 started in drying conditions, as all teams sent their drivers out on track on Intermediate tyres.

“It is still a bit too damp, so I think inters are OK,” Lando Norris reported to his team over the radio.

George Russell is at the front of the queue for Q1

Everyone’s on Intermediate @pirellisport rubber for now… but how long before it dries up enough for slicks? #SingaporeGP #F1 pic.twitter.com/bdiGnVFpbQ

As the track kept drying off with every lap, the times kept dropping and it was a matter of who puts in the best lap as late as possible.

With Q1 over, Max Verstappen lead the way into Q2, fastest of all, with a 1:53.057, followed by Lewis Hamilton 0.104s behind, as third fastest was Charles Leclerc one second away from Verstappen.

On the other end of the grid, first to lose out on a spot in Q2 was Valtteri Bottas who was 16th fastest and missed the cut by 0.169s.

Behind the Finn by 0.143s Daniel Ricciardo was 17th fastest in the old spec McLaren as his teammate Lando Norris made the cut into Q2.

The first surprise of the session was Esteban Ocon who failed to make it out of Q1, and only good for 18th with a 1:56.337, after suffering from overheating brakes.

“Ah the brakes guys, I had no brakes on that lap,” the Frenchman complained to his team over the radio .

Alex Albon was 19th fastest for Williams, with his teammate Nicholas Latifi 20th in the sister car. 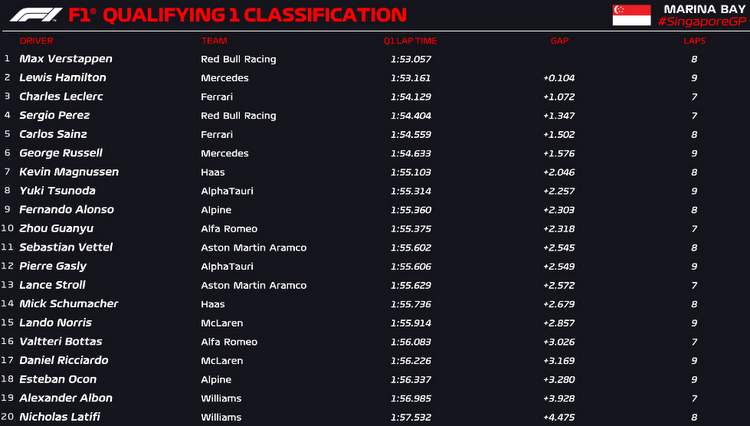