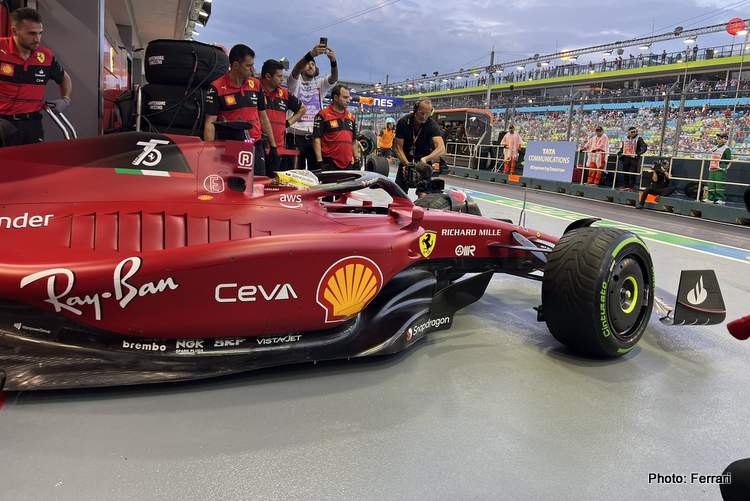 Charles Leclerc went fastest at the end of a wet FP3 for the 2022 Singapore Grand Prix, after the session was stopped for 30 minutes.

FP3 started on time, but the pitlane exit remained closed for 30 minutes as the Safety Car did exploratory round around the Marina Bay Street Circuit to check the status of the track surface.

In the end of the session, Charles Leclerc went fastest, half a second clear than second-placed Max Verstappen in the Red Bull, as this season’s rivals were in a class of their own in the changing conditions.

Carlos Sainz was third in the sister Ferrari.

Next up… QUALIFYING! #SingaporeGP #F1 pic.twitter.com/k9x2tBf0dY

Day two at Singapore, and there is much to look out for, especially with Max Verstappen and Red Bull nowhere near the top of the timing sheets in FP2.

The reigning Formula 1 Champion shrugged off any concerns putting his lack of pace in second practice down to Red Bull trying some stuff that took too long to change on the car, hence the lack running and pace.

Nevertheless, we have to look at FP3 to see how and if the Championship leaders bounce back, something we’ve seen before between Fridays and Saturdays.

Ferrari seemed decent, with Carlos Sainz leading Charles Leclerc, but don’t discount the Monegasque who was setting competitive times on harder tyres than his teammate, so there is more pace to come from the #16 F1-75.

Lewis Hamilton sprung a surprise, fastest in FP1, while George Russell filled the void Verstappen left in the top three in FP2, so it would be worth monitoring how the Silver Arrows progress with their weekend.

And then we have the weather, it’s been raining since morning in Singapore, and the it remains so just before the start of FP3.

⚠️ FP3 will start on time but the pit exit will remain closed#SingaporeGP #F1 pic.twitter.com/N3Tk5DPgVh

Eight minutes into the session, the Safety Car was sent out on track to investigate the conditions before any decision is taken in terms of running.

The @MercedesAMG Safety Car is out testing the conditions ahead of FP3 🛶#SingaporeGP #F1 pic.twitter.com/ywhttaPVY6

Finally, and halfway through the session, the pitlane exit was opened and the drivers were unleashed out on the wet track, a the rain stopped.

In case more rain hits at qualifying time, the teams and drivers would be keen to get a taste of some wet weather driving around the Marina Bay Circuit.

The first driver to venture out on track was AlphaTauri’s Pierre Gasly with full wet tyres bolted on his AT03. He was soon followed by teammate Yuki Tsunoda.

Pierre Splash-ly is the first driver out on the slippery Singapore streets 🫧 #SingaporeGP #F1 pic.twitter.com/TViUVlWSed

Valtteri Bottas who joined the AlphaTauri drivers on track, reported that the track was ok, with no major issued with standing water, even suggesting a switch to Intermediate tyres.

“I actually think the inters might be better,” the Finn said over the radio, and indeed, Max Verstappen drove his RB18 out of the team’s garage on Intermediate tyres, soon after Bottas’ feedback.

It’s getting dryer out there…

Verstappen heads out on the intermediate tyres 👀#SingaporeGP #F1 pic.twitter.com/RlrVW9SEHe

Nicholas Latifi brought out a brief Yellow flag, as he over shot into Turn 13, the Canadian complaining about his steering to the team.

The drivers went on lowering those lap times, lap after lap, trading blows as the track started drying up, with a few Yellow flags popping out every now and then as some drivers missed their braking points in the tricky conditions.

Towards the end, the drivers head towards the start/finish line for some practice starts.

Charles Leclerc registered a lap time of 1:57.782 to go fastest of all at the end of FP3, as Max Verstappen was 0.526s behind in second place.

Carlos Sainz was in third place, 1.066s off his teammate’s pace, and 0.581s ahead of compatriot Fernando Alonso who was fourth fastest in the Alpine.

Sergio Perez posted the fifth fastest time in FP3, 1.744s off the top time, with Lance Stroll following in sixth, the Canadian 0.847s further down the road.

Esteban Ocon was seventh fastest in the other Alpine with a 2:00.911 as Sebastian Vettel was 0.096s slower than the Frenchman in eighth position.

George Russell was ninth fastest for Mercedes, 3.228s off the top time, as Daniel Ricciardo rounded off the top ten, 0.026s behind the Briton. 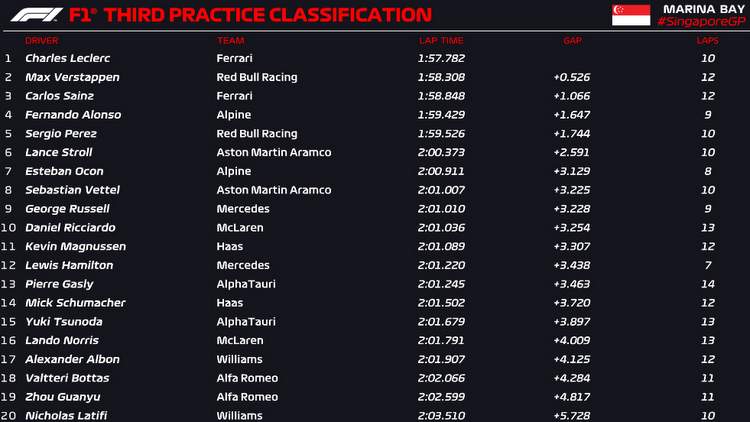