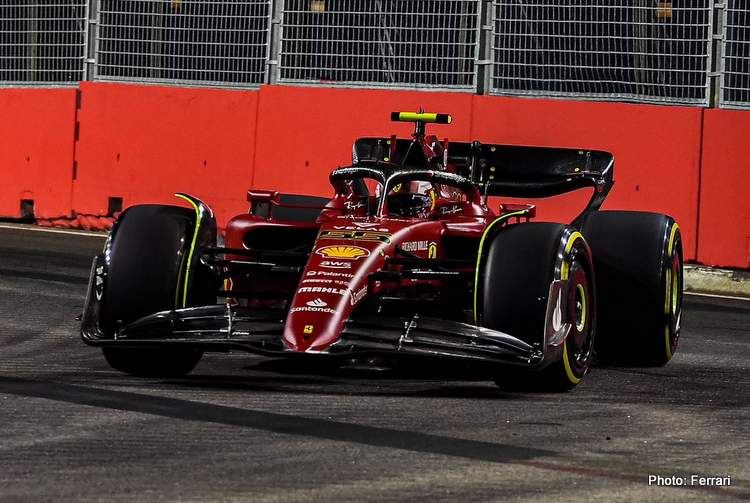 Carlos Sainz finished FP2 for the 2022 Formula 1 Singapore Grand Prix fastest of all, as Charles Leclerc was second fastest while Max Verstappen had a troubled session.

Verstappen spent most of FP2 in the team garage, and only managed a eight laps finishing fourth fastest, as Carlos Sainz enjoyed a smooth session to go fastest of all.

Charles Leclerc spend a considerable time in the Ferrari pits as well, as the mechanics did extensive work on his F1-75, but recovered to go second fastest.

With FP1 for the 2022 Singapore Grand Prix held in daytime, as opposed to the qualifying and the race which will be both at night, not much could be read into the timings.

Despite Lewis Hamilton going fastest in the first practice session, Mercedes will not be under any illusions for the race, as the Red Bull/Max Verstappen combo was quick straight out of the box and haven’t showed their hand yet.

Ferrari on the other hand cannot be discounted, as Charles Leclerc – despite his brake problems in FP1 – managed to be third fastest after limited running.

McLaren’s upgrade package remains a mystery, as Lando Norris was 19th fastest in FP1, Daniel Ricciardo was 12th in the old spec MCL36, which means the Woking squad need more time to understand and dial in their new package.

This makes FP2 more interesting to follow and monitor how the teams buildup their performances through the weekend.

The floodlights were on for FP2, as the teams and drivers head out to the glittering Marina Bay Street Circuit for the second time in the weekend, the first session to be held at night, mimicking the qualifying and race conditions.

The floodlights are on and we’re ready for FP2 🤩#SingaporeGP #F1 pic.twitter.com/ccA1ldA32L

Pirelli came to Singapore with their tyres on the softer side of their range. They brought their C3 (Hard), C4 (Medium), and the C5 (Soft).

With #SingaporeGP Friday practice just around the corner, take a look at the #Fit4F1 compounds in action this weekend! 👇#F1 #Formula1 #Pirelli #Pirelli150 @F1 pic.twitter.com/rrQlYUWh51

The teams started with Medium and Hard compounds as is the usual practice for FP2, to then switch to Softs for qualifying runs, followed by high fuel runs on Softs as well.

George Russell was the first driver to set a time in FP2, clocking a 1:44.662 on Medium tyres, only to be eclipsed by Lewis Hamilton who went fastest by over five tenths shortly after – also on Mediums.

Sebastian Vettel had a moment early on in the session as Kevin Magnussen shortly after that overshot at Turn 14, but no drama there, he drives away in one piece.

Nicholas Latifi reported problems with his seatbelt shortly after driving out of the pits, and went straight back to sort them out.

Charles Leclerc started FP2 on the back foot yet again, as he remained inside the Ferrari garage with the floor of the F1-75 removed for some repairs.

George Russell has a similar error to the one he did in FP1, going straight to the barrier at Turn 12, but did not touch this time. He brought out a brief Yellow Flag though.

Notably, and 20 minutes into the session, none of the Red Bull drivers had made an appearance on track yet. Along with Charles Leclerc, Max Verstappen and Sergio Perez were the only three driver no to venture on track at that point.

Pierre Gasly also went off track at Turn 18, ending up in the run-off area, causing another brief Yellow Flag as the Frenchman reversed back on track.

Verstappen finally took the track after 25 minutes, with Hard tyres bolted to his RB18, and went fifth fastest, 1.414s slower than Carlos Sainz, fastest at that point but on Medium tyres.

Charles Leclerc was getting ready to get on track, as he jumped into his Ferrari, halfway through the session.

Leclerc set out on Medium tyres, and was second fastest immediately with an impressive lap of 1:43.412, over six tenths slower than his teammate’s time that was on Soft.

With the session past its halfway mark, drivers started shifting to Soft tyres and set out for some qualifying runs, as Leclerc kept registering some really fast times on Medium tyres, under three tenths slower than Sainz’s times on Softs.

In quite a dramatic incident, Pierre Gasly’s AlphaTauri ignited out of the air box, while in the pits and being rolled back into the team garage. The team extinguished the fire quickly, and the Frenchman was unharmed.

The Frenchman escaped the cockpit and injury after his AlphaTauri car suddenly caught fire before the flames were extinguished #SingaporeGP #F1 pic.twitter.com/Iqzg4TPO1S

After just three laps for Verstappen, he was back in the team garage, as they mechanics started working on a suspension change for the #1 RB18.

With less than five minute remaining, Verstappen went out on track on brand new Soft tyres, to try a qualifying while he could. The Dutchman could only go fourth fastest.

Credit has to be given to Leclerc though given the limited running he had compared to Sainz.

George Russell was third fastest for Mercedes, 0.324s off Sainz’s pace, as Max Verstappen could only muster fourth, 0.015s further behind the Briton.

It was a troubled session for the 2021 F1 Champion running only eight laps, and not a good one for Red Bull overall as Sergio Perez was down in ninth, the Mexican 1.319s off the pace.

Lewis Hamilton registered a 1:43.182, having survived a moment at Turn 1 late in the session, and was fifth fastest, and 0.271s slower than Russell.

Esteban Ocon went one place better in FP2, sixth fastest, compared to seventh in FP1, the Frenchman 0.825s down from the top time.

Valtteri Bottas was seventh fastest for Alfa Romeo, 0.019s behind Ocon, while Fernando Alonso was eighth, less than a tenth behind the Finn.

As mentioned, Perez was ninth fastest, 0.076s ahead of Aston Martin’s Lance Stroll who rounded off the top ten. 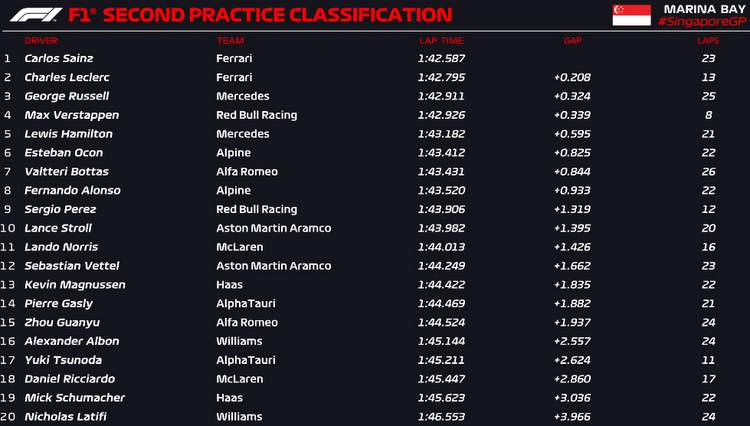