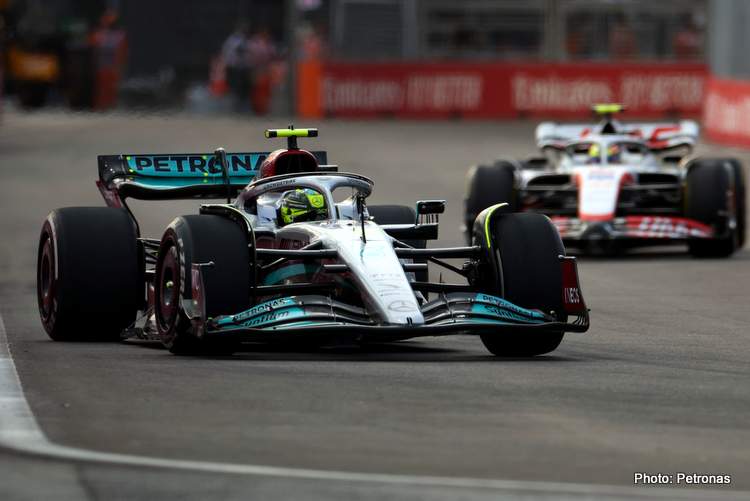 Max Verstappen lead the session most of the time, but a late effort from Lewis Hamilton put him top of the timing screens while the Dutchman was on a high fuel race simulation.

Hamilton’s best time came very late in the session, and was less than a tenth faster than Verstappen’s, who set his fastest lap earlier.

It might have been down to the track evolving, as one cannot discount the 2021 Champion having more pace in him to be unleashed later through the weekend.

Charles Leclerc who suffered from brake problems early on in the session was third fastest for Ferrari.

It is worth noting that FP1 is held in a time and conditions that are not representative to the race and qualifying, so expect FP2 to be more indicative in that regard.

Formula 1 is back in Singapore’s Marina Bay Circuit, after a two-year absence due to the Covid-19 pandemic, and the space between the 2022 Italian Grand Prix at Monza and this weekend’s Singapore Grand Prix has been a bit of a mini summer break.

It’s a very tough track for F1 drivers, so let’s see of the race’s two-year hiatus means the drivers have forgot how tough it is to race an F1 car around the Marina Bay Ciruit.

Anyhow, we’re back racing this weekend and the hype is around Championship leader Max Verstappen, whether he can secure his second F1 Title this weekend. The chance is there but it means the Dutchman winning while Ferrari and Leclerc mess things up really bad… Really, really bad.

Verstappen must outscore Leclerc by 22 points to secure this year’s Title, but hopefully he doesn’t and we wait another race to confirm what we all know will happen, plus Honda will be happy if the reigning F1 Champion wins his second Crown at Suzuka, at their home race in Japan.

After all, Verstappen is celebrating his 25th birthday this weekend, so focus on that now and keep the Title party till Japan, right?

1, 2, 3… 🎶 Bringing the birthday boy into the garage 🎂 pic.twitter.com/rDulaw1hgQ

Mercedes are fancying their chances of a decent result this weekend, hoping the similarities between Singapore and Monaco make their W13 go well, but then they have to deal with the bumpy nature of the Maria Bay Circuit.

Some might have thought Lewis Hamilton’s exit from his car in Baku was dramatic, but in Singapore – keeping in mind the toll the race places on the drivers, and adding in the bumps – it may be even more dramatic.

What else to say, rain is forecasted for the whole weekend in Singapore and that is always a welcome factor to mix up the field. 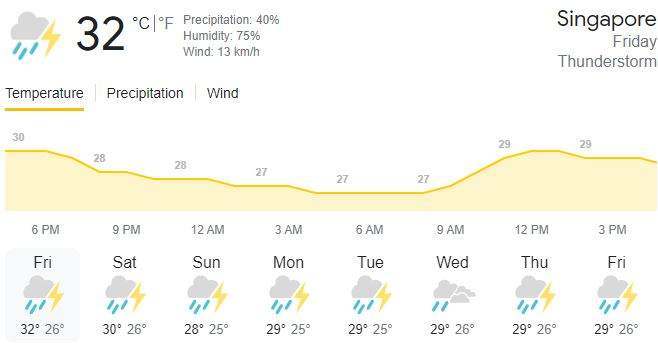 Despite the rain forecast, FP1 went on in dry conditions, as all teams set out to work on their F1 machinery, the drivers getting re-acclimatized with the Marina Bay Circuit.

Let’s start with a mention of some of the updates the teams have brought to Singapore, as it seems only Mercedes, Ferrari, Alfa Romeo, and Haas have not updated their cars.

Other than that, Red Bull has brought new floor fences to their RB18, with Alpine bringing a new floor with revised floor body and edges.

AlphaTauri has a new front wing on their AT03, while Williams brought new rear brake winglets, as Aston Martin have a revised floor edge on their AMR22, which should have their innovative rear wing in us as well.

McLaren brought quite some items, including a revised sidepod design, a floor with new fences and body, an updated diffuser and a new front brake ducts. Let’s not forget their special livery.

McLaren’s updated were only bolted on Lando Norris’ car, as Daniel Ricciardo ran the previous specification.

It was also good to have Alex Albon back in the car after his scare with Appendicitis complications, but the Thai driver insists he good to go.

Lovely to see Albono back in action 😊#SingaporeGP #F1 pic.twitter.com/t0XroiEzU4

Early on, Charles Leclerc reported he was not happy with the brakes on his F1-75, saying: “Are the brakes good? I think there is something wrong.”

The team responded there was nothing wrong they could see, but the Monegasque was soon back in the pits and out of his cars as his teams set to work on it.

Not an ideal start for Leclerc, while in the meantime, Max Verstappen wasn’t wasting any time, and laying down a marker going fastest with a 1:47.329.

A little over ten minutes into the session, Mercedes’ George Russell brought out a brief Yellow flag, missing his braking at Turn 5 on cold Hard tyres, going head on into the barrier, with no visible damage on his from wing.

He duly returned to the team pits for checkups.

“I went in straight on, there’s nothing wrong with the steering or anything like that,” the Briton reported over the team radio.

That was CLOSE George! 😲

The Mercedes driver taps the barrier as he locks up

Back to the pits he goes #SingaporeGP #F1 pic.twitter.com/nfhRbajwXp

Lando Norris, 20 minutes into the session, reported quite some bouncing on the straights, as the Briton was trying out his upgraded MCL36 covered with flow-vis.

In the mean time, Charles Leclerc remained in the team garage watching FP1 proceedings over the screens, as his team worked to fix his F1-75.

The Monegasque driver is forced to watch on from the garage for now…. #SingaporeGP #F1 pic.twitter.com/ytckRn1oo9

However, the Ferrari ace didn’t have to wait much longer, as he was back on rack with almost 35 minutes of running time remaining.

His first effort after repairing his brakes was a 1:47.623, only good for 12th fastest.

Towards the final 20 minutes, Russell reported “Torque Overrun” in Turns 8 and 9, he said over the team radio: “What’s going on with this torque overrun in Turns 8 and 9? Do you see it?”

The team reported back that the error is on the data, and will be investigated and the Briton was asked to lock the differential.

Carlos Sainz has a moment as his car snapped at Turn 5 but was able to correct it. Lance Stroll on the other hand was not as lucky, as he lost his car at the same place, but hit the wall hard, damaging his rear left suspension, bringing out the Red Flag.

The session was resumed with a little over 15 minutes remaining, with Sainz heading out for another qualifying run after the error on his first one.

He also made a mistake, running wide at the final corner, but also keeping it out of the walls, but was over a second slower than Verstappen.

With ten minutes remaining, Leclerc set out on a qualifying run with brand new Soft tyres bolted to his car, recording the fastest middle sector but still slower than Verstappen. He was up in second behind the Dutchman.

In the final minutes of the session, Sergio Perez reported losing drive on his RB18, but was close to the pit entry, as the team instructed him to pit which he duly did, not affecting the proceedings.

Verstappen had a moment at Turn 16 while on a long run with a heavy fuel load, but survived to fight another day, as Lewis Hamilton put in a fast lap to go fastest where he remained.

Max finds himself pushing a bit too hard and runs deep 😲

The Dutchman is forced into a quick pirouette to continue on 🔄#SingaporeGP #F1 pic.twitter.com/E8gR4p3fGP

Charles Leclerc was third fastest for Ferrari 0.402s off the pace, as Sergio Perez was four tenths further down the road in fourth.

Lewis leads the way in FP1. Let’s keep this up, Team. 👊 pic.twitter.com/gg2aFu3IB1

Goerge Russell was fifth fastest, 1.033s off the pace of his teammate, as Carlos Sainz was sixth fastest, 0.072s slower than the Briton.

Esteban Ocon was seventh fastest for Alpine, 1.703s down from the top time, while Lance Stroll – who ended his session early crashing into the barriers – was eighth fastest for Aston Martin with a 1:45.221.

Pierre Gasly was ninth in the AlphaTauri, 2.225s off the benchmark, with Spaniard Fernando Alonso less than a tenth behind the Frenchman in tenth. 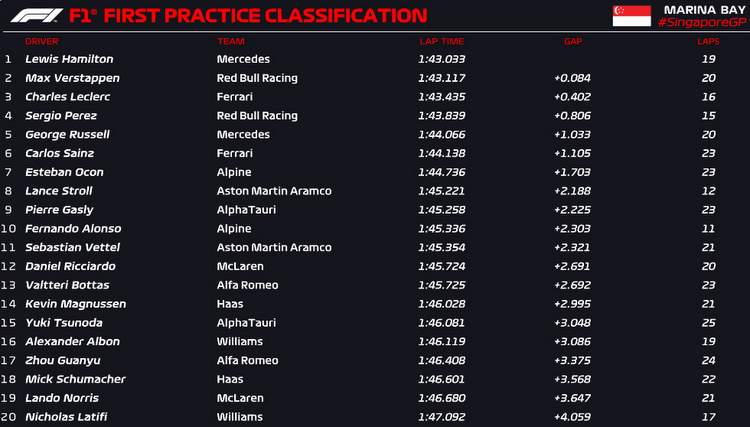