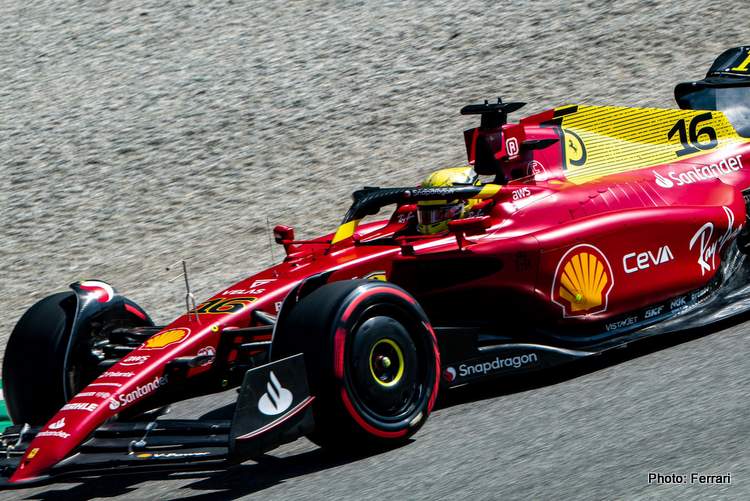 Charles Leclerc did not need Max Verstappen’s penalty to start the 2022 Italian Grand Prix on the front row as he took a commanding pole in front of the delighted Tifosi.

All the signs where towards a Max Verstappen and Charles Leclerc fight for pole, and indeed, it was the Monegasque that clocked the fastest time at the end of Q3 as Red Bull’s speed seemed to go AWOL in the end.

Verstappen clocked the second fastest time but will would have to serve a five-place grid penalty ahead of Sunday’s race for taking on a new Internal Combustion Engine (ICE), being one of nine other drivers having power unit-related grid penalties.

The signs were clear from FP3, that the Dutchman was fastest, more than three tenths of a second clear of Ferrari’s Leclerc, but the latter turned the tables come Q3 and stuck his F1-75 on pole.

Leclerc fastest time was 0.145s clear of the reigning Formula 1 Champion’s best efforts, as Carlos Sainz was third fastest 0.268s slower than his teammate despite showing some earlier promise.

Sainz will have to start the race from the back of the grid after Ferrari decided to take on new power unit components.

In the end, Leclerc started Ferrar’s 75th anniversary celebrations perfectly, with the hope that he can finish the job on Sunday.

“It is amazing,” Leclerc said in parc ferme after qualifying. “It wasn’t an easy Qualifying session but I knew we had the potential in the car.

After being favorite for pole, Verstappen had to settle for second best. He reflected on his qualifying in Monza saying: “It was close but of course we chose to go for a little bit more downforce around here and on one lap it is maybe not the best.

“I think for tomorrow it can be quite strong and also knowing we have to start a bit back. All in all, it was a good lap and I enjoyed it. I think it will be an interesting day tomorrow,” the Dutchman added.

Sainz lamented having to start from the back at Ferrari’s home race, especially with the pace he is enjoying in the F1-75.

“It was honestly a very good qualy session,” said Sainz. “I was feeling very well and I was pushing flat out through Q1, Q2 and Q3, the only issue is I didn’t have a tow and this probably cost me a few tenths battling for position.

“But I am starting at the back tomorrow so it doesn’t change my life. I had to take some risks to compensate for the lack of tow.

“I was quicker in every corner but slower in every straight so I couldn’t improve much,” the Spaniard concluded.

As we look at the rest of the drivers outside the top three, below are the grid penalties that will be applied to nine drivers on the grid before Sunday’s race.

Behind the top three, Sergio Perez was fourth fastest, over one second off the pace of Leclerc, a concerning result for the Mexican who also has a ten-place grid penalty to serve for the race.

Lewis Hamilton, who has to start the race from the back of the grid for taking a new power unit courtesy of his clumsy crash with Alonso at Spa – was fifth fastest a whopping 1.363s off pole.

George Russell was sixth fastest, 0.018s slower than Hamilton, but will start the race on the front row alongside Leclerc after all the drivers ahead of him serve their penalties.

Lando Norris qualified seventh fastest with a 1:21.584, as Daniel Ricciardo was an impressive eighth, but still over three tenths slower than his teammate. Both will benefit from the penalties of the drivers ahead.

Pierre Gasly was 2.487s down from the best time in ninth, as Fernando Alonso rounded off the top ten without setting any lap time in Q3. 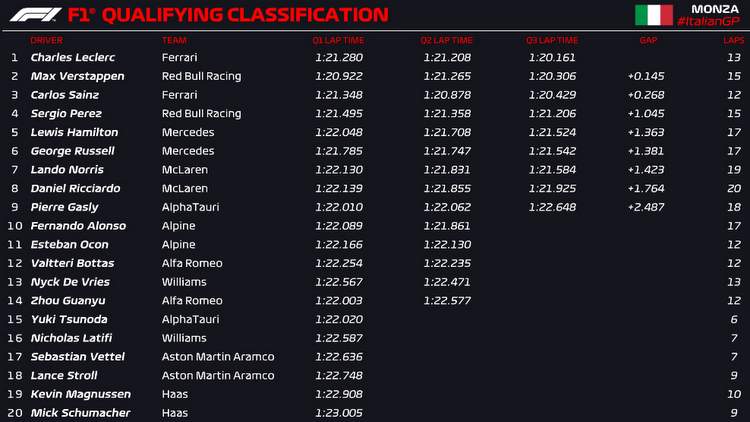 Carlos Sainz took over the lead from Max Verstappen at the end of Q2 going fastest of all, followed by the Charles Leclerc in second, 0.330s adrift, while Verstappen was third an extra 0.057s further down the road.

The top three did only one run on used Soft tyres in Q2.

The first driver to lose out on Q3 was Alpine’s Esteban Ocon, 11th fastest, but has a five-place grid penalty to serve on Sunday. He missed the cut by 0.068s.

De Vries made a mistake on his second flying lap, which meant he could not advance to Q3, but has to be givern credit for his impressive debut. He will probably start the race within the top ten once all grid penalties apply.

Zhou Guanyu was 14th fastest in the other Alfa Romeo, while Yuki Tsunoda did not run, and was classified 15th fastest. The Japanese will be starting from the back of the grid. 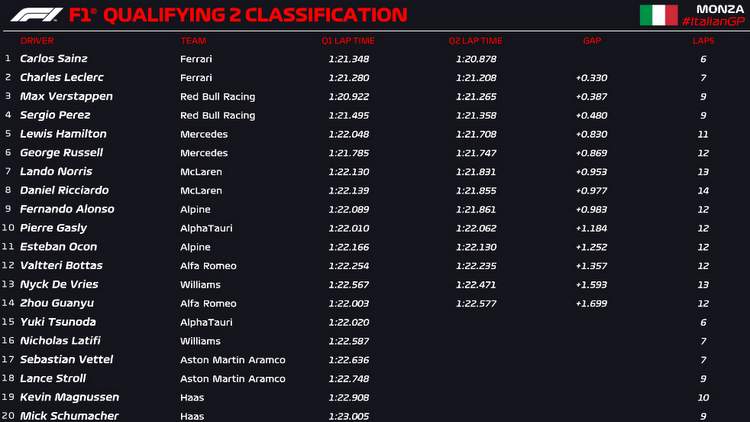 Qualifying kicked off in clear conditions, with a full house of Tifosi at Monza there to support Ferrari over their home weekend where they’re celebrating their 75th anniversary with a special yellow and red livery.

By the end of Q1, Max Verstappen lead the proceedings, going fastest of all with a 1:20.922, over three tenths clear of Charles Leclerc in second, with Carlos Sainz third fastest 0.058s further down the road.

Sergio Perez was fourth in the sister Red Bull 0.573s off his teammate’s pace.

However, the star of Q1 without any doubt was Nyck de Vries, who made the cut into Q2 on his Formula 1 qualifying debut in a Williams while Nicholas Latifi got knocked out and was the first to miss out on Q2.

Latifi was 15th fastest and missed the cut by 0.020s to De Vries, and was followed by Sebastian Vettel in the Aston Martin, the German 0.049s behind the Canadian in 16th.

Lance Stroll also did not make it out of Q1 and was 17th fastest, 0.112s behind his teammate.

The Haas duo occupied the final two spots, Kevin Magnussen in 19th as Mick Schumacher who made a mistake on his final flying lap was 20th.

It remains to be seen how the positions will change when the numerous grid penalties apply ahead of Sunday’s race. 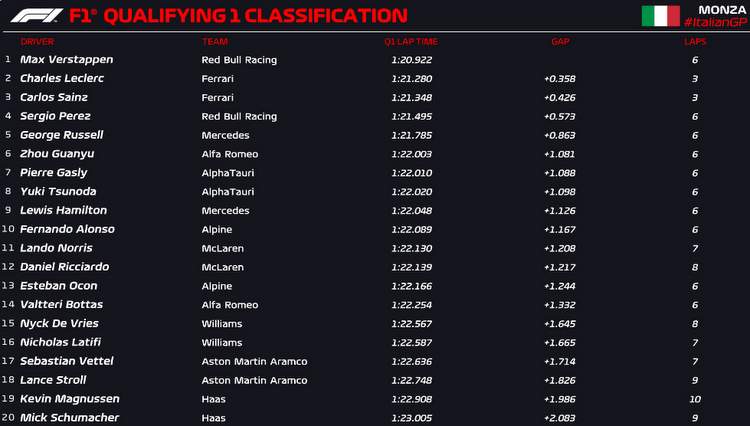