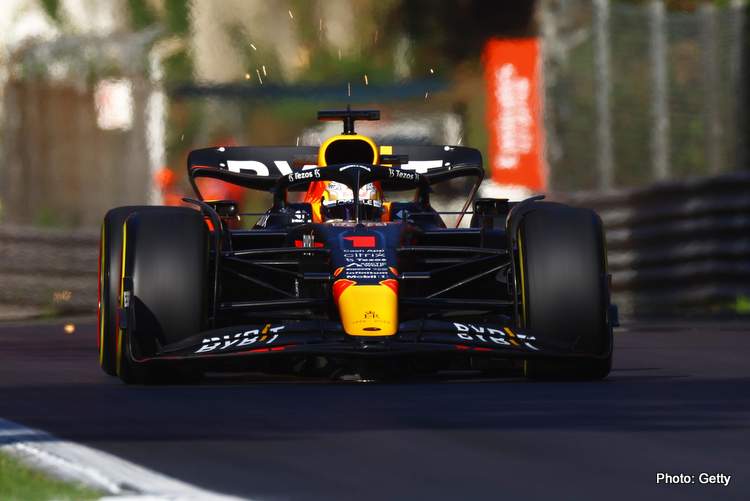 Max Verstappen sent out a clear message of intent after topping FP3 for the 2022 Italian Grand Prix at Monza, over three tenths clear of Charles Leclerc.

The reigning Formula 1 Champion bounced back on Saturday after the Ferrari drivers took turns topping the two practice sessions on Friday at Monza, and went fastest by quite a margin in the final practice session ahead of qualifying.

Leclerc was seemingly struggling to match Verstappen at Turn 6 as he reported over the team radio: “We need to work on Turn 6 especially.

“All the other corners it’s fine. “On Turn 6 it isn’t turning at all,” he added.

Nyck de Vries, who made his proper F1 debut replacing the ill Alex Albon, was 14th fastest. An impressive effort after being called in the last minutes.

De Vries was less than a tenth slower than Nicholas Latifi in the sister car, which just proves how good he is, or then, how lousy a job the Canadian is doing.

A message from the boss as @nyckdevries leaves the garage for his first run in FP3 🙌#WeAreWilliams #ItalianGP pic.twitter.com/d1jWVHjXat

Ferrari started their weekend at home in promising fashion, Charles Leclerc topping FP1 and Carlos Sainz taking over in FP2, on a track they openly admitted would not suit their car.

But early signs shows that F1-75 is not so bad around the Temple of Speed, and with Max Verstappen set for a five-place grid penalty for Sunday’s race, Leclerc wouldn’t be blamed if he dreams to collect another win in front of the Tifosi after that of 2019.

Carlos Sainz was happy about his car’s pace, but the grid penalty he will collect himself as well (25 places) should put him out of contention.

But the long runs showed that Verstappen and Leclerc are very close, and with Verstappen starting from sixth on the grid at best, and should he manage that by being fastest in qualifying, the race on Sunday should be interesting to watch.

More drivers are expected to collect penalties today as well which is going to mix up the qualifying grid quite a bit, maybe giving the likes of Williams and Aston Martin a fighting chance…

Mercedes, though not as bad as they were at Spa, were nowhere near their Zandvoort form, and would be interest to monitor throughout FP3 heading into qualifying to see if they can improve.

Just ahead of FP3, the news broke that Alex Albon was unwell, and hospitalized to be treated from appendicitis, and will be replaced by Nyck de Vries for the rest of the weekend.

Following on from this, we can confirm that the team’s Reserve Driver Nyck de Vries will drive in place of Alex for the remainder of the Italian Grand Prix weekend. Alex is in good spirits and the team wishes him a speedy recovery.#WeAreWilliams #ItalianGP pic.twitter.com/4tgyGBD0BU

We can confirm Esteban will take a new Internal Combustion Engine (ICE) for this weekend’s Italian Grand Prix and therefore he will incur a five-place grid penalty for tomorrow’s race.#ItalianGP

Max Verstappen had an encounter with Mercedes George Russell on his first timed lap, and had to abort it. He went on to clock the fastest time on the second attempt.

“What’s that,” was Verstappen’s reaction on Russell’s block.

Speaking of Mercedes, the team tweeted that both cars will be running black numbers on as a tribute to the late Queen Elizabeth II.

Both Lewis and George will be running black numbers on their cars this weekend as a mark of respect to Queen Elizabeth II pic.twitter.com/b9WIN1n1cA

Valtteri Bottas and Carlos Sainz had a close incident at Turn 1, twenty minutes into the session, the former being on a hot lap, while Sainz was going around at a leisurely pace, unaware that the Finn was coming.

Bottas locked up heavily and ended up in the run-off area, and Sainz was soon announced to be under investigation.

The Dutchman soon brought out the Yellow flags, going too hot into Lesmo 1 and ended up doing an excursion through the gravel trap.

Nyck de Vries finds the gravel at Turn 7 as he gets to grips with the Williams#ItalianGP #F1 pic.twitter.com/YOZgurMTvU

Verstappen had another encounter with Mercedes’ Russell, between the two Lesmos, with Alpine’s Fernando Alonso there as well.

Mick Schumacher remained stuck in the Haas garage with his VF-22 in pieces as the team discovered a clutch problem just as they were getting ready to run in FP3.

Due to a clutch issue discovered during the fire-up on Mick’s car – participation in FP3 will be a challenge but team working to attempt some late laps if possible.#HaasF1 #ItalianGP pic.twitter.com/GdlDfbJ8lM

The German was sent out on track with less than ten minutes remaining, which means he had no real running for this weekend, having sat out FP1 for Antonio Giovinazzi, lost all running in FP2 as his car broke down, and now the clutch problem. He will be thrown in the deep end for qualifying.

With 20 minutes remaining, drivers started heading out on track with new Soft tyres bolted on from some final qualifying runs.

Carlos Sainz’s first effort on Softs was notably slower than Verstappen’s early-session time on Medium, as Charles Leclerc’s first attempt ended with a error at Turn 4.

Here’s a look at the top speeds registered through the speed traps at the Temple of Speed.

Who’s going fastest at the Temple of Speed so far? #ItalianGP #F1 pic.twitter.com/Ozqt8J2b67

Max Verstappen clocked his best time, a 1:21.252 towards the end of the session, while Charles Leclerc could only come with 0.347s close to the Red Bull ace.

Sergio Perez was third fastest, a slight improvement from the Mexican, but still 0.596s off his teammate’s pace.

Carlos Sainz was fourth fastest in the other Ferrari, 0,645s off the pace of Verstappen, as compatriot Fernando Alonso was fifth fastest, 0.409s adrift.

Yuki Tsunoda was eighth fastest for AlphaTauri, 1.178s down from the top, while Esteban Ocon was ninth fastest, 0.076s behind the Japanese.

Proving Mercedes struggles, Lewis Hamilton was down in tenth, 1.315s off the pace. Spa all over again?

Daniel Ricciardo was down in 15th, a miserable session for the Australian, as even Nyck de Vries was faster, albeit by 0.004s 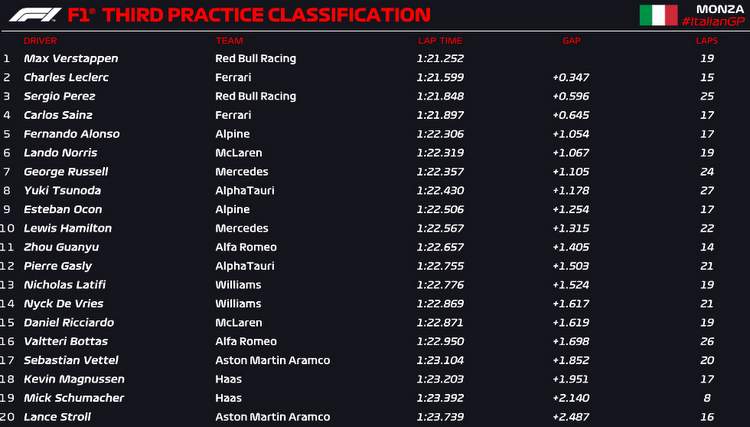