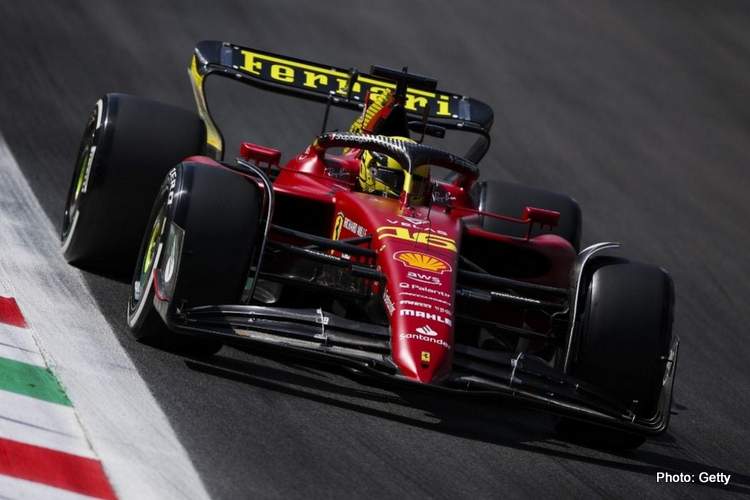 Charles Leclerc went fastest during FP1 for the 2022 Italian Grand Prix at Monza, with teammate Carlos Sainz hot on his heels in second.

It was a decent start for the Scuderia home race as Leclerc and Sainz lead the field at the end of FP1, separated by 0.077s.

However Max Verstappen, supposedly the favorite for the weekend was fifth fastest only, keeping in mind that he was compromised on his hot lap by McLaren’s Lando Norris.

George Russell was almost three tenths off the pace in the Mercedes.

Monza will feature the final race of Formula 1‘s post summer break triple header, and all eyes will be on Max Verstappen can complete the hat-trick, having won at Spa and Zandvoort, and serving Ferrari a blow on their own turf.

And will Ferrari fare will be another question, with their track record this season not reassuring that they may offer the Tifosi reason to rejoice.

The Championship is as good as over for the Reds, but a win at Monza would serve as some consolation for them and the fans who have been massively disappointed by their beloved Scuderia’s fumbling.

But the fact remains that, unless Ferrari have an ace up their sleeve, the F1-75 will struggle to keep up with the rapid RB18 around the Temple of Speed, as Verstappen will most probably crash their party.

But just as things were looking bleak for Ferrari, Red Bull announced that they will be replacing Verstappen’s Internal Combustion Engine (ICE) which will result in a five-place grid penalty for the 2021 F1 Champion.

Can Ferrari capitalize on this, especially that Sergio Perez will be subject to some penalties as well? Maybe Charles Leclerc can do something, but Carlos Sainz will suffer a grid penalty as well for taking a new MGU-K and gearbox.

Mercedes are not expected to run well at Monza, but will they be worse that Spa, after enjoying a rather competitive Dutch Grand Prix? It will be interesting to watch the Silver Arrows this weekend.

The fact that Lewis Hamilton will be taking an extra power unit with the consequent grid penalty will mean the Briton will be on the backfoot even more.

UPDATE: Lewis has taken a new Power Unit for this event – his fourth of the season – and will take a grid penalty for Sunday’s #ItalianGP. pic.twitter.com/RmuX7bgb1O

Just as we were getting ready for F1 action to start at Monza, Porsche announced that talks to enter F1 with Red Bull have fallen through, not that anyone was surprised especially with reports and statements from the Red Bull camp hinting towards this conclusion.

Just before FP1, F1 honoured Queen Elizabeth II, by holding a minute of silence to mark her passing on Thursday. Another silence will be observed before Sunday’s race.

Remembering Her Majesty The Queen pic.twitter.com/fDpnSvtQPd

Also worth noting is that sausage kerbs in the second chicane in Monza have been removed, something that was hailed by all drivers.

Yuki Tsunoda will be receiving a 10-place grid penalty after being handed his fifth reprimand in 2022 last week at Zandvoort for driving his car with loosened seatbelt.

Practice started in dry and sunny conditions on a weekend when Pirelli brought their C2 (Hard), C3 (Medium), and C4 (Soft) compounds for the weekend.

Welcome to the start of the #ItalianGP weekend! Kicking off the home event for #Pirelli, is a quick look at what #Fit4F1 compounds we’ve brought to Monza 👇🇮🇹#F1 #Formula1 #Pirelli150 @F1 pic.twitter.com/9j24TJEC78

A few minutes into the session, a problem emerged for Red Bull as the rear wing on Sergio Perez’s car that was flapping when the DRS was open.

Ten minutes into the session, and after locking up in the first chicane, AlphaTauri called Pierre Gasly into the pits, because of a problem. Gasly was unwell and missed his media duties on Thursday.

After topping the initial part of the session on Hards, Verstappen went out on Soft tyres but his initial effort was compromised by McLaren’s Lando Norris – almost halfway through the session.

Verstappen ended up being over four tenths off the pace of Charles Leclerc, fastest at that point of the session, but was soon dislodged by Mercedes’ George Russell, who in turn was shortly relegated to to third himself by Carlos Sainz.

Verstappen did not attempt another qualifying simulation, but then went on to do some runs on heavy fuel loads which meant he didn’t improve on his time.

Five minutes towards the end of the session, Dutch driver Nyck de Vries had a moment at Ascari with an excursion into the gravel trap, but he kept it together.

Carlos Sainz also had a moment at the Ascari chicane on his final lap, but did well to catch the rear of his F1-75, avoiding a major incident.

Third fastest was George Russell, 0.279s off the pace, followed by Lewis Hamilton in fourth, 0.142s off his teammate’s pace, as it seems to be an encouraging start for Mercedes at Monza.

Max Verstappen was fifth fastest. 0.430s down on Leclerc’s time, but we did not see the best from the Dutchman as his attempt at a hot lap was compromised by Land Norris, after which he settled for long runs.

Esteban Ocon was sixth fastest for Alpine, 0.665s from the top, as teammate Fernando Alonso was behind him in seventh, only 0.024s adrift.

Yuki Tsunoda was eighth fastest in the AlphaTauri with a 1:223.260, with Alfa Romeo’s Valtteri Bottas 0.134s behind him in ninth.

Daniel Ricciardo round off the top ten for McLaren, albeit over 1 second off the pace. Lando Norris was down in 16th. 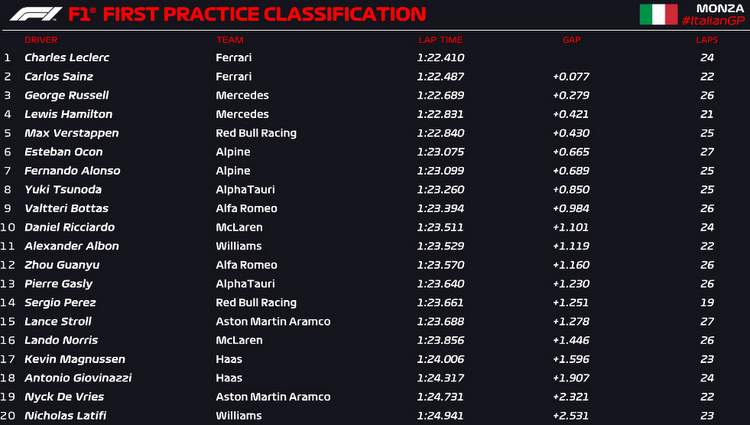