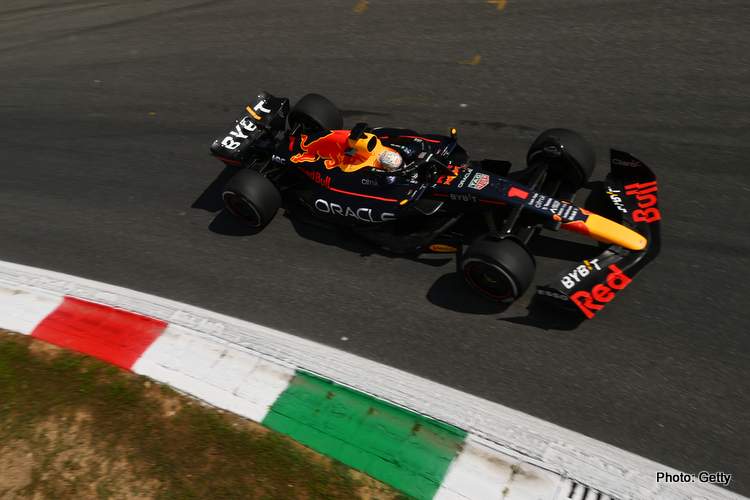 Carlos Sainz made sure Ferrari ended Friday at Monza on top as he was fastest in FP2 for the 2022 Italian Grand Prix, chased closely by Max Verstappen.

Once again, Verstappen did not show his ultimate pace, as he had a scruffy first sector on his qualifying simulation on Soft tyres.

In the end Sainz put together a lap good enough to go fastest from the Dutchman, as Charles Leclerc was third fastest in the sister Ferrari.

Ferrari have been downplaying their chances for this race, but the initial signs show they are not as bad, but one should always be wary of when Red Bull and Verstappen turn on the heat, so FP3 on Saturday would be a better time to start making some predictions.

But what could be taken away from the session is that Leclerc and Verstappen where on another level in terms of race pace.

Ferrari were fastest in FP1 with Charles Leclerc leading Carlos Sainz, but while Max Verstappen did not show his hand yet, it seemed the Mercedes are in a decent place.

What will make matters interesting are the collection of grid penalties we are having, with Lewis Hamilton starting from the back, Max Verstappen starting five places down from where he qualifies, and Carlos Sainz collecting 25 grid positions’ drop, not to mention the midfield cars as well.

Monza will not be as easy a track for Verstappen to overtake as Spa was, with the DRS effect being much less at this track. More of an advantage for Leclerc.

Sebastian Vettel and Mick Schumacher were back in their respective seats for FP2 after making way for Nyck de Vries and Antonio Giovinazzi in the first practice session.

Vettel won his first Formula 1 race in Monza in 2008 when he was driving for Toro Rosso, now AlphaTauri, and this weekend will see him race around the Temple of Speed for the last time as he will be retiring at the end of 2022.

The German has brought a special helmet design celebrating his first win and 100 years of Monza.

The session started with all drivers running the Medium tyres except for Esteban Ocon, Mick Schumacher, and Daniel Ricciardo on Hards.

We’re up and running for FP2

Max Verstappen and Charles Leclerc started trading blows at the top, until the former edged ahead by 0.004s, sitting on top of the timing screens for some time. They were both running Medium compounds.

Leclerc’s first time set in FP2 – which he set on Medium tyres – was 0.1s faster than his FP1-topping time set on Softs, as the drivers started exploring the limits.

Mercedes’ initial runs on the Medium tyres put them 0.7s off the pace with George Russell, and over a second too slow with Lewis Hamilton. It seems the W13 does not enjoy its yellow-banded boots.

With 40 minutes remaining, the drivers started returning to the track with new Soft tyres bolted to their cars for some qualifying runs.

Verstappen had a moment at the chicane as he went out on a qualifying run on new Soft tyres, but then went on to clock a 1:21.807, as Charles Leclerc also aborted his first run on Softs as well.

Midway through the session, Mick Schumacher brought out the Red flags, as his Haas broke down on track, the German reporting to his team: “I have no power. I think I seized the engine or something.”

The team duly asked him to park the car on the side of the track, as Schumacher will also miss another practice session having made way for Antonio Giovinazzi in the morning session.

Mick Schumacher has ground to a halt in his Haas, which brings out the red flag in FP2. pic.twitter.com/q9iVFoTuuT

The session was resumed with 25 minutes remaining on the clock, as most drivers went onto Medium tyres again for some race simulations.

Russell soon after reported: “Deployment is a bit over the place at the moment,” only for the team to report that teammate Lewis Hamilton is suffering from the same problem as well, as Mercedes pace on the long runs nowhere near that of Red Bull and Ferrari.

Charles Leclerc had a moment towards the end of the session, locking his brakes and going through the run off area at Turn 1, after which he reported a bad flat spot on his tyres.

Yuki Tsunoda already in trouble for too may reprimands was announced to be under investigation for failing to react to Yellow flags. It couldn’t get any worse as he’s already starting from the back.

The divers head out to the start/finish line for some practice starts.

Charles Leclerc was 0.050s firther adrift from the Dutchman in third.

Lando Norris was an excellent fourth, after struggling in FP1, but was over six tenths of the pace of his former teammate Sainz.

George Russell was once again the faster of the Silver Arrows, fifth fastest, 0.722s away from Sainz as Lewis Hamilton was down in seventh, 0.117s off his teammate’s pace.

The chequered flag falls and Friday Practice comes to a conclusion. pic.twitter.com/54T6FRTy0m

Sergio Perez split the two Mercedes in sixth, 0.730s away from the benchmark time, a massive 0.587s off his Verstappen.

Esteban Ocon was eighth fastest for Alpine with a 1:22.728, followed by Fernando Alonso in the other Blue and Pink car, 0.024s behind in ninth.

Alex Albon rounded off the top ten in the Williams, 1.171s too slow. 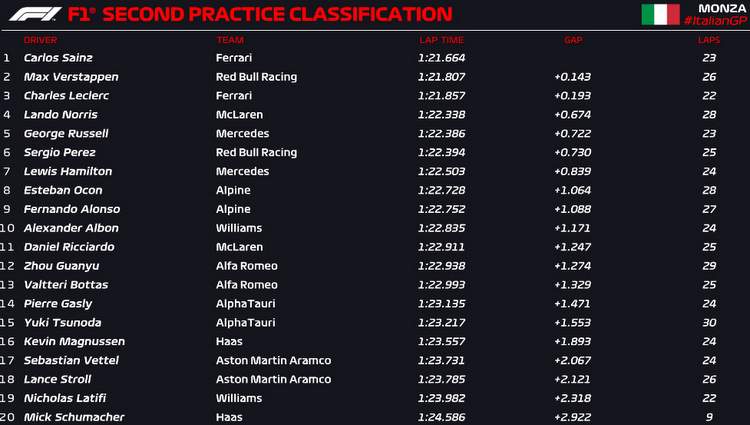