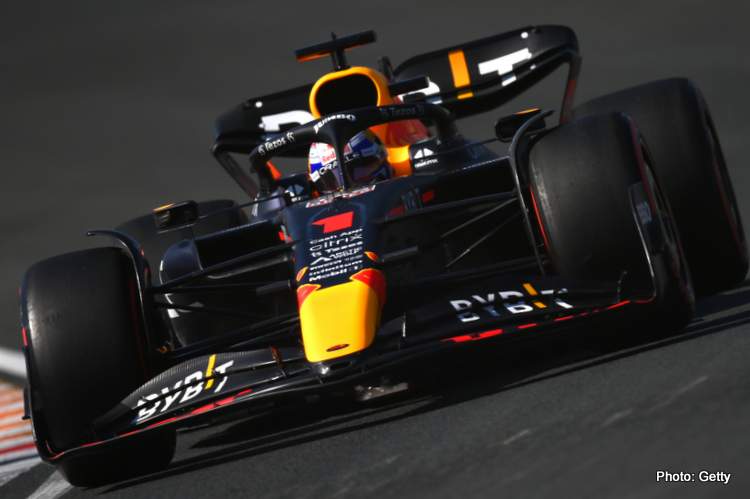 Max Verstappen roared his way towards pole position for his home grand prix at Zandvoort taking it away from Charles Leclerc by the smallest of margins.

The weekend did not start well for the reigning Formula 1 Champion, as he missed out on FP1 due to a gearbox issue, but showed in FP3 that he meant business for qualifying.

Verstappen approached qualifying with confidence, using one set of Soft tyres to go through Q1 and Q2, as Leclerc and Ferrari did not get into the rhythm.

However in Q3, Leclerc gave a warning to his rival with a strong first timed lap as Verstappen messed up his, but the Monegasque messed his final flying lap and ended up losing out to the Dutchman by a painful 0.021s.

Carlos Sainz took third in the other Ferrari, 0.092s off Verstappen time, in what could be the closest qualifying result we have seen in some time.

It was Verstappen’s second pole position at Zandvoort in a row, speaking in parc ferme, he said: “Unbelievable.

“Especially after yesterday as well. We had a difficult day but we worked really well over night with the whole team to turn it around.

“Today we had a quick race car again but it was very close. We changed a lot, because yesterday was a bit rushed in FP2 to get the car together,” the Red Bull man added.

Second placed Charles Leclerc reflected on qualifying, he said: “It was very, very close. Max did a great lap in the end. Our car was getting better and better through qualifying.

“At the beginning I was pretty scared because Max was much, much quicker than us on used tyres, but then in Q3 the car came a bit more together and I managed to do that lap, which was close enough for P2. But tomorrow is the race and we’ll give it all.

“For tomorrow, I think our race pace looks quite strong. It’s going to be close with Red Bull but we just need to do a great start and then we’ll see,” Leclerc concluded.

Carlos Sainz believed he and the team did a decent job, he said: “It was a clean lap with no mistakes, just missing that last half a tenth to a tenth to beat Charles and Max.

“It was on the limit out there, every little metre of track that you could use and that you could push was counting. It wasn’t an easy qualy, but I think in the end we did a decent job.

“I think tomorrow it’s going to be an interesting day. There’s going to be a lot going on, even if it’s a difficult track to overtake, there’s still going to be many options with strategies,” the Spaniard predicted.

In the end, despite Ferrari and Leclerc’s best efforts, it was Verstappen’s day at Zandvoort and he could be denied.

Sound on for the cheers 🙌#DutchGP @Max33Verstappen pic.twitter.com/WhGRSNJGzr

Behind the top three, Lewis Hamilton was best of the rest, taking fourth fastest 0.306s off pole, despite looking good at the start of Q3.

However the Briton was unlucky, as Sergio Perez spun in front of him on his final flying lap denying him any chance to improve.

Sergio Perez was fifth fastest despite his spin, but over seven tenths off the pace of his teammate, and was chased by George Russell in sixth, the Mercedes driver only 0.070s adrift from the Mexican.

Lando Norris was the only McLaren to reach Q3, ending his session seventh fastest 0.832s off the pace, and was followed by Mick Schumacher in eighth.

The German was superb throughout qualifying – while teammate Kevin Magnussen was down in 18th place – but was 1.1s off the pace in the end.

Yuki Tsunoda was ninth fastest for AlphaTauri, 0.114s behind Schumacher, and ahead of Aston Martin’s Lance Stroll who was tenth.

The Canadian did a solid job to reach Q3, but a technical problem meant he could take part in the final top ten shootout, hence his tenth place. 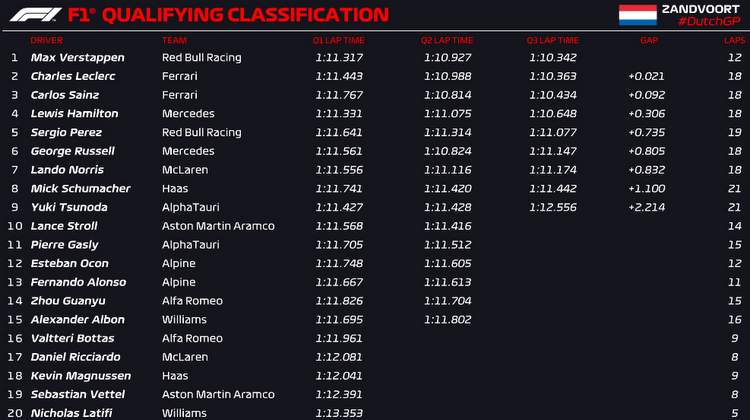 Q2 was Red flagged after less than two minutes , as the an orange flare was thrown in the middle of the circuit, just when Williams’ Alex Albon was making his out lap, which was naturally ruined as he had to return to the pits.

A flare on the track prompts a red flag #DutchGP #F1 pic.twitter.com/DuhP7LIRs3

Carlos Sainz lead the Q2 qualifiers into the top ten shootout, as George Russell, 0.010s behind the Spaniard in the Mercedes.

Max Verstappen was third, 0.113s off the pace with a lap set on a used set of Soft tyres and full of confidence not even bothering to run again.

The first driver to miss out on Q3 was Pierre Gasly who missed out to his teammate Yuki Tsunoda by 0.084s.

Alpine were out next as Esteban Ocon was 12th fastest ahead of teammate Fernando Alonso in 13th 0.008s behind his teammate, which is disappointing for the team that have been Q3 contenders for some time now.

Zhou Guanyu was 14th fastest in the Alfa Romeo, who outqualified his teammate Valtteri Bottas (knocked out in Q1), with a 1:11.704.

Alex Albon could not make it into Q3 this time, and qualified 15th fastest, missing the cut by 0.374s. 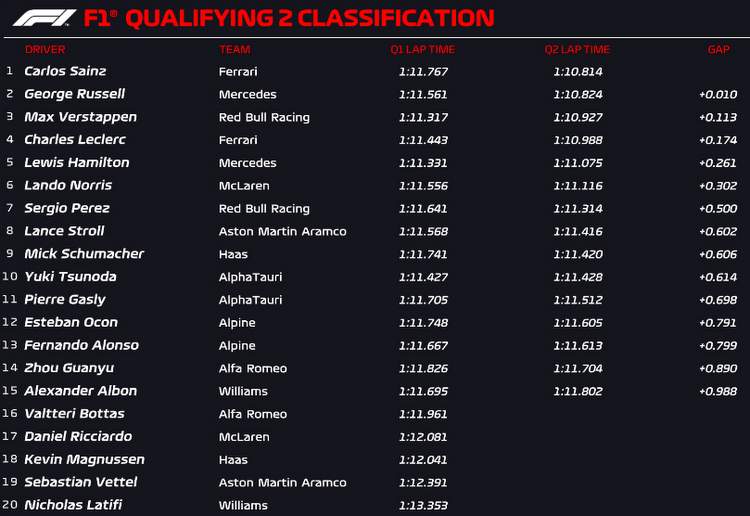 Max Verstappen led the 15 drivers that made the cut from the first part of qualifying with a 1:11.317, followed by Charles Leclerc in second, 0.126s off the pace, as the Dutchman only had to run one hot lap before returning to the pits.

Behind the top two, all the drivers were fighting to make it out of Q1, as the track was evolving fast with lap times dropping the more the cars ran.

Valtteri Bottas was the first of the 20 drivers to head for an early shower, as he could only go 16th fastest, missing the cut by 0.135s.

Next came Kevin Magnussen who was only 17th after a scruffy final effort and was 0.080s off the pace of Bottas.

Daniel Ricciardo’s pains continued as he was knocked out early on, only 18th fastest with a 1:12.081, as Sebastian Vettel was 19th fastest.

Seb was giving it everything in his final flying lap before running wide into the gravel #DutchGP #F1 pic.twitter.com/ikJeRdHcVx

The German was on his way to qualify out of Q1, setting the fastest first sector of the session, but an error at Turn 13, where he ran wide ended his qualifying early. His best time was 1:12.391 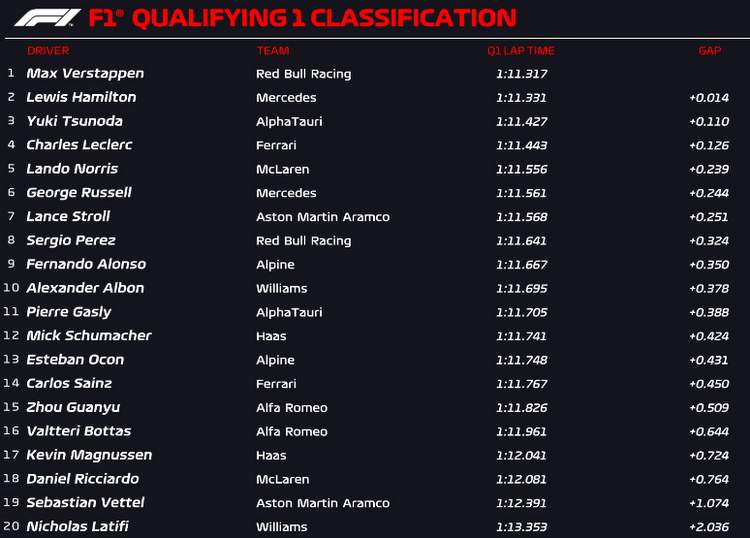