Zandvoort FP3: Leclerc fastest but watch out for Verstappen 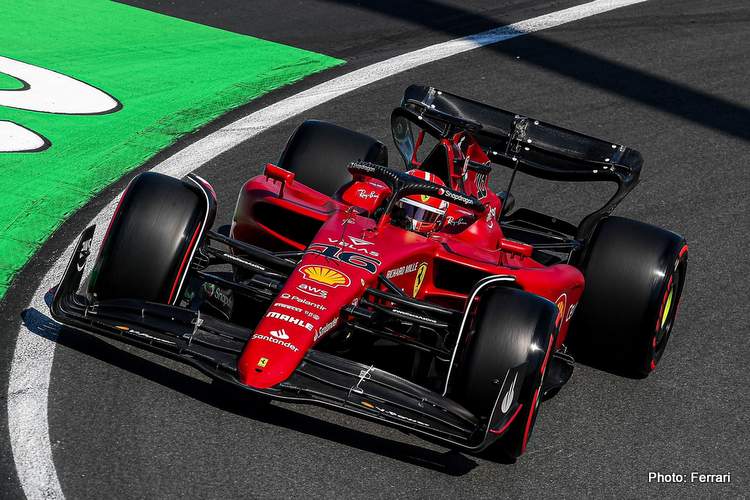 Charles Leclerc went fastest of all at the end of FP3 for the 2022 Dutch Grand Prix, but would be looking over his shoulder as Max Verstappen will be a threat in qualifying.

Verstappen started FP3 flying, as he was initially over half a second clear from Leclerc, prompting the latter to go for a full setup change, after which he went fastest.

Verstappen’s early times were done on used rubber but failed to put a lap together on a new set of Softs towards the end of qualifying, but there is some serious speed in the RB18 for qualifying.

Verstappen was third fastest behind George Russell in second, as the Briton seems intent to have a say in qualifying.

It seems to be another Ferrari/Red Bull fight in qualifying, with Mercedes hovering around to pick up the pieces should any of the top two drop the ball.

Three teams in the top three of FP3! 👀

As Friday showed, Red Bull do not seem to be enjoying the massive pace advantage they had at Spa last weekend, or they haven’t been able to switch their RB18 on at best, so FP3 should serve as a proper indicator on how Max Verstappen’s home weekend will unravel.

The time the reigning Formula 1 Champion lost in FP1 due to his gearbox troubles definitely did not help his cause, but if anyone can bounce back it should Verstappen and Red Bull.

Ferrari were as good as their words, and seemed to be going well around Zandvoort, fastest of all after FP2, but it remains to be seen of they can execute a clean race weekend, and maybe crash Verstappen’s homecoming.

Mercedes as well were on it, showing much better form than Belgium, as they were right behind the Ferraris, but should Verstappen make a comeback, the Silver Arrows will be relegated further back, as McLaren seem to have a spring in their step around the seaside track.

FP3 started in clear conditions as teams and drivers looked to do the final setup work on their cars ahead of qualifying on Saturday afternoon.

Sergio Perez was in a hurry, as he head out early on and registered the firs timed lap of the session, as Max Verstappen soon followed.

Lots of work for Red Bull to do after their missed running on Friday as well as their poor form, as Verstappen’s first effort was a 1:12.309, marginally faster than Charles Leclerc’s best time from FP2.

The Dutchman then went on to go faster, shaving a tenth off his first time. The Red Bull ace is looking good out of the box in FP3 as Leclerc’s first timed effort was over half a second off the pace.

No.1 is back in P1 ☝️@Max33Verstappen starts his Saturday off by topping the times by 0.6s in the early laps of FP3 ⏱️#DutchGP #F1 pic.twitter.com/hOJ3g7wyZ0

Lewis Hamilton got a taste of his own medicine, as he go slowed down by AlphaTauri’s Yuki Tsunoda at Turn 7, after he was all over the place on Friday with his malfunctioning radio.

Verstappen’s pace – on used Soft tyres – prompted a full setup change on Leclerc’s car, as the Monegasque head out on track and went to the top of the timing screens.

Ferrari and Red Bull giving us a taste of qualifying will be, as Mercedes seemed to be in a good place to cause some disturbance for the top two, as George Russell posted a time, 0.066s off Leclerc’s best, with 15 minutes to go.

The Aston Martins were showing a decent turn of speed in FP3, with both cars featuring in the top ten, but the challenge will be to carry that form into qualifying, as they used to show promise in FP3 only for the pace to evaporate later on.

Verstappen set out on new Soft tyres to try and improve his time, but had a scruffy lap that was good for third only, and could not improve after that.

Towards the end of practice, Pierre Gasly had a moment through Turn 9, running wide and smacking straight into a piece of polystyrene boarding.

Charles Leclerc clocked a 1:11.632 around Zandvoort, the fastest at the end of FP3, as Mercedes’ George Russell was extremely close in second, 0.066s off the Monegasque.

Max Verstappen who showed great speed at the start ended the session third fastest, 0.161s off Leclerc, but all indications show he has more pace in him come qualifying.

Carlos Sainz was third fastest in the other Ferrari, 0.339s off his teammate, as Lewis Hamilton couldn’t do better than fifth, 0.185s further behind the Spaniard.

Sergio Perez continued to struggle, and was sixth fastest, 0.544s off the ultimate pace, 0.383s off Verstappen’s time.

Fernando Alonso continued his decent form, seventh fastest in the Alpine, almost seven tenths slower than the best time, while his teammate Esteban Ocon was down in 14th on comparison.

Sebastian Vettel was eighth fastest with a 1:12.491 as the Aston Martin seemed to be in a good place, with no guarantees they can carry the form to qualifying.

Mick Schumacher put his Haas ninth fastest after a final push, 0.926s slower than the session’s best time, while Lando Norris was tenth, 0.033s further adrift from the German.

McLaren seemed to have gone back, as Daniel Ricciardo was down in 17th as well. 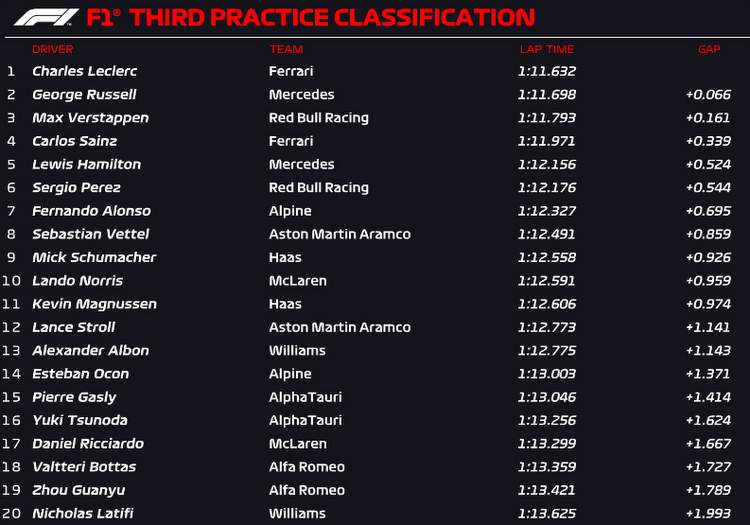