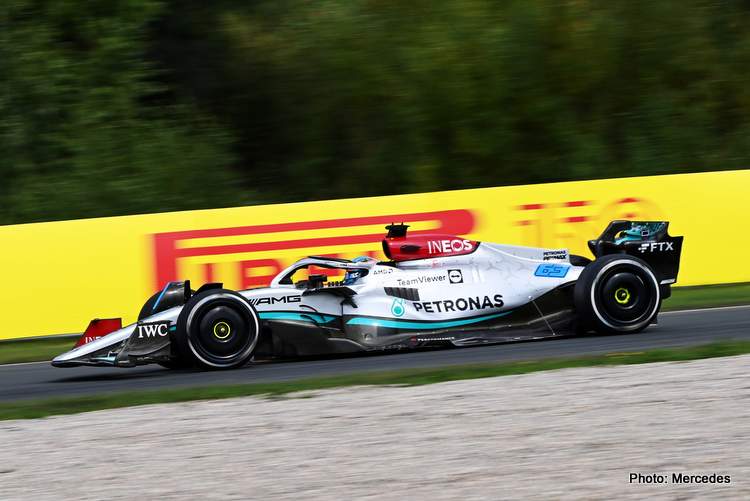 George Russell went fastest at the end of FP1 for the 2022 Dutch Grand Prix at Zandvoort, as home hero Max Verstappen’s car broke down due to gearbox troubles.

That’s not how Verstappen would have hoped to kick off his weekend at home, as he his car halted on track after just ten minutes of running with gearbox problems.

However it was George Russell that topped the times at the end of FP1, and to make things even better for Mercedes, Lewis Hamilton was second fastest in the sister Silver Arrow.

Birthday boy Carlos Sainz was third fastest in the Ferrari, as Verstappen was classified 19th fastest with the time he set on the Hard tyres before breaking down.

The home hero’s first practice comes to a swift end after he reported a gearbox issue 🛠️#DutchGP #F1 pic.twitter.com/WmB91Y87KL

Formula 1 is back at Zandvoort, the second race of the post summer break triple header, with home hero Max Verstappen entering the weekend with the echoes of his dominant display at Spa yet to die away.

The Dutchman was smart to downplay his chances this weekend, while overemphasizing Ferrari’s chances, but his statement should be taken with a pinch of salt as he is undeniably on a roll and feeling at one with his RB18.

Ferrari, on the other hand, are also feeling confident of their pace this weekend, but with them, matters are not as straight forward, as they are always able to pull a rabbit out of the hat when it comes to compromising their own chances, but let’s just hope this is not the case, just for the sake of the show since despite their withering chances of any Title success, it wouldn’t be a bad thing if they apply some pressure on Red Bull for the rest of the season.

Mercedes will also be in the spotlight so see how if they will be as bad this weekend as they were at Spa Francorchamps. They say they should fare better, but the can anyone really trust their moody W13?

Off track, the Silly Season has been developing quite interestingly over the past week, as we await a confirmation of Oscar Piastri’s future, Daniel Ricciardo’s landing, as well as Mick Schumacher’s future with Pierre Gasly joining the game of musical chairs.

Wondering what we’ve got for the #DutchGP this weekend? 🇳🇱 Welcome to the #Fit4F1 #PZero line-up for #Zandvoort 👇 pic.twitter.com/R6JT7g8dNw

Also worth noting this weekend are the trials conducted by the FIA who are planning to test a third DRS zone at the final corner at Zandvoort.

Also organizers at the Dutch Grand Prix are trialing a new type of ‘fake’ gravel trap, incorporated at Turn 12, where over a one-meter wide area along the kerb, resin-encased gravel has been laid out.

It may look like gravel, but is is solid, with the aim of avoiding gravel being dragged to the track by cars running wide.

FP1 started in clear conditions, with zero chances of rain, as the orange army was out in full force to support their local hero, who was honored by being appointed as an Officer in the Order of Orange-Nassau.

Christian Horner was keen to congratulate his driver at the start of the session, saying over the radio: “Hi Max, just wanted to say congratulations for your honour yesterday. Not sure what to call you, is it Sir Max or Super Max.”

Only for Verstappen to respond: “Just call me Max.”

Ten minutes into the session, Verstappen stopped on the side of the track at the entry to Turn 4, with smoke coming out of the back of his RB18, apparently with gearbox trouble, which caused the first Red Flag of the weekend.

“Something went with the gearbox,” the reigning F1 Champion reported. That’s not how you want to start your home race weekend.

Verstappen has stopped out on track

The session was restarted with 40 minutes remaining on the clock, as Lewis Hamilton lead the cars back out on track.

Soon after that, Mick Schumacher was announced under investigation as he was released from the pits under Red flags, but no action was take.

Several drivers were keen to try out the new ‘fake gravel’ as they went wide at Turn 12, Pierre Gasly, Mick Schumacher, and Daniel Ricciardo to name some.

Sergio Perez had a moment at Turn 9, as he ran wide, narrowly avoiding the wall.

Lewis Hamilton was the subject of several complaints from other drivers, as he has placed his car in positions compromising to to other drivers, but the Briton seemed to be struggling with his radio, as he reported to his race engineer that he has trouble hearing him.

Sebastian Vettel found himself in a similar situation as Hamilton, as he came into Lando Norris’ path, with the stewards noting the incident.

Carlos Sainz was third fastest in the Ferrari, 0.390s off Russell’s pace.

Lando Norris looked good in FP1, and ended the session fourth fastest, 0.474s off the top time, as Daniel Ricciardo was fifth, 0.148s slower the his teammate.

Charles Leclerc ended Zandvoort FP1 sixth fastest, 0.672s down from the benchmark time, followed by Sergio Perez in seventh, the Mexican almost one second away from Russell.

Fernando Alonso was eighth fastest in the Alpine, with a 1:13.633, and was followed by teammate Esteban Ocon in ninth, 0.330s further down the road.

Alex Albon rounded off the top ten over 1.5s too slow. 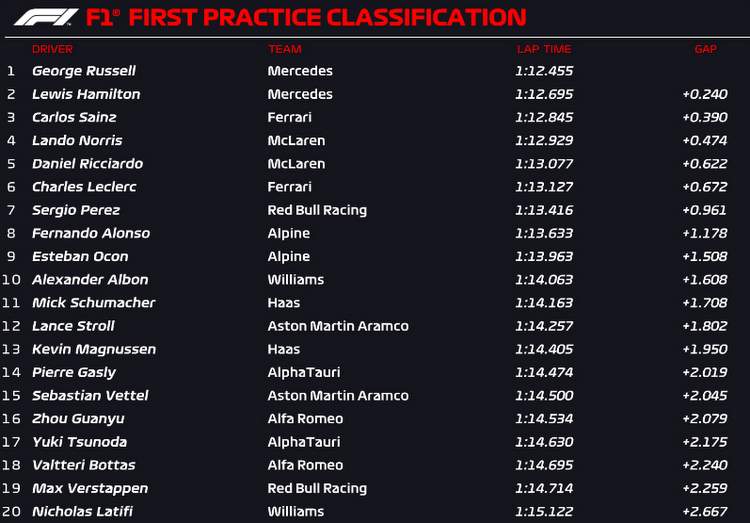