Zandvoort FP2: Leclerc from Sainz but it’s close at the top 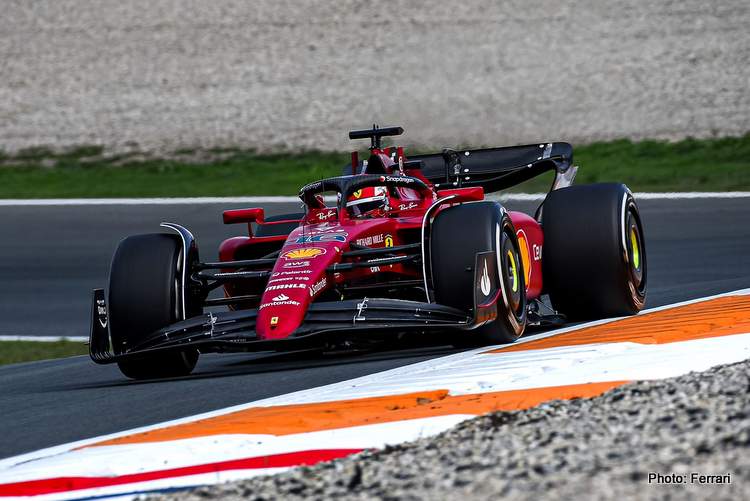 Charles Leclerc was the fastest driver at the end of a delayed FP2 for the 2022 Dutch Grand Prix, with Carlos Sainz a close second after a encouraging session for Ferrari.

The session started 15 minutes later than scheduled due to some delays caused by the qualifying Formula 2 session that was run before FP2.

In the end Ferrari showed some of the strong form they have been talking about all week, as Leclerc lead a close one-two for the Reds.

Lewis Hamilton continued Mercedes encouraging showing at Zandvoort to go third fastest behind the Ferraris, as the top three were within a 0.072s gap.

Red Bull were nowhere near the top as Max Verstappen was down in eight over six tenths off the pace, but provided the energy drinks outfit can sort their car for Saturday, the scene should be set for an interesting three-way fight for pole.

FP1 didn’t bring the ideal start of the 2022 Dutch Grand Prix weekend home hero Max Verstappen would’ve hoped for, as a gearbox issue meant his practice was over after just ten minutes of running.

Red Bull team boss Christian Horner insisted that what happened with Verstappen means they cannot take anything for granted.

“There’s still eight races to go, including a sprint race,” he told Sky Sports F1. “You saw in this first session that anything can happen so we’ve just got to keep our heads down, keep doing what we’ve been doing this year and the Championship tables will then take care of themselves.

“We’re just treating it one race at a time and the same approach for each event,” Horner insisted.

However, Mercedes seemed to enjoy the seaside track and were fastest with George Russell leading Lewis Hamilton in a one/two as Ferrari did not seem to get into the rhythm yet.

McLaren seemed to be in a good place, while the Alpines – their rivals for fourth in the Formula 1 Constructors’ Championship – were behind them but featured in the top ten.

Just ahead of FP2, the news also broke the Oscar Piastri will be driving for McLaren starting 2023.

We have signed 2021 F2 champion @OscarPiastri.

The start of FP2 was delayed for 15 minutes, due to some delays in the Formula 2 qualifying session, that was stalled due to several Red flags.

A couple of minutes into the session, Lewis Hamilton reported that his radio – that got him in trouble several times in FP1 – was not working again.

As a reminder, the Briton got in the way of several drivers during the first practice session as he couldn’t receive information from his team on the location of each car on track.

Pierre Gasly was confined to his team garage, as work was being done on his AlphaTauri, as over 20 minutes elapsed from the session. The Frenchman finally joined the action almost halfway through FP2.

At the start of the final thirty minutes of the session, drivers were out on track running qualifying simulations, with Ferrari looking good at the point, while Mercedes were certainly better than they were in Spa.

Red Bull on the other hand were back in the garage, as they didn’t seem to be plug and play so far, but nothing can be confirmed, as they usually turn things around from Friday to Saturday.

Daniel Ricciardo spent more time in the McLaren garage than on track, as TV footage showed a leak from his MCL36, a hydraulic issue for the Australian?

In the final twenty minutes, Verstappen emerged back on track for some race simulations on high fuel loads

Ten minutes from the end, Yuki Tsunoda beached his AlphaTauri in the gravel trap at Turn 10, bringing out the Red flags.

Tsunoda has beached his car in the gravel #DutchGP #F1 pic.twitter.com/YIWvV0vrum

On a final note, the long runs from the Ferrari showed some seriously strong race with Charles Leclerc as Red Bull seem to have work to do overnight ahead of FP3.

Drivers head to the start/finish line at the end of the session to have some practice starts.

Charles Leclerc went around the track at Zandvoort in a 1:12.345, a mere 0.004s faster than teammate Carlos Sainz who was second on the sister Ferrari.

Lewis Hamilton was 0.068s further down the road in third, as Mercedes seemed to be in a much better place around the seaside track compared to Spa week ago.

Lando Norris was fourth fastest in the McLaren, 0.103s off Leclerc’s time, while George Russell followed in fifth 0.207s behind his compatriot.

Lance Stroll was sixth for Aston Martin, 0.401s away from the top time, while Fernando Alonso was 0.102s adrift from the Canadian in seventh.

Local hero Max Verstappen could not go any higher than eighth, as Red Bull are yet to unlock the pace of their RB18. Verstappen was 0.697s off the ultimate pace.

Esteban Ocon made sure two Alpines features in the top ten, and was ninth fastest, 0.960s off the benchmark time, while Daniel Ricciardo was tenth fastest a little bit over one second too slow. 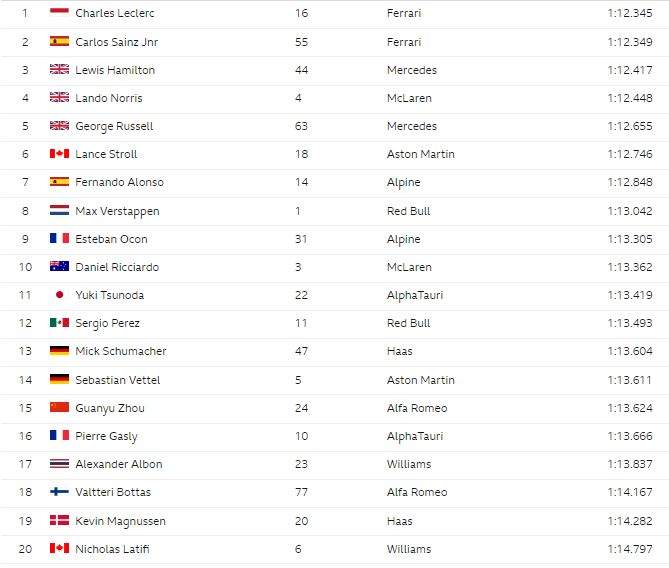