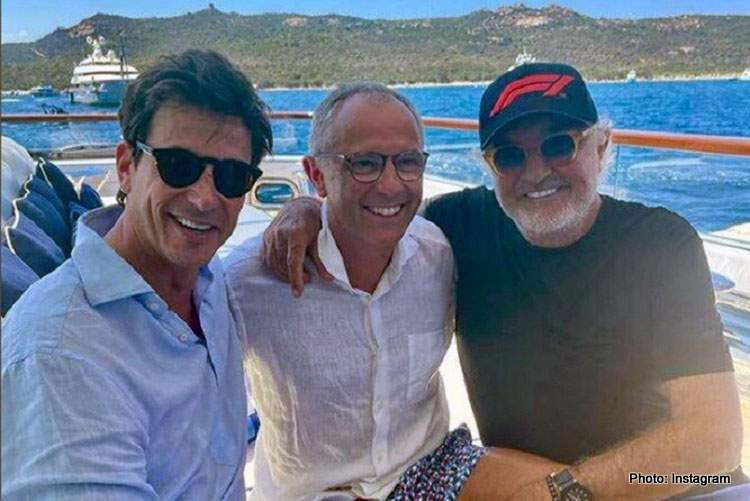 The trio popped up on Briatore’s Instagram feed post “On the boat with Stefano Domenicali and Toto Wolff.”

Briatore, once one of the most powerful men in F1, appears to be making a comeback in the wake of his role in the notorious Singapore Crashgat scandal, a scam seeing Nelson Piquet crash his Renault to favour Alonso’s bid for a win, Formula 1’s crime of the century.

But time has moved on, while Briatore has his business tentacles in the f1 mix, Baku was his doing and commissions are still allegedly paid, and there are even signs that the controversial Italian was involved with the Oscar Piastri poach by McLaren – if it indeed happens.

Remember Fernando Alonso and Mark Webber, key players in the Pisatri merry-go-around or tug-of-war were managed by Briatore at some point and the trio remain tight by all accounts.

So no surprise if you consider Flavio the guy who as Bennetton F1 boss wrenched Michael Schumacher from Eddie Jordan all those years ago. Whichever way you look at it he remains a powerbroker be it in the shadows or not.

And with these images surfacing with him costing with Toto and Stefano, the intent is clear albeit unknown as yet, the message is that F1-cap wearing and big smiling Flav, is back whether it is official or not remains to be seen.

Formula Passion report that Wolff traditionally spends his summer holidays in Sardinia and summer 2022 is no exception as the Austrian is again vacationing in Costa Smeralda.

Prompting the questions: What exactly is Flavio Briatore up to? What’s his endgame?