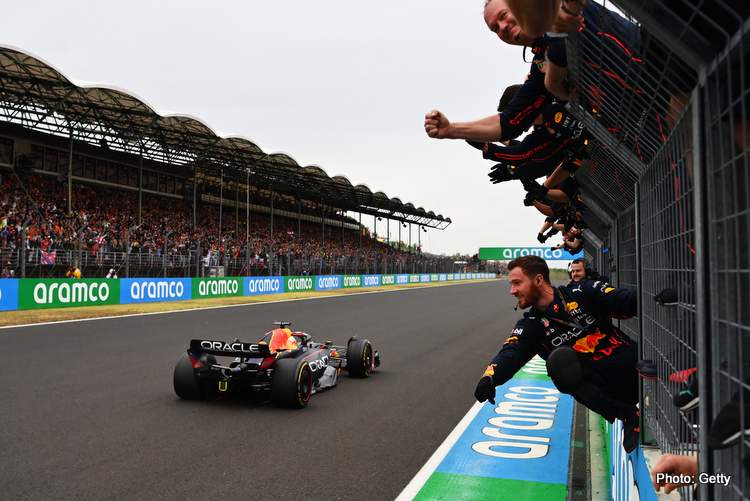 The 2022 Hungarian Grand Prix was far from the boring race we would have expected, as the weekend in Budapest delivered on and off the track providing us with the best sendoff into the Formula 1 summer break.

Things started to unravel in Hungary when four-time Formula 1 Champion Sebastian Vettel decided to join the social media community with an Instagram account, something he has resisted all through his illustrious career, which rightfully made us wonder what the reason behind this decision was.

Well it was a bigger decision, and that was his decision to retire from top flight at the end of this season, opting not to renew his contract with Aston Martin.

Vettel’s retirement started the silly season which had some repercussions; Fernando Alonso replacing Vettel at Aston Martin, and Alpine confirming Oscar Piastri who immediately snubbed them. Based on all this the summer break will be far from calm, especially as we await to see how the Piastri/Alpine fiasco develops.

As for racing, it wasn’t a bad race for a track that was dreaded for lack of overtaking, as we saw some decent moves thanks to the new generation of cars that allow for close following.

And then – I really can’t believe we have to go through this again – there was the Red horror show Ferrari put on once more, adamant to remain in the spotlight for the wrong reasons.

So let’s get on with some takeaways, our Takeaways from the 2022 Hungarian Grand Prix.

When cornered, blame the car 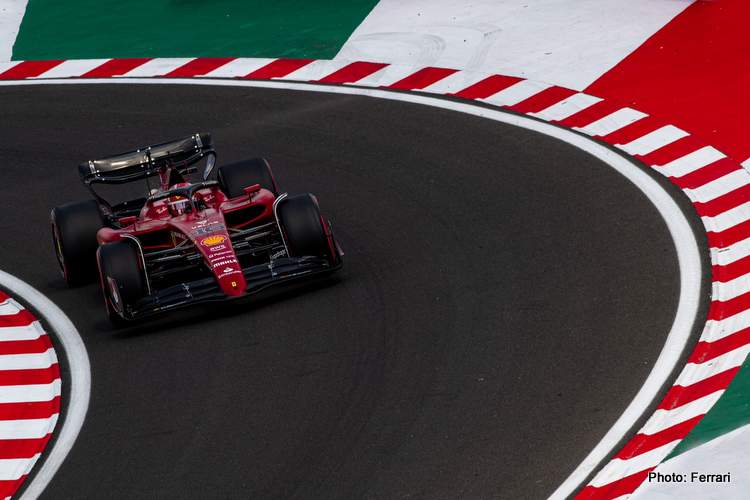 Right after Ferrari’s embarrassing race in Hungary, one that Mattia Binotto targeted to win with a one-two, the Ferrari boss was probably wondering how to spin the latest soap opera.

He then got the brilliant idea of blaming the best thing the team has now – aside from two strong drivers – and that is the F1-75, the car that secured 8 poles for the team in 13 races!

From discussions within our GrandPrix247 group, some figures that our data guru Kevin Melro came up with showed that the F1-75 was far from slow, in the hands of Charles Leclerc that is.

And while Binotto defended the strategy team saying Lewis Hamilton finished ahead of Carlos Sainz on the same strategy, the disaster everyone was talking about was the decision to put Leclerc on the Hard tyres, which left the Monegasque bewildered having made his feelings clear that he had decent pace.

I get it if Binotto wants to protect his team, something commendable in a team where the revolving door policy used to reign, but one has to be logical and not end up looking delusional.

There’s no hiding from the fact that Ferrari are massively lacking in the strategic department and something needs to be done there, and if Binotto cannot see that, someone who does needs to be brought in to clean the mess.

Binotto is too good an engineer to be shown the door, but as a team principal he is not doing what needs to be done; taking tough decisions for the good of the team.

This Championship is as good as gone for Ferrari, and even if they come back next year all improved and sorted, Red Bull and Mercedes will most probably be better.

If they can’t fight Red Bull alone this year, how will they fare with Mercedes thrown into the equation next year?

These are some dark days for the Scuderia, and the most important thing to do over the break is some contemplation and self-criticism to highlight the problems and take some tough decisions. 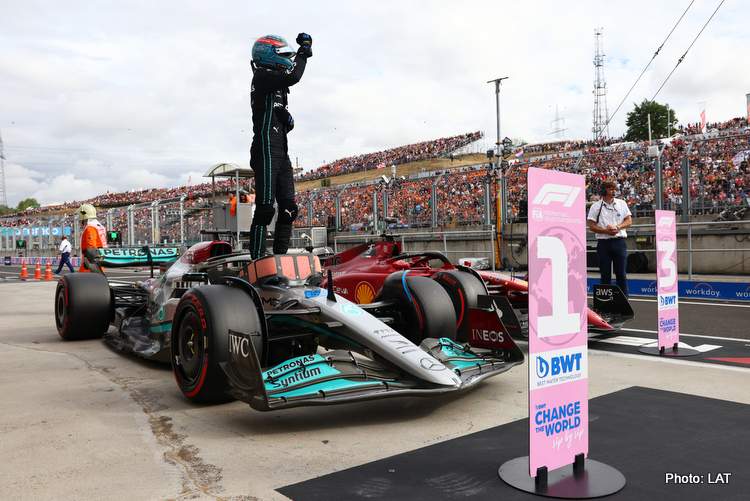 George Russell has been superb ever since he debuted for Mercedes this year, aside from his brain fade at the British Grand Prix taking out Zhou Guanyu in spectacular fashion.

In Hungary, the Briton ticked off another item on every grand prix driver’s list: Pole Position.

His lap itself may not have been spectacular as he did not register any purple sectors, but he kept his head down and drove calmly in tricky conditions to deliver Mercedes’ first pole this season, his personal maiden pole.

Both Ferrari drivers were scruffy in qualifying which eased matters for Russell to take pole, but that doesn’t take anything away from him. He extracted the maximum out of his car and thoroughly deserves the “polesitter” reference.

Lewis Hamilton wouldn’t have been happy about that, having been denied a proper shot at pole after a DRS malfunction on his W13 during Q3 of qualifying. It wasn’t guaranteed that he would have gone fastest but it would remain as a case of “what if” for the seven-time Champion.

Back to Russell, he drove a decent race, keeping his lead at the start under pressure from two Ferraris, but he didn’t seem to have the pace to keep up with the cars around him as the race developed.

He may not have converted his maiden pole into a maiden win, but the writing is already on the wall, Russell is destined for F1 greatness, sooner rather than later.

Patience George, that first win will come, and many after that. 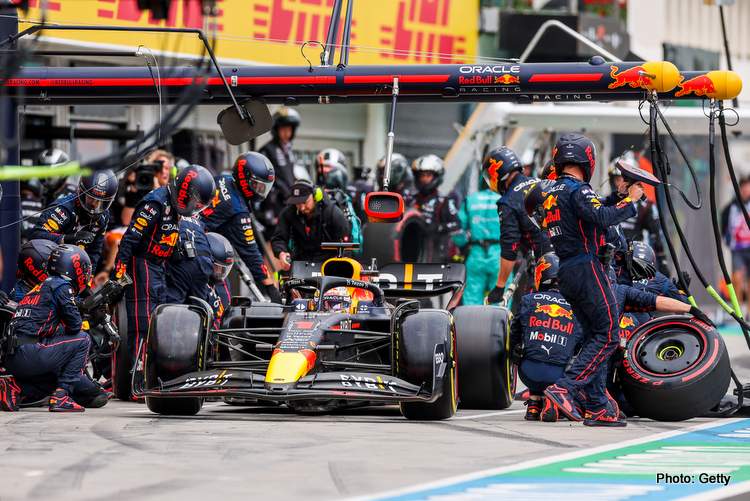 Max Verstappen said after Hungary that he didn’t expect the result he achieved, and I don’t think he was bluffing, as starting from tenth on the grid, a podium would have been the best result he could hope for, limiting the damage after his power unit issue in qualifying.

But Red Bull and their strategy team had other plans, and as the Dutchman said, they changed their previously planned strategy – planned around the Hard tyres – on the fly, and set out to execute it with perfection; well not much as the clutch problem Verstappen faced meant he had that 360 spin which he recovered from with some skill and went on to dominate the race.

Red Bull have always been supreme in their operations, and are never shy from thinking out of the box when it comes to strategies, and with Verstappen they have a driver who can deliver according to plan.

Ferrari may be doing their best to deliver the Title to Verstappen and the Bulls on a silver platter, but that does not take any credit away from them as they are rarely making mistakes.

Red Bull had a couple of reliability scares early on, and Verstappen may have had a couple of off weekends, but other than that they have been delivering consistently up to now, and there is no reason why this won’t continue after the summer break.

In our latest TeamTalk discussing the race in Hungary, I said that Red Bull and Verstappen are beginning a winning streak like the one the team enjoyed with Sebastian Vettel between 2010 and 2013, and this may well be the case.

Which brings me to Sebastian Vettel.

Danke Seb, you will be missed 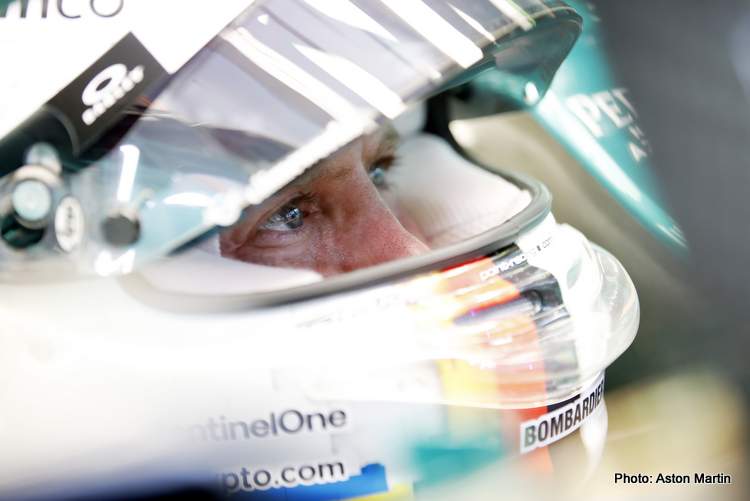 Sebastian Vettel announced his retirement from F1 on the eve of the race in Hungary, which to be honest was a decision we all saw coming, but despite that, it sent shockwaves throughout the sport’s community which is understandable given the German’s status.

It is somehow sad however to see him leave on such a low, and I would’ve preferred that he called it time at the end of his contract with Ferrari. The final couple of years with Ferrari have been tough as well but why spend two more years driving a back-marker with no hope for success even in the medium term.

However, he knows better, and it’s his decision to make, but my point comes from the fact that it hurts to see such a driver languishing in the wrong end of the grid.

His achievements speak for themselves, and the way in which he won his four Titles with Red Bull showed his talent and caliber, and while his years with Ferrari might be viewed as a complete failure, he shoulders part of the blame with some of the errors he committed, but the work environment he had to endure at Maranello was far from ideal with continuous management changes and in an era of utter Mercedes dominance.

Despite the glamour, Ferrari is not the best of employers. Just ask Fernando Alonso, and have a look at what Charles Leclerc is starting to experience now.

However, and at the risk of being wrong, I believe Vettel delivered one of his best F1 seasons with Ferrari in 2015, his debut season in Red, where he won three races and made it to the podium ten times in a car that, despite being much better than its 2014 predecessor, was nowhere near the pace of the formidable Silver Arrows.

In the end, a Championship in Red was not meant to be and now, we can only wish Vettel the best for the future but he will be missed as a Champion and a person.