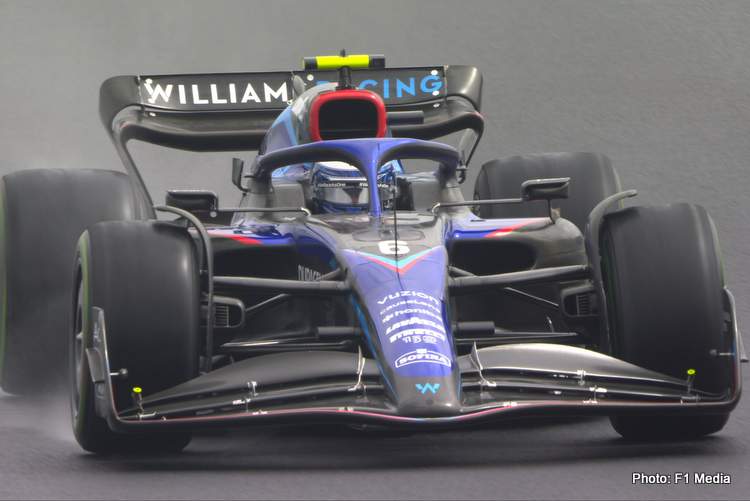 Nicholas Latifi was the fastest driver at the end of a rain-marred FP3 in Hungary, after keeping his hot lap till the final moments of the session.

Charles Leclerc who held the top position almost the whole session was second fastest for Ferrari, as Alex Albon was third in the other Williams.

Reigning Champion Max Verstappen, who only ran in the final 20 minutes of the session, preferring to wait for conditions to improve was fourth fastest.

Despite the result being meaningless, as the Canadian driver was the last to log in a lap time, when the track was at its best condition, that did not prevent Williams to relish the moment.

Formula 1 teams went through both Friday practice sessions with the Saturday’s weather in the back of there minds, especially for qualifying, and indeed it was raining cats and dogs when FP3 was due to begin.

Ferrari flexed its muscles on Friday, with Carlos Sainz fastest in FP1, Charles Leclerc taking over in FP2, while Red Bull did not seem to be in the zone.

Mercedes notably struggled as well, Lewis Hamilton admitting he was baffled with how his W13 transformed from France to Hungary, in just one week’s time.

McLaren seemed to have the upper hand in their fight with Alpine for fourth in the Constructors’ Championship, as Lando Norris was second fastest at the end of the second practice session.

The lights went green soon enough as the Ferrari pair Charles Leclerc and Carlos Sainz were the first to venture out on track, as they were joined soon by McLaren’s Lando Norris; all three on full Wet tyres.

Charles Leclerc is the first driver out on track 🙌#HungarianGP #F1 pic.twitter.com/33zEMNraVY

Fernando Alonso joined later but the Spaniard has the Intermediate tyres bolted to his Alpine, after which Leclerc radioed his team saying Intermediates should be the tyres of choice, as there is not “much aquaplaning”.

Sainz on the other hand does not agree with his teammate saying to his team he was not sure “it’s worth the risk” to have the inters.

There were some doubts regarding Lewis Hamilton’s car, as the team had the “Do Not Enter” signs, but as it turned out, the #44 Mercedes was undergoing mandatory FIA checks, with work being done with a laser scanner related to checks on the car’s floor.

With 15 minutes gone from the session, the rain intensified, making the Wet tyres the best suitable option, as Ferrari informed Leclerc that rain will be intense until the 45th minute of the session, as it will ease off in the final 15 minutes.

Lewis Hamilton finally set out to the track halfway through the session, Wet tyres bolted to his W13, as conditions were getting trickier.

Mick Schumacher reported “a lot of standing water”, while Alex Albon revealed there is aquaplaning going into Turn 10 and on the main straight.

After 35 minutes of running, the Williams team informed Nicholas Latifi that there was no more rain expected, and moments later, Pierre Gasly brought out a brief Yellow flags performing a 360 spin at Turn 7.

No damage was done, and the Frenchman was soon back on his way.

The Red Bull drivers took their time before heading out on track, the first one being Sergio Perez who took to the track as the rain eased off, after 40 minutes were gone from the session, as Max Verstappen followed a couple of minutes later, the Dutchman running on Intermediate tyres.

The drivers starting venturing to the track with the Intermediate tyre, but Hamilton soon reported “no grip” on them, a sentiment his teammate George Russell relayed earlier before switching to the Wet tyres.

Mercedes later advised Hamilton, who was back in the pits that they are struggling to generate temperature on the rear axle.

Both Mercedes drivers are struggling for grip out there

Charles Leclerc had a 360-spin as well as he went out on the Intermediate tyres, as that compound proved to be a bit tricky in terms of generating temperatures.

Leclerc has a moment coming out of Turn 3 😮

He nails a perfect 360° and then nonchalantly goes on his way! #HungarianGP #F1 pic.twitter.com/wGo1MmAMAk

Fernando Alonso however was insisting on make the green-banded tyres work as he struggled to get his A522 around the Hungaroring.

Fernando wrestling with his car

The Spaniard is pushing all he can and is currently P6 #HungarianGP #F1 pic.twitter.com/oeCFFllOfy

With nine minutes remaining, Aston Martin’s Sebastian Vettel brought out the Red Flags as he spun his AMR22 into the barriers at Turn 10. Luckily the Green Car doesn’t seem to have sustained any damage.

Seb has spun off into the barriers at Turn 10 – he’s ok, just bruised pride#HungarianGP #F1 pic.twitter.com/nxBBJs5B06

Vettel was third fastest at the moment of his session-ending spin, and his car was cleared from the track, and the proceedings were given the green light with almost three minutes remaining.

Nicholas Latifi got his 15 minutes of fame as he clocked a 1:41.480 at the end of FP3 putting him top of the timing screens.

Charles Leclerc was second, 0.661s off the Canadian’s time, as Alex Albon took third a further 0.240s down the road.

Max Verstappen was fourth fastest for Red Bull 1.725s off the pace, ahead of Mercedes George Russell in fifth, the Briton notably struggling to put heat into his tyres all session long.

Fernando Alonso was sixth fastest in the Alpine with a 1:43.570, ahead of Carlos Sainz in seventh 0.019s behind his compatriot.

Lando Norris was eighth fastest for McLaren 2.263s down from the best time, with Sebastian Vettel ninth fastest in the Aston Martin.

Vettel binned his AMR22 less than ten minutes away from the end of FP3, as Kevin Magnussen rounded off the top ten in his upgraded Haas.

Nothing should be read into these times and gaps as the track was rapidly evolving towards the end. 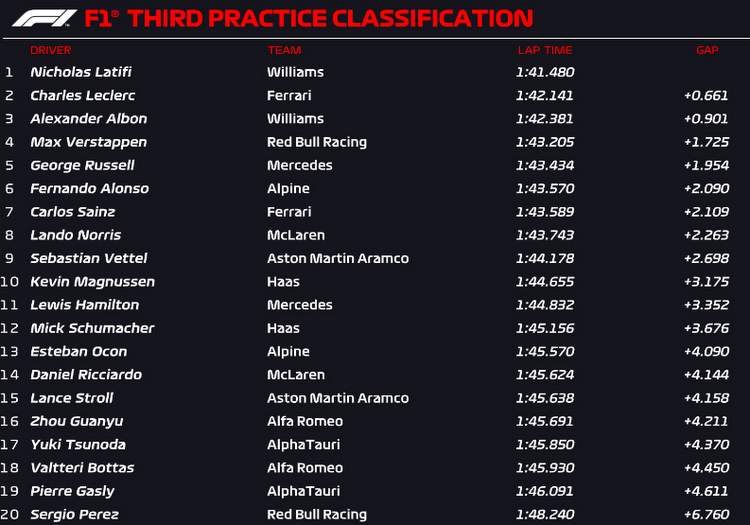