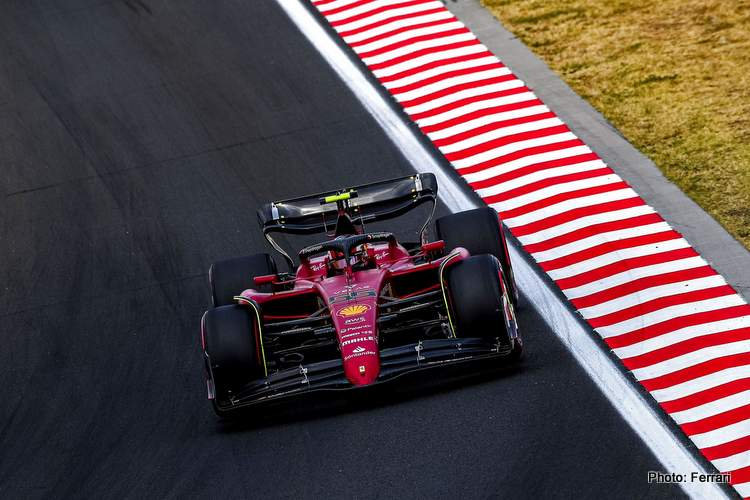 Carlos Sainz went fastest of all at the end of FP1 for the 2022 Hungarian Grand Prix ahead of Max Verstappen and teammate Charles Leclerc.

The Spaniard was over one tenth faster than the reigning World Champion, as Charles Leclerc was over two tenths down in third.

Lando Norris took fourth in the McLaren ahead of George Russell, fifth for Mercedes.

Crossing #FP1 off the list. P1 and P3 for Carlos and Charles 👊#essereFerrari 🔴 #HungarianGP pic.twitter.com/JgmgYefcf5

Formula 1 heads to Hungary this weekend for the final race before the sport, its teams and drivers head on to a deserved summer break before action resumes in Spa for the Belgian Grand Prix on August 26.

The news for this weekend should’ve been all around how Ferrari and Charles Leclerc bounce back from their miserable French Grand Prix one week ago, after the Monegasque crashed out of the lead due to – on his own admittance – a driver error.

But Sebastian Vettel had his own plans, those of retirement, as the German announced on Thursday that he will be leaving F1 at the end of this season, opting not to renew his contract with Aston Martin despite the team’s wish to do so.

Vettel’s announcement was not a shocker as most of us saw it coming, but maybe the timing took everyone by surprise, and stole the limelight from Ferrari and Red Bull battle that will commence this weekend in Budapest, as both would be aiming to wing this round to enter the summer vacation on a high.

Mattia Binotto boldly claimed that his team will be gunning for a one-two at the Hungarian Grand Prix which is not so outlandish – provided Ferrari don’t find a new way to mess up – as their F1-75 should be formidable around the Hungaroring.

With Leclerc now 63 points behind Max Verstappen, it is crucial that he and Ferrari act now or else the reigning World Champion will be cruising towards his second F1 Title this year.

In that regard, Martin Brundle said on Sky Sports F1: “If you look at the engine usage, the power unit usage of the Ferraris, they have used a lot more than the Mercedes or the Red Bull.

“They are fragile and the drivers are making mistake from time to time. It is not the same driver coming in the top position for them every weekend.

“If they are going to still win this World Championship they need to start here on Sunday,” he warned.

Mercedes’ form will be under focus this weekend as well after their double podium in France, as it will also be interesting how McLaren fare on their second race with their upgraded MCL36.

Speaking of upgrades, Haas’ long awaited upgrade will finally be revealed this weekend, with the most apparent change being new Ferrari-esque sidepods.

Haas also had a new diffuser, and upgrades to the floor, rear suspension and the brakes, as they spent the first half their season optimizing and understanding their debut package instead of rushing upgrades.

Aston Martin are also debuting a new rear wing, which the team is counting on to change the course of their season going forward.

Aston Martin’s new endplate extension, beats the rules that were aimed to reduce the rear wing’s effectiveness. Interpreting the radius rules & finding a loophole to create a fence that maintains high pressure above the wing for more downforce#F1 #TechTalk #HungarianGP pic.twitter.com/fMrCl8cqRJ

Polish driver Robert Kubica will be replacing Valtteri Bottas behind the wheel of the Alfa Romeo for the first free practice session.

Fernando Alonso celebrates his 41st birthday today in Hungary, as the Spaniard continues to show that age is only a number, his performance since his comeback with Alpine proving that he deserves a place in F1.

Halfway through the session, Mercedes’ George Russell reported over the team radio that he was experiencing “bottoming” with his W13 going into Turn 1, but went on the score the second-fastest laptime at that point of the session.

On the other hand, and in the Red Bull cockpit, Sergio Perez was sneezing quite a bit reporting: “A bit of an allergy around this place.”

Have you ever sneezed while driving? 🤧😅

The session saw various drivers having some moments here and there running on kerbs but in general it was undramatic with no stoppages or Red/Yellow flags.

Carlos Sainz clocked a 1:18.750 on his way to the top of the timing screens at the end of FP1 in Hungary, as Max Verstappen was 0.130s off the pace in second.

Charles Leclerc was 0.289s in third, as Lando Norris went fourth fastest but over half a second off the top time.

George Russell was fifth fastest in the Mercedes, 0.307s slower than Norris, while Sergio Perez could only go as high as sixth, 0.016s further adrift from Russell.

Perez might have been able to get a faster time, but encountered traffic twice on his final hot laps.

Lewis Hamilton didn’t look happy in his Mercedes, and had several off moments, and was seventh fastest as a result and 0.960s off the benchmark.

Daniel Ricciardo was eighth fastest in the other McLaren, just over one second from the top time, while Esteban Ocon was ninth a further half a second down the road.

Fernando Alonso rounded off the top ten in the sister Alpine 0.029s slower than his teammate, while the heavily updated Haas of Kevin Magnussen and Mick Schumacher – running the original spec – were 17th and 18th respectively. 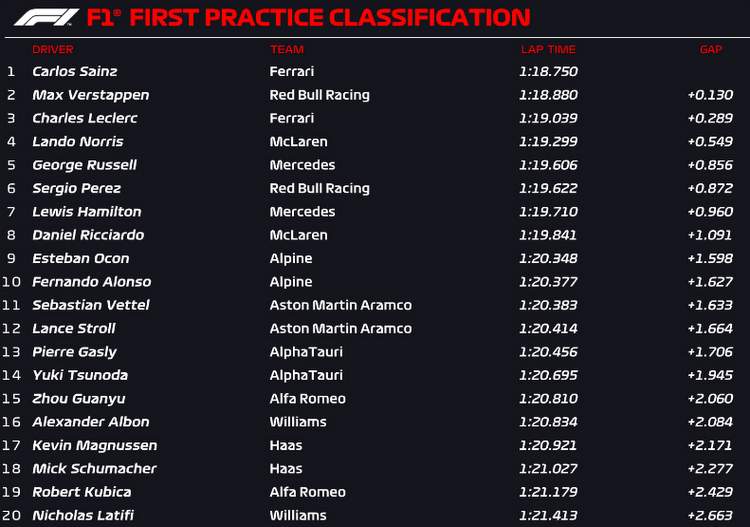