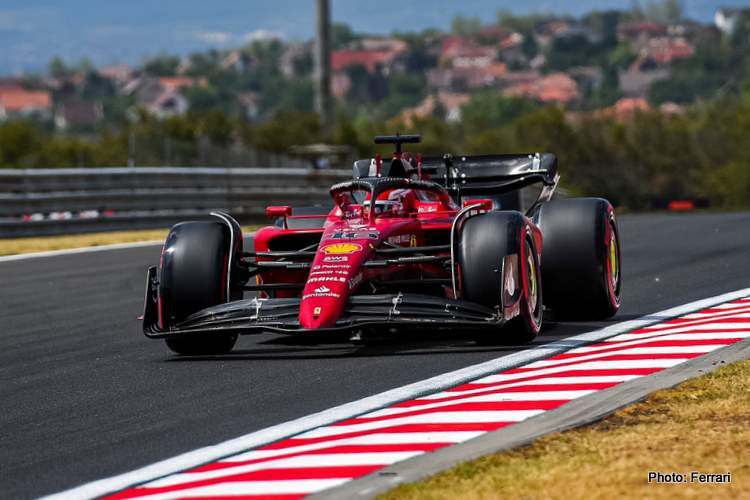 Charles Leclerc found some extra pace to go fastest at the end of FP2 for the 2022 Hungarian Grand Prix, as Lando Norris was a surprise second best.

Norris delivered a mega lap on Soft tyres during the session which out him a little over two tenths behind session leader Leclerc.

Carlos Sainz was third in the sister Ferrari, ahead of 2021 Formula 1 Champion Max Verstappen who was fourth, as the both Ferrari drivers also showed some handy pace over the long run as well regardless of the tyre compound bolted to the F1-75, averaging almost half a second faster than Mex Verstappen’s race simulations.

It seems to becoming a habit for Red Bull to be slow on Friday only to find some pace overnight, and show some improvement on Saturday, but will they be able to overhaul Ferrari on a track where the F1-75 will be expected to be in its element.

Carlos Sainz was the fastest driver on track at the end of FP1, over a tenth faster than Max Verstappen, which confirms Red Bull’s fears of Ferrari superiority at the Hungaroring.

What makes things even worse is that Charles Leclerc hasn’t turned it on yet, as he is usually the faster Ferrari driver, which means the ultimate gap between the rival teams might be actually bigger in favor of the Reds.

Haas who have brought a heavily upgraded car this weekend, but ended the first practice session 17th and 18th, Kevin Magnussen – running the upgraded car – being faster than Mick Schumacher, but that could be down to the team getting to learn their new package.

As a side note, Pirelli have the C2 (Hard), C3 (Medium), and C4 (Soft) compounds available to the teams this weekend,

We’ve arrived in Budapest and so have the tyre compounds! These are the boots in action this weekend for the #HungarianGP 🥾 #F1 #Fit4F1 #Formula1 #Pirelli #Pirelli150 @F1 pic.twitter.com/xzElSI8cSl

Most drivers started the session on the Medium compound setting their initial lap times excpet for the Williams team who sent their drivers out on the Softs. McLaren started on the Hards as well as Esteban Ocon from Alpine as Fernando Alonso belonged to the Medium group.

Ten minutes into the session, Lewis Hamilton had some sobering news delivered by the team, as he was informed that his initial effort was 1.9s off Charles Leclerc’s on the same tyre compound.

Twenty minutes in the session, Williams’ Alex Albon brought out the Yellow flags as he spun around entering into Turn 1, after a rear lock ruining a fine brand new set of Softs, but no damage to the car.

Almost halfway through the session, the Soft tyres started to make their appearance on track as some teams began with their qualifying simulations.

Many cars where given a proper beating over the kerbs of the Hungaroring, as the drivers looked to explore the limits, but Lando Norris has a spectacular excursion.

Lando does a disappearing trick after running wide and kicking up dirt 😮#HungarianGP #F1 pic.twitter.com/d7KN9NDLu2

Norris later received a message from his team to be “mindful of the kerbs” to protect the car’s floor.

George Russell expressed his frustration with his W13 asking to his team: “What the hell is going on at Turn 1?”

“Just cannot get round that corner without locking,” he revealed.

It is not a good session for Mercedes, as halfway through the session, the fastest of the Silver Arrows was Lewis Hamilton, eighth, 1.102s off the leader, Charles Leclerc.

Towards the final 20 minutes of the session, the teams started shifting their focus towards long runs on heavy fuel loads.

Max Verstappen seemed to be having some vibrations with his RB18, as he reported: “These oscillations in Turn 4 and 11 are a joke.

Earlier, Charles Leclerc seemed to have a problem, as he radioed his team saying: “There’s something wrong in fourth gear.

“It feels like the torque is very, very low in this mode. It’s the first time I’ve ever had this, so let’s maybe check?” he added.

After that he was briefly called into the pits, but was soon back on his way to the track.

Hamilton had a moment at Turn 4 close the end of the session, reporting an unstable car, as Leclerc had a similar off moments later.

📻 “Car’s unstable” he tells the team before returning to the pits #HungarianGP #F1 pic.twitter.com/ga9LrTsDOK

Charles Leclerc’s best efforts produced a 1:18.445, 0.217s clear of Lando Norris in an excellent second for McLaren after a great hot lap on Soft tyres.

Carlos Sainz was third fastest in the sister Ferrari, 0.014s off Norris’s time, and 0.052s ahead of Max Verstappen, fourth for Red Bull.

Daniel Ricciardo was up there in the top five, 0.427s off the pace, confirming McLaren early advantage over Alpine in Hungary.

Fernando Alonso was sixth fastest for Alpine, 0.177s behind Ricciardo, but Esteban Ocon was down in 13th in the sister Blue and Pink car.

Sebastian Vettel seems to be relaxed after announcing his retirement, and put Aston Martin’s new rear wing into good use to go seventh fastest, 0.808s off the ultimate pace, as Lance Stroll was down in 14th.

Mercedes had a tough session, both drivers complaining about their W13’s, with George Russell being the faster of the pair, eighth fastest a tenth behind Vettel, as Lewis Hamilton could not make it into the top ten, only 11th fastest.

Sergio Perez was way off his teammate’s pace, ninth in the RB18, 0.952s off Leclerc’s session topping time, as Valtteri Bottas took tenth in the Alfa Romeo.

Haas didn’t seem to be able to make their updated VF22 click yet, as Kevin Magnussen was 16th while Mick Schumacher was 17th, in the old-spec car.

Ferrari seems to be having the edge over Red Bull both in terms of qualifying pace and race pace. 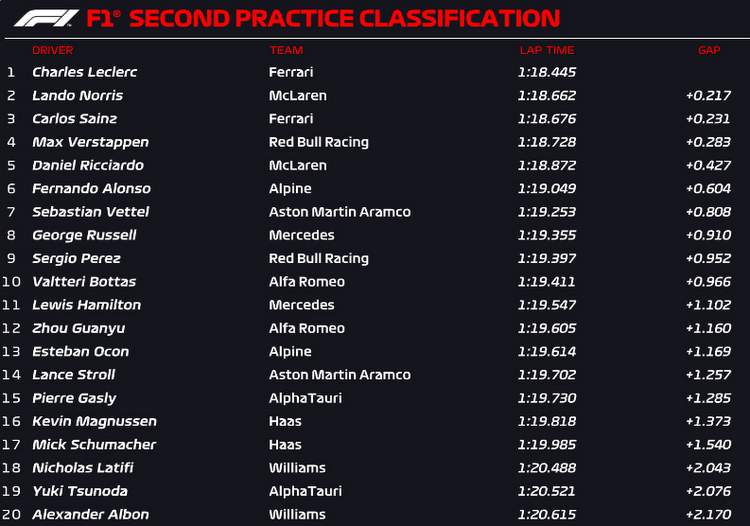