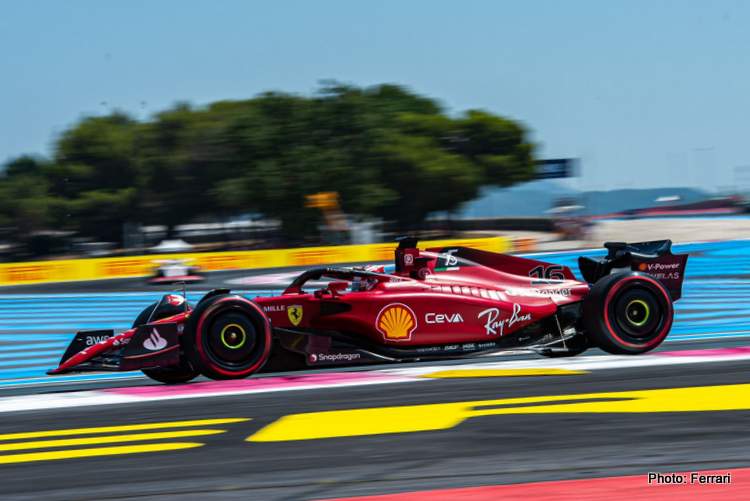 The Reds used Carlos Sainz in the final stage of qualifying to provide Leclerc with a tow in the second sector, as it was the team’s plan to get him into Q3 despite his grid penalty for that purpose, to try and neutralize Red Bull’s power advantage in that particular sector.

In the end, the Red-Plan worked out quite nicely, as Leclerc took pole by 0.304s from his Dutch rival who had to settle for second despite showing great promise from FP3 a few hours before qualifying, where Ferrari seemed to be lacking pace.

Leclerc who credited his teammate for his support with tow on his cool down lap in Q3 said after qualifying: “It’s a great lap. I’ve struggled all weekend to put a lap together and I managed to do it.

“But I have to say that I also had the help of Carlos and that was amazing teamwork, because without Carlos it would have been much closer, so a huge thanks to Carlos and I hope that he can join us back in the fight for the win tomorrow,” he added.

Max Verstappen commented on his qualifying after earlier topping practice, he said: “Well, FP3 is not qualifying clearly. Overall, I think we were lacking a bit in qualifying, just general grip. It was a bit trickier than I think I would have hoped but overall we still have a decent race car.

“Hopefully tomorrow will come into our favour, we’re quick on the straights so we can use that tomorrow. Clearly they’ve been really quick again,” the reigning Formula 1 Champion concluded.

Sergio Perez struggled all weekend for pace but found the sweetspot when it mattered and will start Sunday’s race from third. He said: “It’s been a good recovery.

“I’ve been nowhere the whole weekend to be honest. I’ve been struggling a lot and it’s probably been my worst weekend up until qualifying. Finally we managed to recover well in qualy,” he added.

Charles Leclerc pole lap was a mega 1:30.872 benefiting from the tow Carlos Sainz gave him, while Max Verstappen could only muster a 1:31.176, three tenths slower.

Sergio Perez was this fastest, 0.159s off the pace of his teammate, as 0.430s behind, Lewis Hamilton took fourth fastest for Mercedes.

Lando Norris was an excellent fifth in the upgraded McLaren, but he was 1.160s off pole, while his compatriot George Russell was 0.099s behind him in sixth.

Fernando Alonso took seventh for Alpine with a 1:32.552 ahead of Yuki Tsunoda who was eighth fastest, over two tenths slower than the Spaniard.

Carlos Sainz did not set a time in Q3 and was classified ninth from his Q2 time, as Kevin Magnussen was tenth, also opting not to run in the top ten shootout.

Both will have to serve their grid penalties at the start of tomorrow’s race for using new power units, more than their allowed allocation stipulated in the regulations. 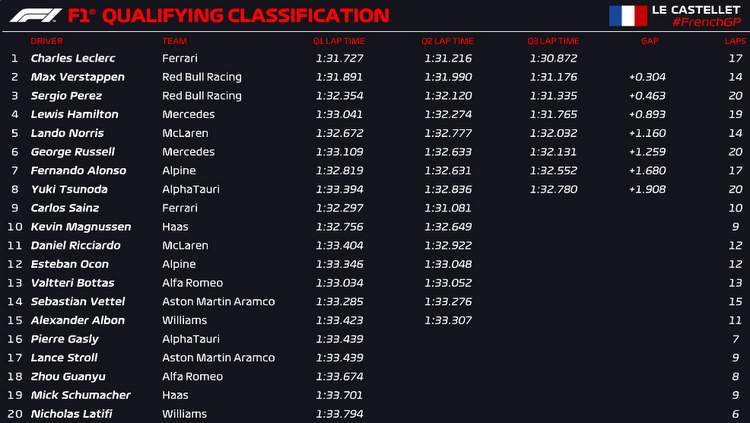 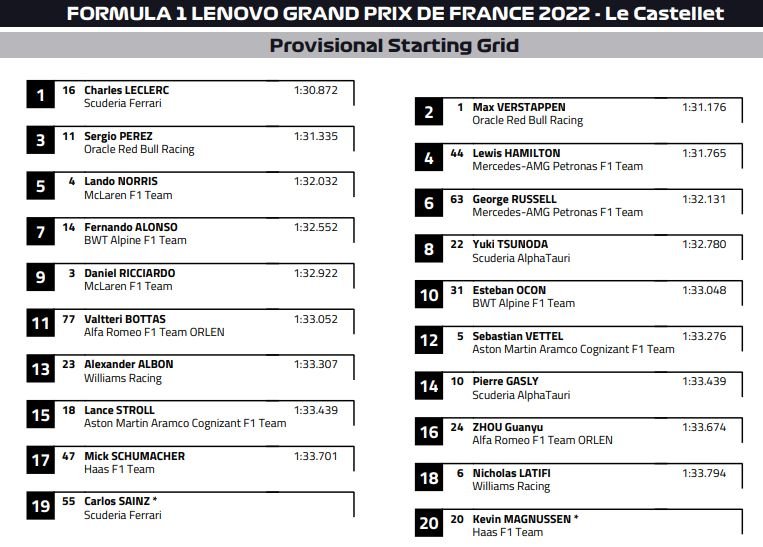 However, after all 15 drivers ran their second flying laps, Sainz’s time remained unchallenged as he topped Q2, with Charles Leclerc behind him in second, while Max Verstappen was third, 0.909s off the top time!

Thanks to Magnussen’s single lap that put him eighth fastest in Q2, Daniel Ricciardo was the first driver to lose out on a Q3 appearance missing the cut by 0.086s.

Behind him, Esteban Ocon failed to make it to Q3, and was 12th fastest, 0.126s behind the Australian, with Valtteri Bottas in 13th.

Sebastian Vettel could not advance any further in the Aston Martin with his 1:33.276 being only good for 14th, ahead of Williams’ Alex Alsbon in 15th by 0.031s. 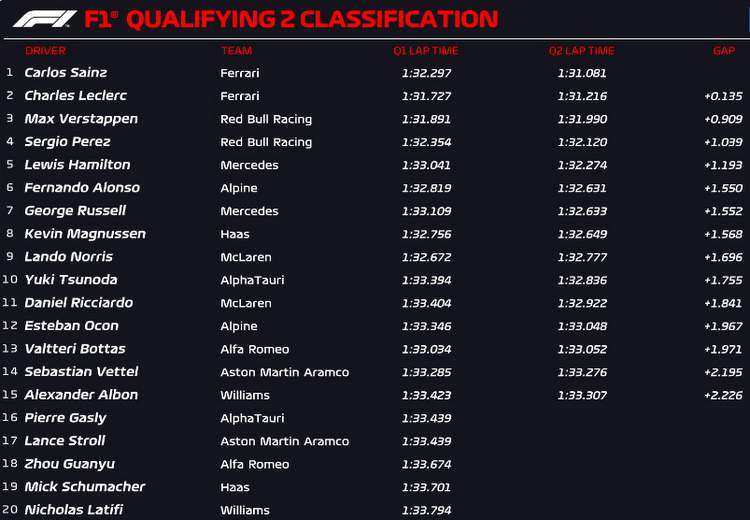 Qualifying started under hot, sunny conditions, with ambient temperatures around 30 degrees, while the track temperature was a scorching 50.

Q1 was straight forward except for Carlos Sainz and Kevin Magnussen who will both start from the back of the grid for taking new power units, more than their allowed allocation, both of them running one lap.

As for those who did not make it into Q2, Pierre Gasly was the first to lose out, as he was 16th fastest, and missing the cut by a painful 0.016s.

A big disappointment for the Frenchman at his home race, especially that he was running an updated AT03.

Lance Stroll was next in 17th for Aston Martin, with an identical time as Gasly, but was classified behind the Frenchman as he set his lap time after him.

Alfa Romeo’s Zhou Guanyu was 18th fastest, the Chinese rookie not helping his quest to reach Q2 after an error on his final flying lap.

Mick Schumacher was 19th fastest, after his flying lap, good for tenth initially, was deleted for track limits violation, while Nicholas Latifi was dead last in the Williams.

Worth noting that Magnussen set the sixth fastest time in Q1, but will be relegated to the end of the grid on Sunday’s race along with Sainz, who start ahead of him. 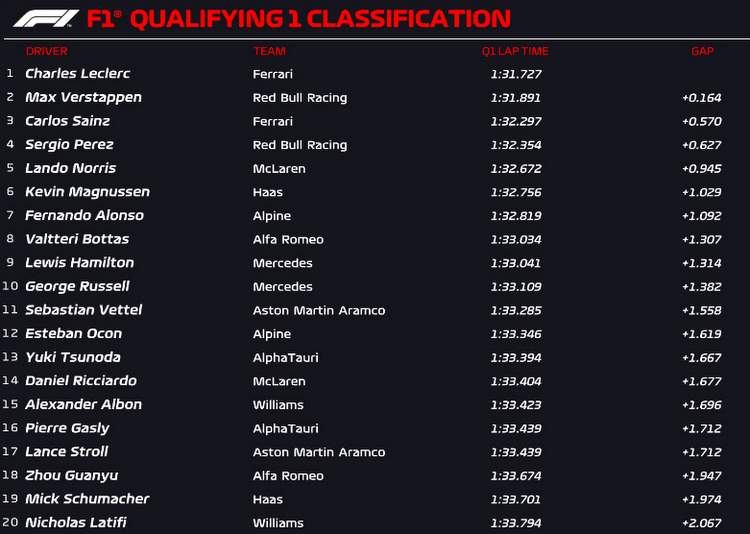