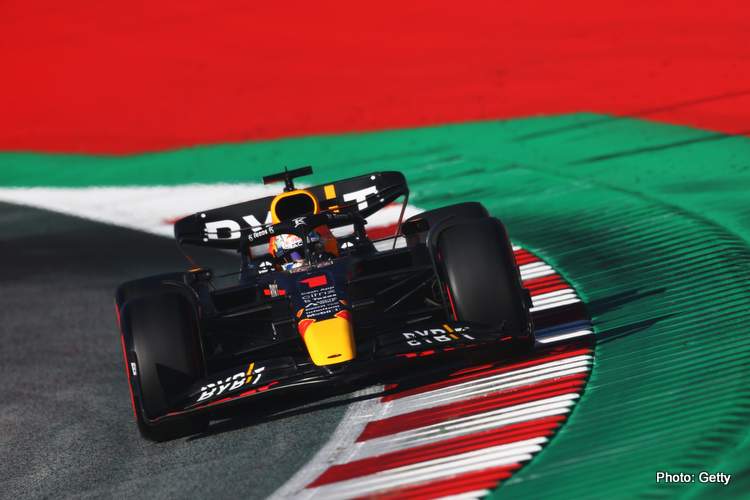 Max Verstappen won the second Sprint Race of the 2022 Formula 1 season in Austria, ahead of Charles Leclerc and Carlos Sainz, neither able to challenge the Dutchman.

Charles Leclerc fended off the attack of Carlos Sainz to take second behind his Title rival, the Spaniard settling for third, after he destroyed his own tyres trying to overtake the Monegasque.

Verstappen showed advantage on the long runs during FP2 earlier, which was proven by him speeding away during the Sprint Race, but Leclerc reported on the team radio at the end that he can “get them” during Sunday’s race, as he was confident of his speed.

It was true, as Leclerc was running faster than Verstappen towards the end of the Sprint, but it remains to be seen whether that is true, or the Red Bull driver was just managing the pace towards the end.

In the end Verstappen took the chequered flag 1.675s ahead of Leclerc, as Sainz was a approximately four seconds further down the road having ruined his tyres chasing his teammate.

Verstappen: It was a decent race 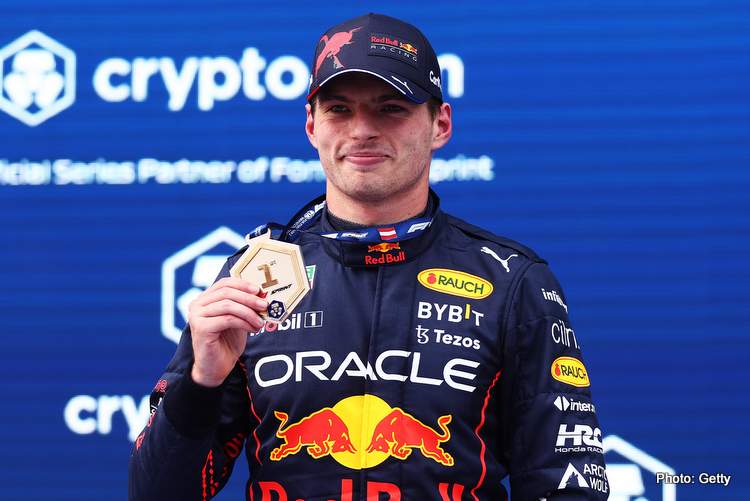 Verstappen said after the race: “It was a decent race. We had good start in the beginning and after that we were very closely matched. It was good, it was like a sprint should go, quite flat out.

“In the first few laps [the Ferraris] were also fighting a little bit, so I had a bit of a gap. After that I think we were quite similar in pace. I think tomorrow it’s going to be a quite interesting battle again. The race is going to be a lot longer and tricky on tyres.

“The car is good. There’s a few things to fine tune but overall we have been really competitive again this weekend,” the Red Bull ace concluded.

Charles Leclerc added: “It was tricky. Obviously the first part was all about managing but Max was very quick and was pushing quite a lot at the beginning. I was just trying to control my tyres to attack at the end.

“I had a small fight with Carlos and towards the end I started to push. I was gaining a little bit, but it was very close overall.

“Tomorrow is the race and hopefully we can have as good a start as today and put a bit more pressure on Max,” the Ferrari driver conlcuded.

Third placed Sainz reflected on his Sprint saying: “I had a good start and then a couple of fights with Max into Turn Three and then Charles into Turn Three again later in the race. It was good fun, like it should be, good racing.

“I probably overheated the tyres a little bit running behind Charles and I had to back off to recover them and finish the race,” he added.

“We need to improve the pace because Max looked very strong at the beginning. Then little by little it looked like we were starting to match him.

“Tomorrow is a longer race and anything can happen. The important thing is we are both in the fight and we will try our best to beat Max,” Sainz concluded.

Behind top three, George Russell finished fourth for Mercedes, a massive 13 second down from the leader, while an excellent starting Sergio Perez finished fifth having started from 13th.

Esteban Ocon, the only Alpine remaining in the race, finished sixth, as Kevin Magnussen took seventh for Haas.

The final points’ scorer of the Sprint was Lewis Hamilton, who recovered from his early contact with Pierr Gasly to finish eighth, after an epic fight with Mick Schumacher, who showed some decent defensive skills.

Out of the points 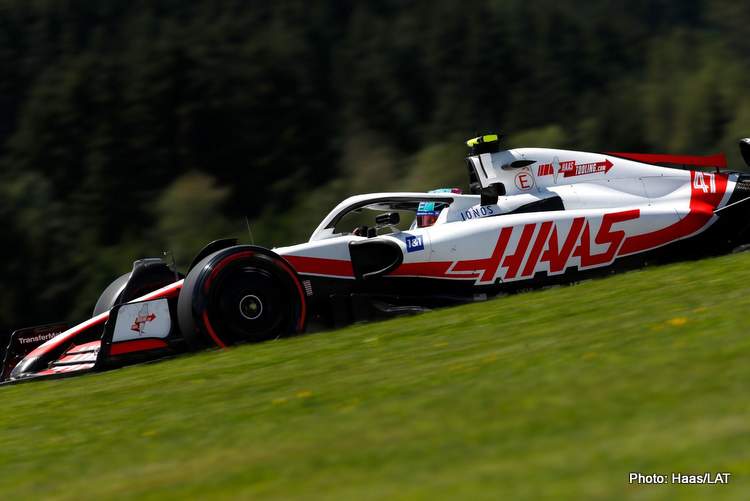 However, Schumacher’s impressive driving did not net him any points as he finished ninth, with Valtteri Bottas hot on his heels in the Alfa Romeo less than four tenths behind in tenth.

Nicely done. 👊 Lando and Daniel both gain 4 positions in the #F1Sprint, which puts the team in a good position for points tomorrow. 🇦🇹#AustrianGP pic.twitter.com/QI82ufeqza

Lance Stroll was 13th for Aston Martin, with no points but a better starting position for Sunday’s Grand Prix, as Zhou Guanyu was behind him in 14th.

It was a decent effort from the Alfa Romeo rookie who started from the pitlane after an early problem with his power unit on the formation lap.

Pierre Gasly who had contact with Hamilton on the first lap could not recover more than 15th for, two places ahead of his teammate Yuki Tsunoda who was 17th.

Alex Albon split the AlphaTauri pair in 16th, but his five-second time penalty means the Japanese will be ahead of him on Sunday’s starting grid.

The problem cannot be resolved in time for the race start and Fernando’s car is back in the garage. He is out of the Sprint. 💔#AustrianGP 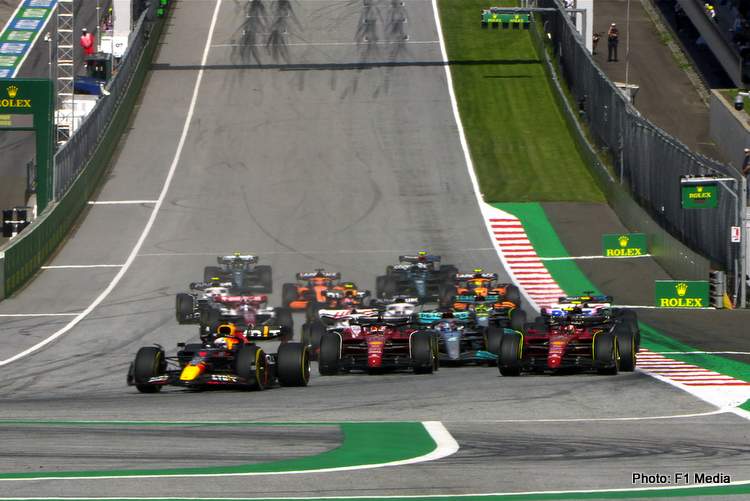 The Sprint Race lost Alonso before it even started, as the Spaniard remained stationary as the other 19 cars head out on the formation laps, with the tyre blankets still on, and was soon rolled away by the team mechanics.

The cars set off on the formation lap…

Apart from Alonso whose tyre blankets haven’t been taken off in time.

He’ll be starting the race from the end of the pit lane. #AustrianGP #F1Sprint pic.twitter.com/txBZuYs5Sh

Zhou also had a problem with his power unit, as he was coming back to take his place on he grid, after the formation lap, causing the an aborted start, and another formation lap.

Zhou reported that the engine just switched, but Alfa Romeo seemed to have restarted the Chinese rookie’s car remotely and was instructed into the pits to start from the pitlane.

All the cars had the Medium tyres bolted to them, except for the Aston Martin and Williams drivers, who opted for used Soft tyres for the Sprint.

Verstappen kept his lead at the start, as he defended robustly against Ferrari’s Leclerc, who lost out to teammate Sainz, but soon regained the position at Turn 4.

Gasly had a get together with Hamilton at the start, but ended up losing out skidding into the run-off area at Turn 1, closely missing Albon in the Williams.

A look at that Turn 1 incident 👀

Perez made a mega start from 13th, and was up to eighth at the end of the first lap and set on chasing the Haas drivers ahead of him, who were having there own fight.

By lap six, Verstappen built up a healthy gap of over two seconds keeping himself outside the DRS range of Leclerc, as the Ferrari pair started racing each other, with Sainz gaining on his teammate.

Sainz and Leclerc had a great tussle, the former almost making it past with a lunge on the outside of Turn 4, but Leclerc hung him out to dry, after which the Spaniard dropped behind.

On lap 11, Vettel brought out the yellow flags, as he spun into the gravel trap at Turn 6, while he was fighting with Albon in the Williams. The German reversed back on track but rejoined dead last.

Replays showed that the Thai driver understeered into the #5 Aston Martin.

By lap 15, Perez was up to fifth, and set his eyes on Russell in fourth, as Hamilton was trying to advance after his first lap contact with Gasly in ninth, and chasing down Schumacher in eighth, the young German putting up a great defense against the seven-time World Champion.

Hamilton finally made past the valiant Schumacher on lap 21 out of 23, as the Briton head on the chase Magnussen in the other Haas.

Ricciardo showed some promising speed and spent the Sprint Race breathing down Norris’ neck, but unable to overtake.

Aston Martin called Vettel into the pits to retire the AMR22 due to damage caused from his contact with Albon, putting the four-time Champion out of his misery, running at the tail of the pack.

Towards the end, Leclerc seemed to be having better pace than Verstappen, but not enough to cause any threat for the latter’s lead. 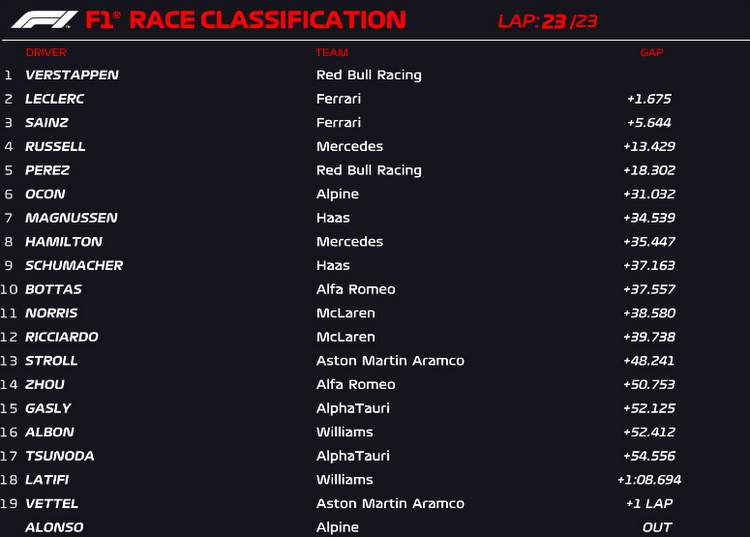