Austria FP2: Sainz fastest ahead of the Sprint Race 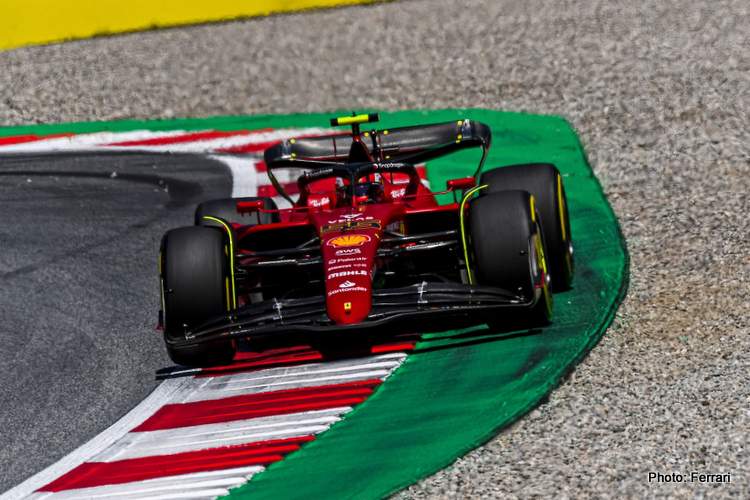 Carlos Sainz went fastest of all at the end of FP2 for the 2022 Austrian Grand Prix, as Charles Leclerc was a close second in the sister Ferrari.

FP2 was not about setting the ultimate pace, as it was used by the teams to do the final tuning on their machines ahead of the Sprint Race, as well as Sunday’s race.

Behind the Ferrari pair, Max Verstappen was third fastest in the Red Bull, but what was worth noting that the Dutchman seemed to have a tenth and a half advantage over the Ferrari pair on the long runs, as the Red Cars seemed to be suffering from more tyre degradation than the RB18.

Friday’s qualifying at the Red Bull Ring in Spielberg was a thrilling one, that ended in drama for Mercedes, as both drivers Lewis Hamilton and George Russell crashed consecutively in the final minutes of Q3, leaving less than three minutes for the rest of the field to having a final shootout.

Max Verstappen emerged on top but not by much, as only 0.029s separated him from second-placed Charles Leclerc, while 0.082s was the gap from the polesitter to third Carlos Sainz.

Sergio Perez was supposed to be fourth, but he will start from 13th, as the stewards belatedly decided to penalize him for exceeding track limits in Q2, having been allowed to take part in Q3, as the stewards were busy with many matters at the time the Mexican did committed the error. Nice one FIA!

With Perez out of the picture, the pressure will be more on Verstappen who will have to fend two Ferrari’s at the start of the Sprint Race on Saturday afternoon.

The teams’ focus in FP2 will be to make the final setup changes and tweaks ahead of the second Formula 1 Sprint Race of the 2022 season, so longer runs and harder tyre compounds should be the order of the day.

For reference, Pirelli brought the C3, C4, and the C5 compounds to the Austrian Grand Prix weekend.

The grid for the Sprint is set. It’s all in our Friday summary 👊#F1 #AustrianGP #Fit4F1 #Formula1 #Pirelli #Pirelli150 @F1 pic.twitter.com/GK4UDSoALC

Hamilton will be using a spare Mercedes chassis after his qualifying crash, while Russell will be using a different gearbox, still within the allowed number, so no penalties are expected for the Mercedes pair.

Ferrari had some changes of their own on the F1-75, as they debuted their original Prancing Horse emblem on Saturday.

The original Prancing Horse emblem made its debut – and the @ScuderiaFerrari cars are sporting it this weekend! 👍#AustrianGP #F1 pic.twitter.com/3dcH96hH0l

Twenty minutes into the session, Hamilton was yet to make a track appearance, as his W13 was not ready, as the Mercedes mechanics were fully immersed on putting it back together.

After his crash yesterday, Lewis has been given the spare chassis

Still no sign of him out on track with work going on in the garage#AustrianGP #F1 pic.twitter.com/GszftjSg9C

The seven-time F1 Champion finally emerged from the Mercedes garage, with less than 15 minutes remaining from FP2, and went ninth fastest on the spot, where he remained till the end of the session.

At the end of the session, all the drivers proceeded to the start/finish line to do some practice starts.

Max Verstappen was third fastest, 0.168s off the pace of the leading #55 Ferrari, as Fernando Alonso was fourth in the Alpine, 0.054s further adrift from the reigning Champion.

Esteban Ocon was 0.016s behind Alonso in fifth in the sister Alpine, with Sergio Perez sixth, 0.569s down from the top time.

George Russell was seventh fastest in his repaired W13, 0.630s off the pace, as Valtteri Bottas was eighth in the Alfa Romeo 0.011s behind the Briton.

Lewis Hamilton – only taking part in the final 15 minutes of the session – was ninth fastest with a new chassis, clocking a 1:09.350.

Lando Norris was tenth, almost one second off the best time. His teammate Daniel Ricciardo was 17th fastest. 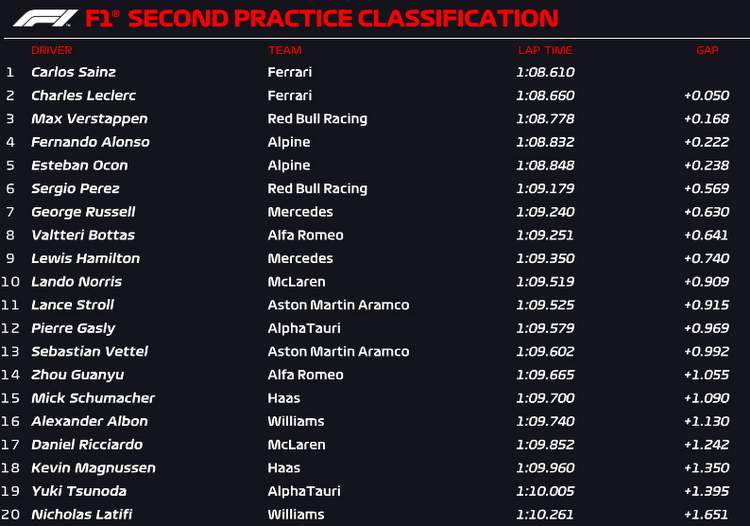