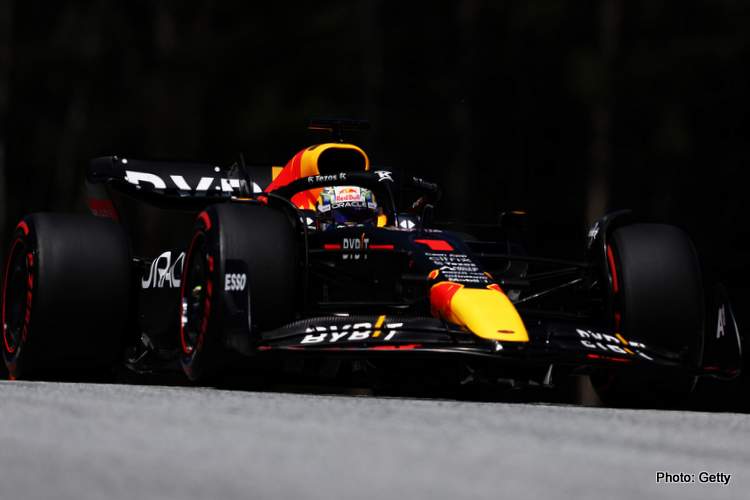 The two Mercedes drivers crashed within minutes from each other, and put themselves out of the running for a decent result in qualifying, especially Hamilton, who was looking good all qualifying until his Q3 error.

And the fact that FP1 was interrupted by two Red flags was not ideal and made the already limited practice time even less on a track that requires precision and punishes the slightest of mistakes for being a short circuit.

As it turned out, Max Verstappen took his third pole of the 2022 season, his third consecutive pole in Austria as well, as he stole it in the last seconds from Charles Leclerc, making the difference in the final sector.

Carlos Sainz was third fastest for Ferrari, as the top three drivers were separated by 0.082s, it what is one of the closest qualifying results.

Verstappen: I am confident in the car we have

Verstappen said after qualifying: “It was a very long wait of course between the two runs. That is never great, once you are in the rhythm you want to keep going.

“Also the track temperature dropping, the wind changing a little bit, but in the end it was a very tight Qualifying and it is a really challenging track to get everything right.

“There aren’t many corners but the ones you have are quite tricky and easy to make a mistake. I am quite happy with pole but also tomorrow and Sunday you can get the points. I think we have a great car,” the Red Bull ace pointed out,

“Normal Qualifying is not our strongest point so I just hope to have a clean Turn One, a good getaway. From there anything can happen but I am confident in the car we have.

“It is incredible to see the crowd here and see so much orange and see the support I have got here for a few years.

“It puts a smile on my face and hopefully we can make it a great weekend,” Verstappen concluded.

Leclerc added: “I think all three were very, very close. In the last lap, I struggled a little bit bringing the tyres back after such a long time in the pits. Max was just a little bit quicker but hopefully we’ll have an exciting race tomorrow.

“I just want to have a clean race,” he went on. “It’s been five races where I’ve had a bit of a disaster on my side. I just hope that everything will go clean in the weekend and we can finally score the points that we deserve.”

Sainz reflected on his qualifying saying: “When you look back and you see how close it is, you look back at the lap and see places where that tenth of a second could have given us pole but I am sure these two guys know where they lost it or where they gained it.

“The good thing is we did a good lap there at the end of Q3, it wasn’t easy because the tyres were very cold after the red flag.

“The trust in the car into Turn One, into Turn Three wasn’t the easiest but I know where the lap time is I just wish I could have done it a bit better.

“But I am happy with P3 and being close to these two guys,” the Spaniard concluded.

Austria kept all the drama until Q3 of qualifying, as with five minutes to go, Lewis Hamilton binned his W13 at Turn 7, on his second attempt in the final shootout, having made a mistake on his first.

It was a disappointing result for the seven-time World Champion, as he was looking good for a decent result as the qualifying developed.

Hamilton’s crash naturally brought out the Red flag, to allow for his stricken Mercedes to be retrieved, after he emerged unhurt from it.

Hamilton into the barriers. He radios that he is ok#AustrianGP #F1 pic.twitter.com/yyTtcaN9h0

Footage showed Hamilton losing the rear of his car with a snap of oversteer, which he couldn’t catch, ending up in the barriers, with extensive damage on the Mercedes’ right side, which may lead to gearbox damage, as the rear right tyre took a major bang.

George Russell was soon out to set a time after the Red flag caused by Hamilton ended, but soon caused another one with less than three minutes remaining from Q3.

Russell was going too fast than his W13 could handle at Turn 10, and he ended up losing it and hitting the barriers hard, causing major damage to the rear of the car. Another gearbox for Mercedes?

And now Russell is into the barriers – he’s ok

The Mercedes driver spins off at Turn 10

When qualifying resumed after Russell’s car was removed from the crash area, all remaining cars head out for one final shot, and Leclerc was ahead of Verstappen on track and was on provisional pole for a mere few seconds until the latter crossed the line to claim pole by a minimal 0.029s.

Notably, neither Leclerc nor Verstappen made any improvements in the first two sectors, but made the difference in the third.

Behind them, Carlos Sainz was third for Ferrari, 0.053s behind his teammate, which should be a consolation for the Spaniard who has usually been further behind Leclerc on pace.

Sergio Perez never looked good on Friday in Austria, but in the end made it to take fourth, but over four tenths slower than his pole-claiming teammate.

Russell’s banker lap before crashing was good to keep him in fifth place, ahead of Esteban Ocon in the Alpine who was sixth fastest, 0.742s off the ultimate pace.

Kevin Magnussen was an excellent seventh for Haas with a lap time of 1:05.879, 0.132s ahead of teammate Mick Schumacher, eighth in the sister car.

Fernando Alonso was outqualified by his teammate, Ocon, and was ninth fastest, as the crashing Hamilton lines up tenth on Saturday’s Sprint Race grid. 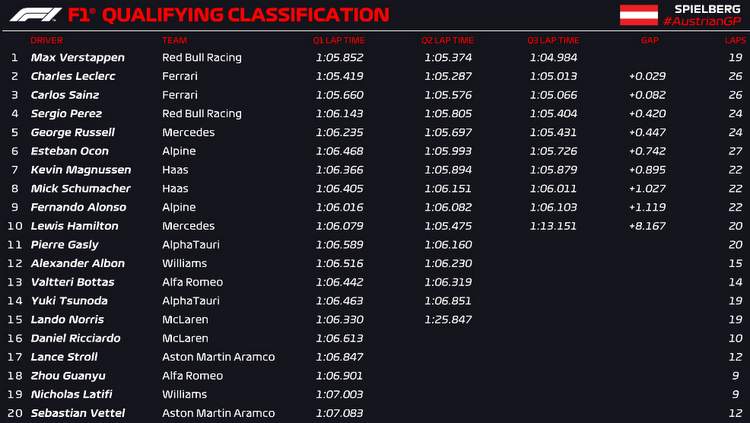 It was another drama free session in Q2, and Leclerc was fastest as well, with Verstappen second fastest behind him, while Hamilton was third fastest.

The first driver to start the sprint race outside of the top ten will be AlphaTauri’s Pierre Gasly, who qualified 11th fastest, beaten by Schumacher to Q3 by 0.009s only.

Alex Albon, in the upgraded Williams could not make it to Q3, and had to settle for 12th fastest, 0.070s behind the Frenchman.

Lando Norris was shockingly eliminated in Q2, and qualified 15th fastest, having his final flying lap deleted for going out of the track limits.

The Briton reported being “afraid to hit the brakes” to his team, in what may seem a return to brake trouble for McLaren, on a track where overheating brakes will be a problem. 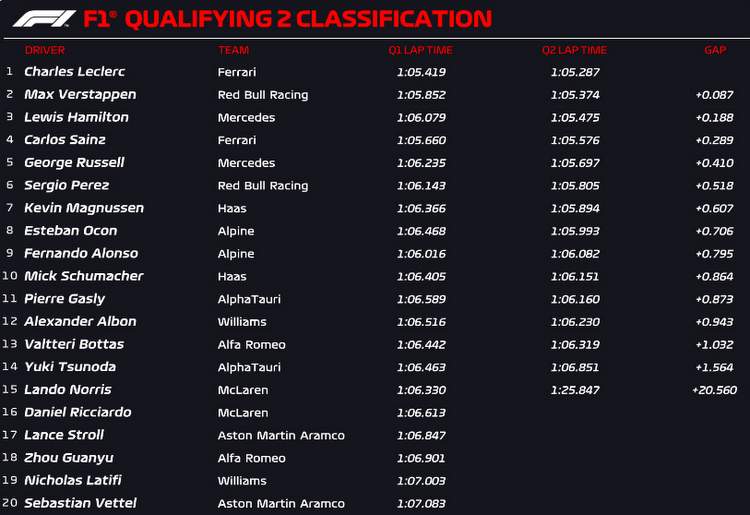 Q1 was a straightforward affair, and went on without any drama, the only thing worth noting is several drivers having their lap times deleted for violating the track limits. Verstappen was one of those drivers, as well as Sainz, Lance Stroll, and the Williams pair – Albon and Nicholas Latifi.

Leclerc lead the way into Q2, followed by teammate Sainz in second, while Verstappen made the first qualifying cut third fastest.

But what might have been shocking before is now not so outlandish unfortunately, as Daniel Ricciardo was the first of the 20 drivers to be eliminated in Q1, as he was only good for 16th, missing the cut by a painful 0.024s.

Stroll will lineup 17th on the grid of Saturday’s Sprint Race, 0.234s behind the Australian, with Zhou Guanyu in 18th, 0.054s further down the road.

Latifi qualified 19th in the Williams, with a 1:07.003, as Sebastian Vettel was only 20th, as his fastest time – initially good for 17th – was deleted for violating the track limits. 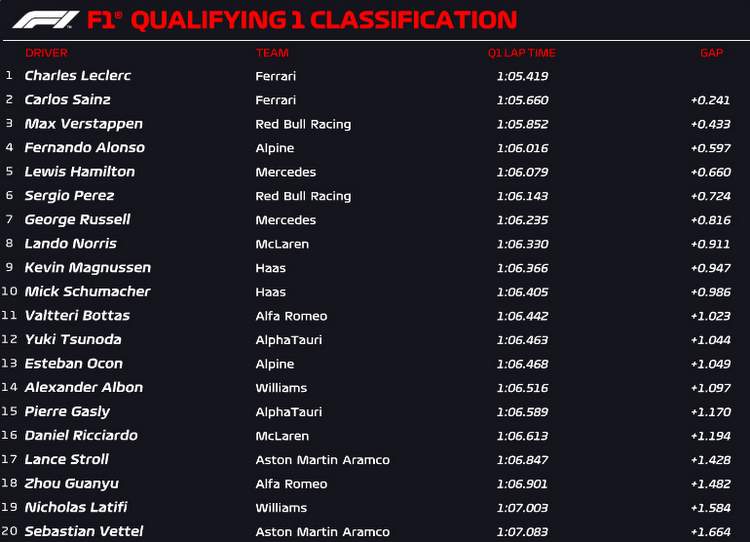