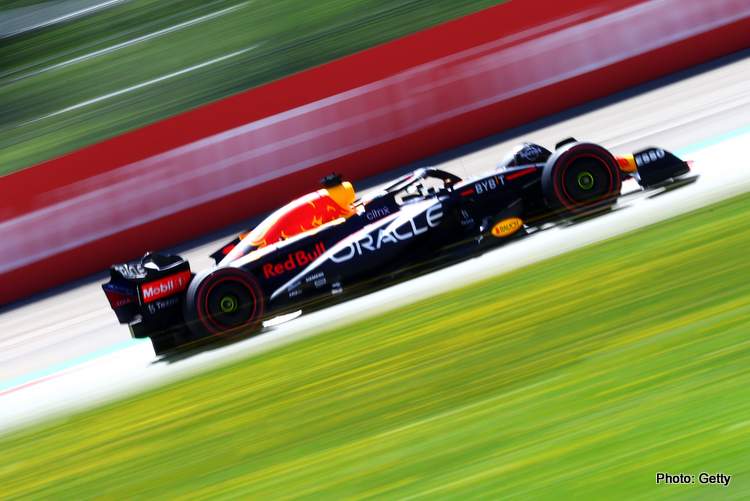 Max Verstappen hit the ground running in Spielberg, and went fastest at the end of FP1 for the 2022 Austrian Grand Prix, ahead of Ferrari’s Charles Leclerc.

The Dutchman seemed comfortable from the word go at the Red Bull Ring, and was comfortably fastest at the end of session that was interrupted twice by Red flags.

Charles Leclerc tried all he could but could not get close to the his rival, and ended the session over tenths slower, as George Russell was third fastest for Mercedes.

With qualifying set to take place on the same day, that puts the Red Bull driver at a decent advantage for Friday afternoon’s shootout.

Formula 1 will be holding its second Sprint Race of the 2022 season at the weekend of the 2022 Austrian Grand Prix, held at the Red Bull Ring in Spielberg.

The race in Austria has big shoes to fill, coming after a thrilling weekend of the sport at Silverstone just one week ago, a race where all you could think of happened, with controversy, dramatic crashes, and supreme racing all featuring during F1’s stay at the UK.

The great news is that the two drivers involved in the crashes – Zhou Guanyu and Alex Albon – are both well and fit to race this weekend, while we can hopefully throw the poison from Nelson Piquet’s statement behind us, and maybe see if Ferrari can go through this weekend without any drama…

Also worth keeping an eye on is the form the Mercedes will be in this weekend, after a strong appearance at Silverstone, because the chances are that it may well be another false sign of resurrection after the one we got from Barcelona.

A potential controversy might ignite as the Formula 1’s Technical Advisory Committee will convene this weekend to discuss the FIA’s Technical Directive regarding the clamp down on 2022 F1 cars’ bouncing, as well as the matter of some teams – Ferrari and Red Bull – violating the intent of the regulations, a topic out technical expert Mark Kay analyzed in full in his latest Tech Draft.

Max Verstappen will be setting his target of having a win at his team’s home race, where the Orange Army would be out in full to support the 2021 Champion, especially after the disappointment of Silverstone that saw him finish seventh.

Get ready for the Oranje Army to take over the Red Bull Ring! 🟠@Max33Verstappen is feeling pumped 💪🤩#AustrianGP #F1 @redbullracing pic.twitter.com/PrzP72KanS

Nevertheless, with qualifying being after FP1 immediately, giving the teams limited times to set their cars up, and the nature of the Red Bull ring being a short track punishing the slightest error, all should be the ingredients for another spicy weekend of F1 racing.

Red Bull brought some revisions to their RB18 for Austria, a revised engine cover with a central cooling exit to dissipate more heat from the power unit, as well as revised front brake cooking ducts, along with a tweaked floor.

Red Bull have come to Austria with some upgrades! 🔧

Alpine and McLaren both have tweaked rear wings in Austria, the latter also having revised rear brake duct scoop surface to improve cooling and aerodynamic performance.

Williams continued work on the upgrade package that they introduced on Alex Albon’s Fw44 in Silverstone, as they debuted a revised front suspension in for this weekend.

Aston Martin may not have introduced any updates to their AMR22, but Sebastian Vettel is sporting a special helmet to ‘Save the Bees’.

As for track action, Sergio Perez kicked off his FP1 running with an off at Turn 4, no damage done, as the Mexican rejoins the track.

And Checo goes over them momentarily into Turn 4 😬#AustrianGP #F1 pic.twitter.com/h1OY4pHW2C

Twenty minutes into the session, Lando Norris parked his McLaren at Turn 6, bringing out the Red Flags, not something none of the teams needed with so little time available for them to dial their cars ahead of qualifying on Friday afternoon.

Lando Norris has stopped in the middle sector during Friday’s only practice#AustrianGP #F1 pic.twitter.com/nJ3kgwpLYb

Norris reported on the team radio that he was “on fire and needed to stop” adding that their was smoke coming out” from under his feet.

The session was resumed with almost half the time remaining, but the session was Red flagged again ten minutes later, as there was some debris on the track on the run down to Turn 7, which appeared to be a piece of rubber that was dislodged from the kerbs after Kevin Magnussen ran over it.

Daniel Ricciardo had an issue with his DRS, Red Bull style, which kept the team working on sorting it out for the whole session. It was finally sorted with only five minutes or so remaining from the session.

Verstappen could have gone faster towards the end of the session had he not been hampered by traffic several times, but in the end his lap time of 1:06.302 was good enough to claim top spot.

Charles Leclerc was second for Ferrari, 0.255s off the top, as George Russell was third fastest for the Silver Arrows, 0.400 slower than Verstappen.

Sergio Perez did not seem comfortable with his RB18 during the session, and was only good for fourth, 0.537s down on his teammate.

Lewis Hamilton put the second Silver Arrow in fifth over two tenths slower than Russell, while Kevin Magnussen was an encouraging sixth for Haas – yet to update their car – 0.56s off Hamilton’s time.

The winner of last week’s British Grand Prix, Carlos Sainz, was nowhere near the top, seventh fastest, over seven tenths slower than the benchmark time.

That’s it for Practice today. @Charles_Leclerc and @CarlosSainz55 finish P2 and P7 in #FP1 👌

Fernando Alonso was eighth for Alpine, 0.061s further behind his compatriot, as Mick Schumacher made sure both Haas cars featured in the top ten, ninth fastest with a 1:07.246.

Yuki Tsunoda rounded off the top ten, while AlphaTauri teammate Pierre Gasly was down in 16th.

Lando Norris was last, his session cut short due to car reliability issues, as Daniel Ricciardo – suffering from DRS problems – was only 17th. Not a good start for McLaren’s Austrian weekend. 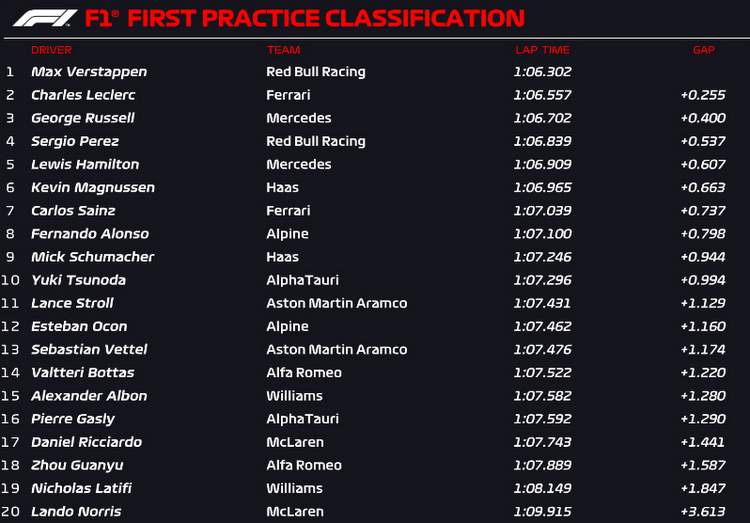