Ricciardo: We’ve got some work to do before this weekend 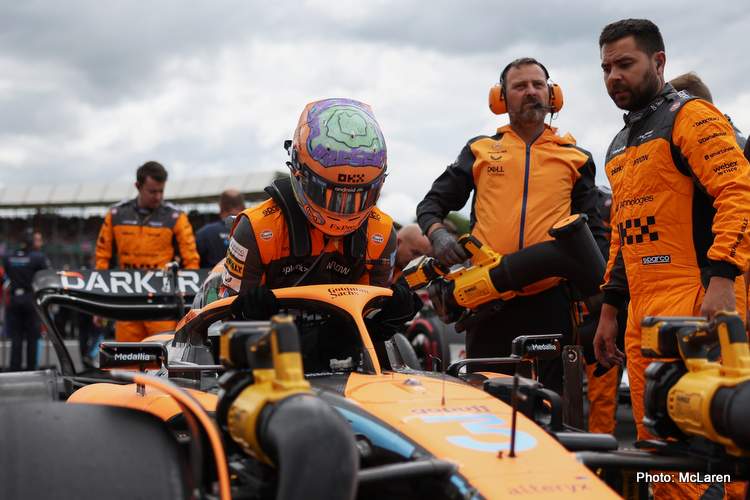 Daniel Ricciardo revealed he and McLaren have some work to do ahead of Formula 1‘s weekend in Austria , after a disappointing British Grand Prix.

After starting to show some glimpses of hope that he may be on his way to recovery from his performance slump, Daniel Ricciardo was nowhere to be seen at Silverstone, qualifying 14th, and racing to 13th, compared to a sixth and sixth for Lando Norris respectively.

Ricciardo will again be hoping to have a batter weekend in Austria, but is wary of the challenge ahead. He said in his team preview of the race: “The Austrian Grand Prix is always a fun one.

“It’s a great track in a beautiful location and it’s always an exciting race,” he went on. “The past few Sprint races have proven anything is possible so I’m ready to pounce on any opportunities that come my way, as well as creating a few of my own.

“Whilst the fans were sensational, the British Grand Prix result wasn’t what I wanted it to be, and we’ve got some work to do before this weekend,” the Australian pointed out.

“We’re putting in the hours to figure out why we lacked pace and are doing everything we can to get further up the grid in the second half of this season.

“Hopefully we will make some improvements this weekend and move forward. Let’s keep our heads high and keep going,” Ricciardo concluded.

Lando Norris added in the preview: “I’m really excited to be back in Spielberg for the Austrian Grand Prix. It’s a Sprint and it’s one of my favourites on the calendar so it’s shaping up to be a nice weekend.

“Whilst we may not necessarily be fighting for podiums like in the last two years, there is definitely an opportunity for some good points and to have some fun battles.

“It was great to see so many people in papaya this past weekend and I’m buzzing to see all the orange in the crowd this weekend clearly there supporting McLaren,” the Briton said in reflection on his home race.

“There’s always a great atmosphere and I’m hoping to build on my solid performance at Silverstone. We do still have a lot of work to do but we keep pushing forward and we keep fighting,” Norris concluded.

McLaren is currently fourth in the Constructors’ Championship on 73 points, a massive 131 points behind Mercedes in third. Ricciardo is 14th in the Drivers’ Standings while Lando Norris sits in seventh.

All of us when we realise its #AustrianGP race week! 🙌🇦🇹 pic.twitter.com/mtgF1alYPk