Silverstone FP3: Verstappen turns it on 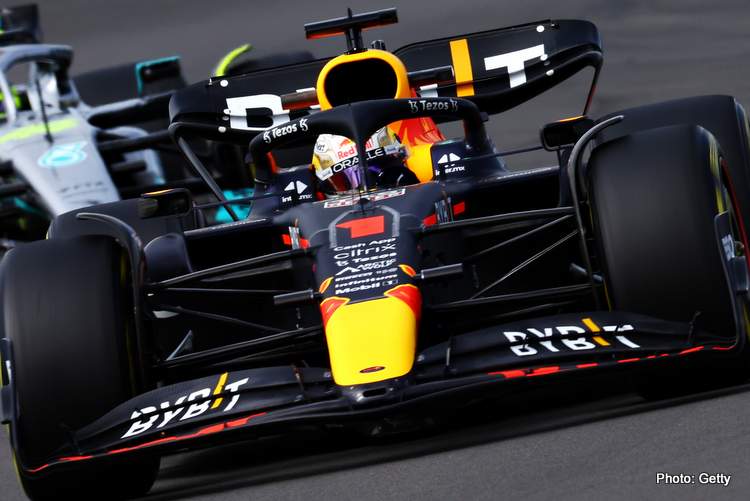 Max Verstappen sent out a clear message of intent to his rivals after FP3 at Silverstone, turning the heat on, going fastest by over four tenths.

After seemingly being off the pace on Friday, Max Verstappen was back at the front by the end of the final practice session in Silverstone, the 2021 F1 Champion going blisteringly fast, over four tenths fastest than Sergio Perez, his teammate who was second.

Charles Leclerc was the faster of the Ferrari pair, turning the tables over teammate Carlos Sainz who was only sixth fastest.

With rain ruining the FP1 at Silverstone, all Formula 1 teams were only able to get some proper running during FP2, which will make FP3 even more important to them as they prepare for qualifying and the race on Sunday.

What makes matters a bit more complicated is that most teams, if not all of them, have brought upgrades to their cars, with variable quantities of course, so they all need every minute of track time to evaluate their new parts and fine tune them.

From Friday, Red Bull seemed to be off the pace a bit, but they usually come back strong on Saturday, while Ferrari seemed in the zone, at least with Carlos Sainz who topped the second practice session, as Charles Leclerc yet to be dialed in with his F1-75 at Silverstone.

Mercedes, with their heavily updated W13, looked quite good, as Lewis Hamilton went second fastest in FP2, way ahead of George Russell, but then Silverstone is the seven-time World Champion’s special place, so expect him to be extra driven this weekend.

Lando Norris was the surprise of the pack with his McLaren, third fastest at the end of Friday’s running, but will the Woking squad maintain that pace going into qualifying and the race?

As a reminder, Pirelli’s tyre range of choice for Silverstone was on the harder side, with the C1, C2, and C3 compounds made available for the teams this weekend.

If you’ve ever used a train in Great Britain before, that’s where the phrase comes from…#F1 #BritishGP #Fit4F1 #Formula1 #Pirelli #Pirelli150 @F1 pic.twitter.com/AcjzkW6xCV

The teams didn’t waste any time, and were soon out track, with Aston Martin’s Sebastian Vettel leading the pack, under dry but cloudy conditions.

Reigning F1 Champion Max Verstappen remained in the Red Bull garage at the start of the session, and only emerged after 20 minutes elapsed.

Carlos Sainz soon reported that the bouncing related problem he suffered on Friday were not any better on Saturday, reporting in the team radio: “The problem from yesterday in the high speed are not better.”

Finally, some good news for Mercedes, as George Russell said the magic words to his team, “no bouncing”, music to Toto Wolff’s ears.

A mid-session weather updated confirmed that FP3 will be a dry one after all, as no rain was expected for 30 minutes. Good news for all the teams who need every minute of running.

Everyone is keeping an eye on the skies 🌧️#BritishGP #F1 pic.twitter.com/bz4y2evAK1

During the session, McLaren team principal Andreas Seidl revealed some issues that Daniel Ricciardo suffered from on Friday, as he was almost 1 second off the pace.

Seidl told Sky Sports F1: “Both drivers felt happy with the hard tyres at the beginning of P2 yesterday, but then Daniel struggled more on the soft tyre to get the lap together, compared to Lando, and that was the difference in the end.

“But I think from what we have seen so far today, both drivers are in good shape with the changes we made to the cars overnight, so I hope we have a chance today with both cars to get into Q3,” he added.

With 15 minutes remaining, Max Verstappen became to first driver to go under the 88-second barrier clocking a 1:27.901, 0.485s faster than the closest driver, Charles Leclerc at that moment.

Verstappen puts in a solid 1:27:901, the fastest time of the weekend so far ⏱️#BritishGP #F1 pic.twitter.com/buFx24jWMS

Towards the end of the session, Lewis Hamilton reported that his W13 was bouncing from the rear. Maybe the team has done some changes on the setup that made the 2022 Silver Arrow unhappy?

“The rear is bouncing a lot,” Hamilton said on the team radio.

All drivers head towards the start/finish line at the end of the session for practice starts.

Max Verstappen was the only driver to dip into the 1:27’s to top the timing screens at the end of FP3 on a 1:27.901, with Sergio Perez in the sister Red Bull the closest driver to the Dutchman albeit 0.410s away.

Third best was Charles Leclerc in the Ferrari who, despite improving and going faster than teammate Carlos Sainz, could not challenge the Bulls, and ultimately 0.447s off the pace – a worrying sign for Ferrari.

George Russell was fourth fastest in Mercedes who were a bit confusing throughout the session, as their bouncing seemed to have vanished at the start then returned towards the end.

Russell was 0.525s down from the top time, as Lewis Hamilton was fifth fastest in the sister car, 0.062s behind his teammate.

Carlos Sainz, after showing so much promise on Friday, was only sixth fastest a worrying 0.788s off the pace of Verstappen, 0.341s slower than Leclerc.

Lando Norris took seventh in the McLaren, 1.2s away from the top as Valtteri Bottas was breathing down his neck in eighth 0.083s away.

Fernando Alonso round off the top ten for Alpine 0.010s adrift from Schumacher, with Ocon 11th.

Daniel Ricciardo was an appalling 18th in the #3 McLaren…. 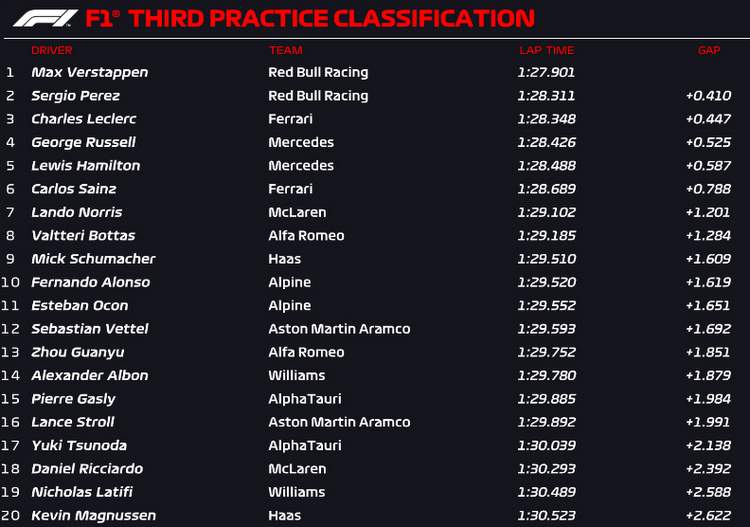