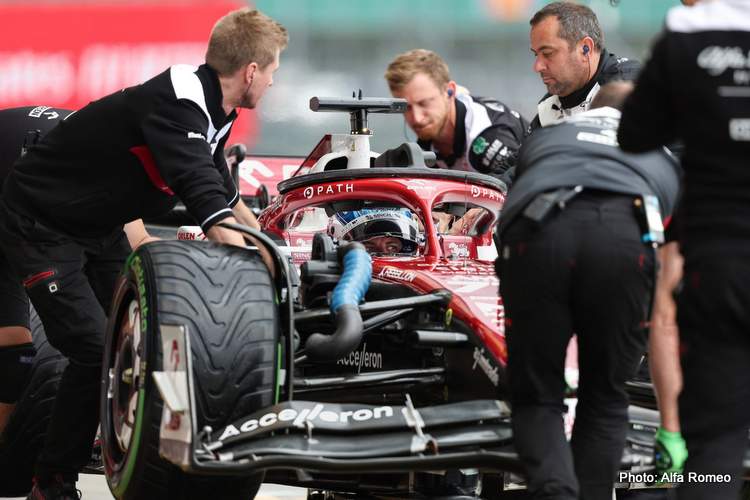 Formula 1 kicked off its activities after a fortnight at Silverstone with FP1 for the 2022 British Grand Prix, as Valtteri Bottas was fastest at the end of the rain marred session.

A boring start to Formula 1’s weekend at Silverstone, as the rain hit the track in FP1, and most teams opted not to run much, some not even running at all.

At the end, it was Valtteri Bottas who clocked the fastest time of a meaningless session, that was Red flagged in the final seconds by Aston Martin’s Lance Stroll who binned his AMR22 at Copse.

A few cars emerge onto the track including Lance Stroll, but the Canadian spins off into the gravel.

He’s stuck. Out comes the red flag, and FP1 is brought to an end a couple of minutes early.#BritishGP #F1 pic.twitter.com/Nocss32ezW

After the controversy that befell the 2021 version of the British race, with the first lap incident between Lewis Hamilton and Max Verstappen – last season’s Title protagonists – at Copse corner sending the F1 paddock into a frenzy of arguments and counter-arguments.

But if we hoped to have a more peaceful F1 weekend at Silverstone in 2022, it was not meant to be, as the Nelson Piquet saga, with the racial slur at Hamilton, that surfaced ahead of the weekend, meant the atmosphere was quite toxic before the racing even started.

However, enough was said about this, and now it is time to look ahead to the racing as this is the best way to overcome hardships in our beloved sport; racing our way through problems.

One of the most discussed subjects was the highly anticipated upgrade Mercedes are bringing to the W13 at their home grand prix, and whether it will sort out the troubled Silver Arrow, something that will affect how the season progresses for the eight-time Constructors’ Champions.

Mercedes brought a series of upgrades to the car including a new floor, a new rear wing, as well as updated vanes ahead of the sidepod inlets.

Toto Wolff is adamant that if they make a decent step towards the front runners, Hamilton can make up the difference and go for a ninth victory at home. Let’s see how that goes.

Williams are giving Alex Albon a revised FW44, with the most visible update being the new sidepods, new front and rear wings, a new floor, as well as a new diffuser.

Red Bull also were not resting on their laurels, after their decent run of form, and brought a revised body work to their RB18.

Alpine brought a revised sidepod to the A522 in Silverstone, with Sky Sports F1’s Ted Kravitz describing it: “The sidepod concept is actually quite similar to the Ferrari.

“It is absolutely beautiful, they have done a marvelous job. They have gone for the scalloped engine cover,” he added.

Alpine have been showing some decent pace this season, but reliability was a problem for the team.

All in all, we should be heading towards an interesting F1 weekend at one of the best circuits on the sport’s calendar, keeping mind the English weather that is always ready to deliver a curveball into the proceedings.

Speaking of English weather, it didn’t give us any chance, as FP1 started in mixed wet and dry conditions on different sections of the track – very wet from Brooklands to Copse but dry for the rest of the lap.

The Mercedes pair were the first out on track for installation laps, but Hamilton’s car was soon back in the team garage with work being done on the seven-time Champion’s seat.

Hamilton was back on track, almost halfway through the session, but he didn’t miss much, as track activity was scarce due to the conditions.

With 20 minutes gone from the session, there wasn’t much running going on as most of the teams opted to wait for conditions to get better with a bit of sunlight emerging.

Carlos Sainz radioed his team saying: “It is getting dry really quickly so I will box.”

And now the sun has come out 🌞#BritishGP #F1 pic.twitter.com/pDhlrAhdFK

The bit of sunlight was a false alarm, as the rain soon returned, and with 25 minutes remaining on the clock, all teams and drivers were back in the pits, with 11 drivers yet to set a time at that point.

Too bad for the fans who ventured in the mixed conditions, but they got a great gesture from Hamilton, who went out and waved to his home crowds in appreciation for their patience.

But Lewis is doing his best to cheer the crowd 😃#BritishGP #F1 pic.twitter.com/zC5Zxk6YdT

The Mercedes ace made an appearance with ten minutes still remaining from the session, probably just to make it worthwhile or the fans?

Charles Leclerc also took to the track within the final six minutes of the session, and Sainz soon followed suit. The Monegasque pitted after one out-lap.

Lewis Hamilton bolted on Soft tyres, as various drivers ventured out on track with less than three minutes remaining from FP1, but was soon Red Flagged and not resumed by Stroll’s incident.

However, Ferrari summed up the mood in FP1 quite accurately in their below tweet:

Only ten drivers registered times in FP1 at Silverstone, with Valtteri Bottas’ 1:42.249 being the fastest, followed by former teammate Lewis Hamilton in second and 0.532s off the pace.

Carlos Sainz was third for Ferrari, with Charles Leclerc fourth, while Mick Schumacher was fifth for Haas.

Zhou Guanyu was sixth fastest in the Alfa Romeo, followed by Kevin Magnussen in seventh.

Lance Stroll, who spun his Aston Martin into the gravel at Copse with less than a minute remaining from the session, was eighth fastest from time set earlier.

Yuki Tsunoda was ninth and Sebastian Vettel was tenth fastest, noting that nothing can be read into the session or the times set.

Max Verstappen did not even bother to set a time. 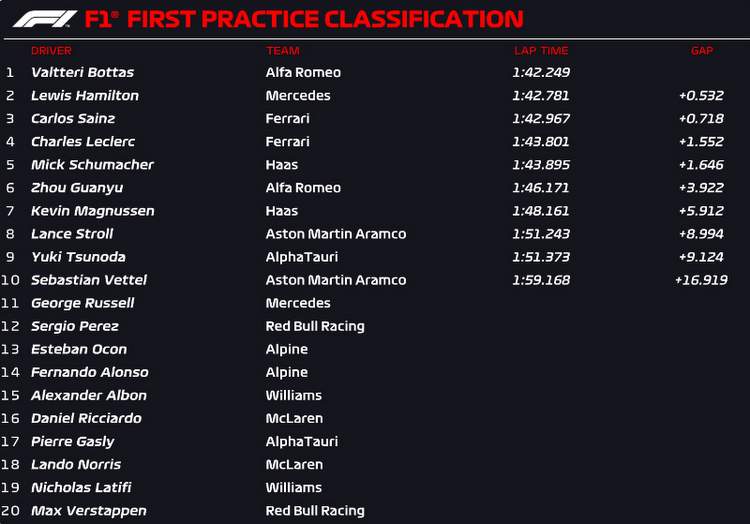