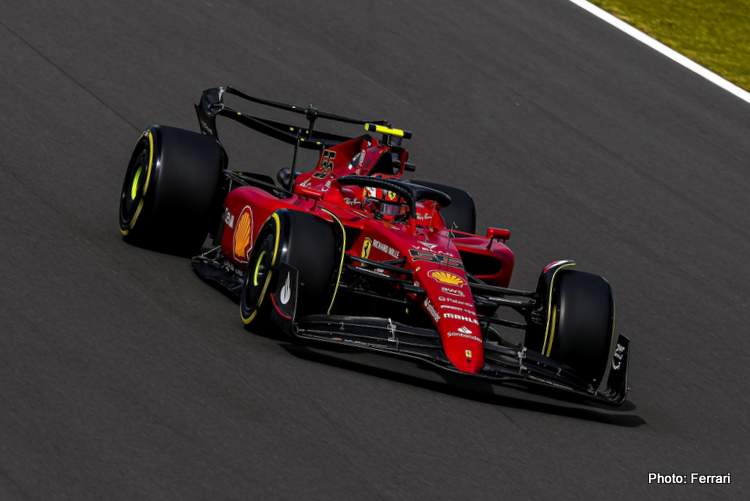 Carlos Sainz went fastest at the end of FP2 for the 2022 British Grand Prix, while Lewis Hamilton chased hard, looking good in the Mercedes.

Sainz showed early promise at the start of the F1 racing weekend at Silverstone and went fastest for Ferrari at the end of FP2, as Charles Leclerc seemed to be out of sorts on one lap pace.

However, it was Lewis Hamilton who sprung a surprise and went second fastest in the heavily updated Mercedes W13, despite reporting some “bouncing” on his car mid session.

Lando Norris was also rapid in the McLaren and went third fastest.

Formula 1‘s Friday in Silverstone started with an uneventful FP1, ruined by rain that rendered parts of the circuit too wet and others dry, so most team opted not to do any meaningful running.

Only ten drivers set laps times in the first practices session which were as un-indicative as they get given the conditions.

But with better weather forecasted for the afternoon, we can hope to see some proper running, and maybe get to know how all the updates the teams have brought are working.

A highlight from FP1 however was the “Pedal Cam” introduced on Lando Norris’ McLaren MCL36, that gave us a look at the fancy footwork of F1 drivers as they take their cars to the limit.

If you though the visor cam was cool, check this out.

The second practice session started in dry and clear conditions, as all teams were keen to send their drivers out and make up for the lost time from the earlier session.

Max Verstappen reported after his early run over the team radio: “I hear a bit of a weird noise but if you think it is okay I will continue.”

However the team informed him to stay on track. Shortly afterwards, the Dutchman repeated his complaint saying: “The sound is still here, I don’t know what it is it is just like something is just touching.”

It seems the problem was related to a broken floor on Verstappen’s RB18 after hitting a curbs hard.

Almost 15 minutes into the session, Lewis Hamilton delivered an ominous message to his team saying: “We’re bouncing a lot in the high speed.”

Not exactly what Mercedes hoping to hear from the star driver…

Almost halfway through the session, the teams started bolting the Soft tyres on their cars to head out for some qualifying runs before shifting their focus towards race simulations later.

Alex Albon was out on track showing off the new upgrades – which Nicholas Latifi did not get – with quite a flashy display of flow-vis.

Carlos Sainz also reported almost halfway through the session that he was losing time due to bouncing on his F1-75.

” I lost a lot through the high speed with the bouncing,” he said.

Another Spaniard was also suffering from bouncing, as onboard footage from Fernando Alonso’s Alpine shown significant bouncing in the corners.

Verstappen re-emerged on the track with twenty minutes remaining after the team did some work to sort out the noise he reported earlier, but nothing changes according to the driver.

On the other side of the garage, Sergio Perez had his car stripped down in the garage, as Sky Sports F1 reported the team was having “unexpected issues” with their upgraded sidepods.

Lando Norris had pit problems as his car was lowered to the ground with no wheels on it, due to a problem with the team’s rear jack. Good thing it happened in practice and not in the race.

A bumpy pit stop for Lando 😮

Looks like the rear jack failed before the tyres were strapped on#BritishGP #F1 pic.twitter.com/caQ9hqlhFo

Esteban Ocon suffered a crack in his sidepod towards the end of the session which required maintenance from the team.

Sebastian Vettel also suffered a broken floor on his Aston Martin, ten minutes from the end of the session, which was strange as the German assured his team that he did not go off or hit any curbs.

Lewis Hamilton also reported some damage to his team saying: “Something might have fallen off the car at Turn 9. It has come off the floor for sure.”

And indeed there it was: 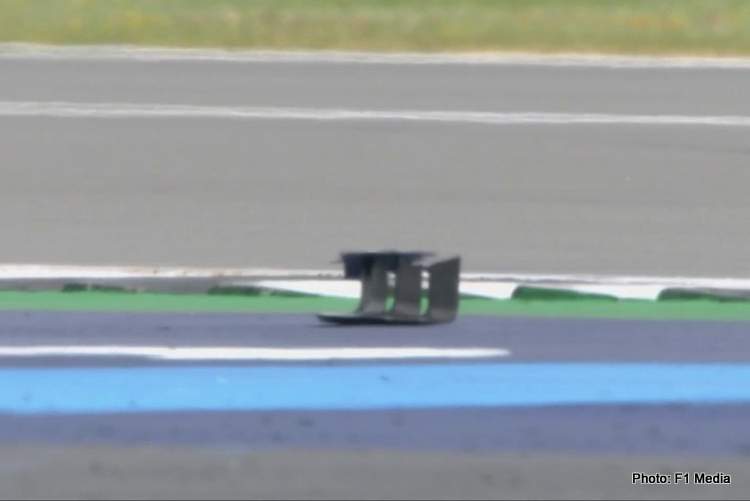 Lando Norris was impressive in the McLaren and was third fastest 0.176s off the pace of Sainz and a mere 0.013s off Hamilton.

Max Verstappen was only good for fourth 0.207s off the pace, but showed some decent long-run pace during the race simulations.

Charles Leclerc was clearly not feeling comfortable in his F1-75, and was fifth fastest 0.462s slower than his teammate.

Fernando Alonso took a decent sixth position for Alpine, 0.753s slower than the top time, but 0.058s ahead of Sergio Perez who was seventh for Red Bull, after a troubled session for the Mexican.

George Russell could not match Hamilton and was only eighth fastest in the other Silver Arrow, 0.857s away from the benchmark time.

Daniel Ricciardo was also far off his teammate, ninth fastest with a 1:29.902, as Lance Stroll rounded off the top ten 0.040s behind the Australian. 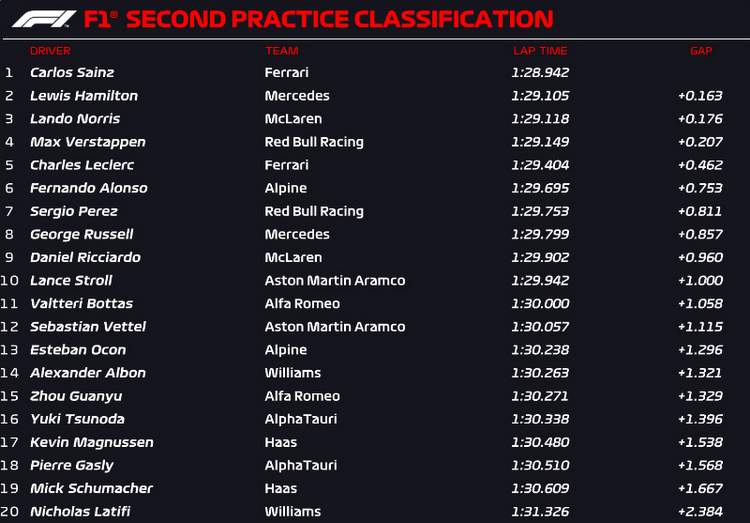