Leclerc: If we play it smart, we can come back to P4 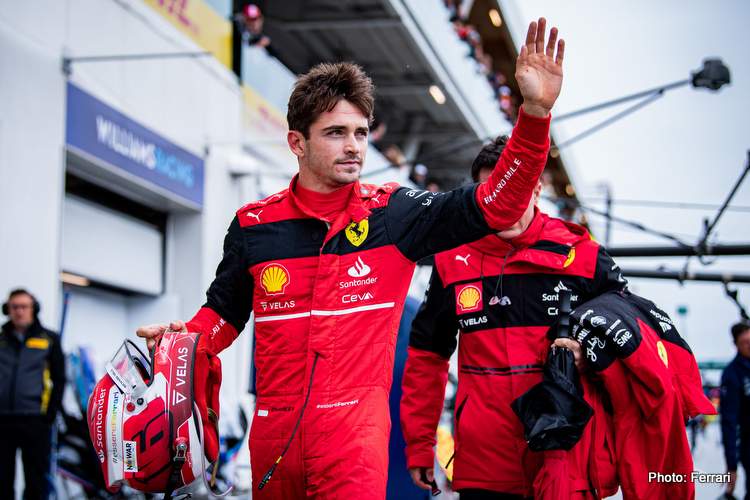 Charles Leclerc will start the 2022 Canadian Grand Prix 19th, being hit by a grid penalty for taking a new power unit, but he believes P4 is still on the cards if Ferrari play it smart.

Charles Leclerc is still suffering the repercussions of his DNF in Baku last week, as after suffering from a power unit failure, an irreparable one, Ferrari has to bolt a new power unit to his F1-75, which mean he will start from the back of the grid in Sunday’s Canadian Grand Prix.

His Title rival, reigning Formula 1 Champion Max Verstappen – on the other hand – will start the race from pole, but Leclerc still feels that all is not lost yet.

Speaking the media on his race prospects, Leclerc said: “It makes it a bit harder for us but it’s inevitable, so there is disappointment, but on the other hand I knew it was coming so I kind of expected it.

“I don’t know if there will be any more penalties other than that, but overall, I think it’s the best we could have done. It’s not a good situation to be in, but I guess we took the right decision.

Better to take all the penalties in one race

“I mean, to put it all on one race, I prefer that instead of having multiple races with like 10 grid places penalty,” the Monegasque insisted.

“We’ll try to make the best out of it tomorrow and then hopefully we can have no reliability issues anymore and focus on ourselves and catch back the Red Bulls in front of the championship.”

“I don’t know whether it will work out or not,” was 24-year-old responded to a question about his race expectations.

“It was a bit more difficult to overtake than what I initially thought yesterday, but overall, I think we’ve got quite a good pace in the car, if we play it smart with the strategy having some clean air we can come back to P4 or something.

“So that is the goal and yeah, I’ll give it everything,” a defiant Leclerc said.

Asked if he thought his teammate, Carlos Sainz can win starting from third on the grid, Leclerc said: “Well, I hope so.

“Obviously, if I’m not able to do that, then the second person I want to win is Carlos. Yeah, that will be great for him. I think he’s been competitive, this weekend is going to be very close with Max.

“Hopefully with a late safety car and a little bit of luck, I can join the battle also, but obviously this is quite optimistic,” he admitted.

Engine penalties mean we’ll be starting last tomorrow. But everything is possible and we’ll give it all 💪 pic.twitter.com/ccYoVxa1s9

Leclerc ran briefly in Q1 in Montreal’s qualifying on Saturday, makin sure he posted a time faster the AlphaTauri’s Yuki Tsunoda – also starting from the back of the grid for engine-related penalties –  to start 19th instead of 20th.

In Ferrari’s post qualifying report the driver said: “That’s the best starting position we could secure this weekend. What’s important is that the feeling in the car was good and I could do a few more laps ahead of the race.

“We gained a place by qualifying ahead of Yuki (Tsunoda). It’s only one position, but every little detail can help on a weekend like this.

“Our focus is on giving it our all tomorrow,” the 15-time pole sitter concluded.

Laurent Mekies, Ferrari’s Racing Director revealed Ferrari had a complicated qualifying with a Sainz, less so with Leclerc.

“For Charles, his day was less complicated but possibly rather more frustrating, as we called it a day after Q1 given that he starts from the back of the grid tomorrow,” he said.

“We decided to introduce new elements on his car – control electronics and power unit – thus incurring penalties, because we felt it was the best way to react to what happened in Baku.

“Here in Montreal, overtaking is less difficult than at other tracks, even if we saw on Friday that it’s not that straightforward. Also, there are often incidents in this race such as Safety Cars or stoppages which could provide opportunities to move up the order.

“Charles is fired up to make up a record number of places,” Mekies insisted.

Considering the penalties he has to take for tomorrow, his quali is over. Good job 👊 #CanadianGP pic.twitter.com/tcyyHm4nZ6