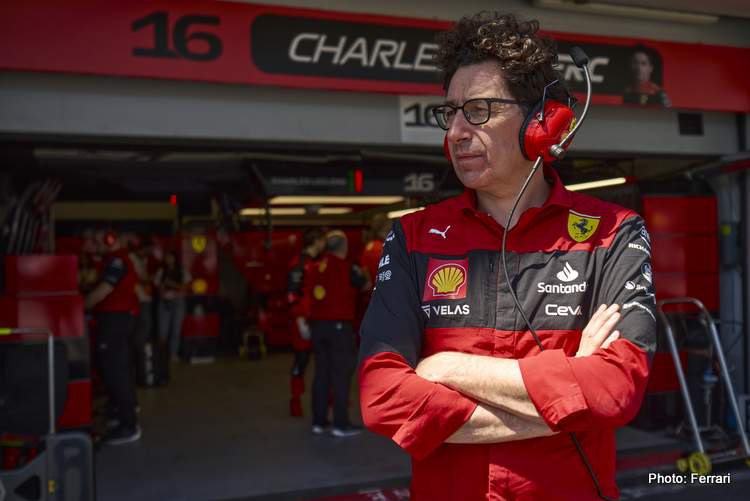 Mattia Binotto had to watch both his drivers retire from the 2022 Azerbaijan Grand Prix, admitting he wasn’t surprised, but concerned and somehow disappointed.

Ferrari entered the 2022 Formula 1 season with a decent piece of kit with the F1-75, that has proved to be the fastest car on the grid, especially in the hands of Charles Leclerc, evident by his six pole positions so far this season.

Ferrari also had a revamped and improved power unit bolted to the back of the F1-75, which has shown to be quite impressive in terms of performance, but rather fragile, as Leclerc suffered his second engine-related DNF in Baku on Sunday, after also retiring from the Spanish Grand Prix with a Turbo problem.

Leclerc’s retirement came after Carlos Sainz also parked his car early on in the race due to hydraulic system failure, dealing a painful blow to Ferrari 2022 F1 campaign.

A tough break for Leclerc as his Baku hopes go up in smoke 😖#AzerbaijanGP #F1 pic.twitter.com/LEYq3hVA8f

Asked of he was surprised by the failures his team suffered in Baku given the maturity of the power unit regulations, Binotto said: “I’m not surprised and certainly concerned and somehow disappointed, because I think it’s something that we need to try to fix, and we didn’t fix it yet.

Binotto refuses to blame the team

“I cannot blame the team, because I know what has been the effort they have put in order to address the performance from the past. I know it’s a long journey.

“We didn’t get enthusiastic at the start of the season. I think it will not be the last today. As I said it’s a journey which we are on, and there are still another step which is required right now.

“As a team again we will stay united, work hard. We have been able to do a proper job so far. We know that the job is not finished, but we will do it.

“I would rather prefer to have good performance and try to fix reliability rather than vice versa,” a defiant Binotto added.

His last statement somehow makes sense, as with the power unit design being frozen until 2025, only reliability-related upgrades are allowed.

Ferrari have no clear idea about what happened

Ferrari don’t seem to know what exactly happened with their drivers, as when asked if they have pinpointed what went wrong, Binotto revealed: “Honestly not, we still need to analyse and understand.

“Looking at the two cars, they had different problems. Carlos mentioned where it was coming from. We’ll look at the hydraulic system and hopefully we’ll identify it.

“Charles had a different issue, certainly engine related,” the Ferrari boss went on. “It’s quite obvious considering the smoke. Is that something we had in the past, I don’t think so, but maybe yes.

“We do look as well at what happened to our customer teams. Only looking at the telemetry data, we cannot have a clear answer to the problem.

“The components will be shipped back to Maranello. As usual, we will disassemble and try to understand and to fix the problems as soon as possible,” Binotto stated.

Not only did both Ferraris break down in Baku, but Alfa Romeo’s Zhou Guanyu had to park his C42 as well as Haas’ Kevin Magnussen, both drivers being within a shot of scoring some points.

“What happened to Magnussen, yes, it’s something which again, we do not have full clarity right now. So if it is something similar to what Ferrari has encountered in the past or not? We have no answer yet,” he admitted.

Now it’s Magnussen with engine issues. He pulls over and is told to turn off the car

Ferrari left Baku scoring zero points, while Red Bull bagged the max haul of points possible, and as it stands the Scuderia are now 80 points behind the energy drinks outfit in the Constructors table, as Leclerc lost second place in Drivers’ Standings to Sergio Perez, the Mexican now ahead by 13 points.

Binotto not looking at the points’ gap now

Binotto said he is not looking at the points situation, and claimed: “It’s not something we are looking at honestly. We are focused on ourselves, focused on trying to get the most out of our race weekends. Trying always to improve ourselves.

“We know that to get to the top there is still a gap,” he admitted. “We proved that we had some problems in the last events. We are simply focusing on trying to improve ourselves and race by race. It’s only at the end of the season that we can do the addition and see where we are.

“My only concern today is to discover what are we lacking to be alright on all 360 degrees. Today Ferrari had reliability issues. The start of the race for Charles was not perfect. The team had issue at the pit stop and we had different issues at the last event.

“So there is still much to improve, without looking at the others. I’m pretty sure that the others as well have problems, or have not always made the right or the best choices, but that’s not what we are caring about.

“So we’re really trying to take care of our team and focus on ourselves, and that’s it,” the Swiss-born Italian maintained. (Additional reporting by Agnes Carlier)