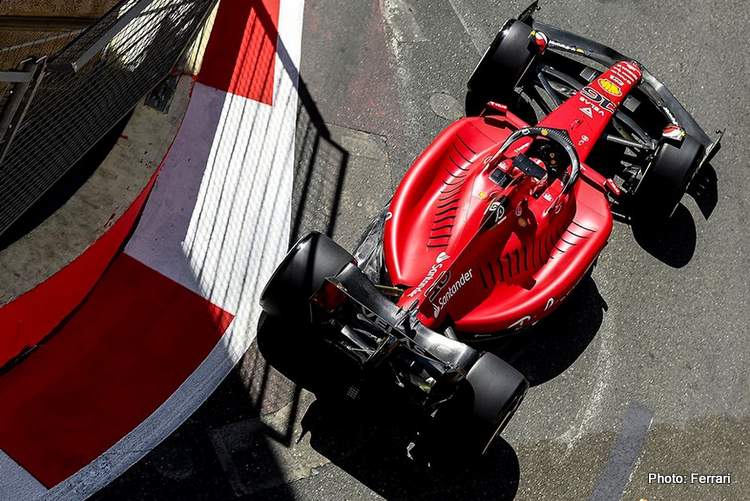 Charles Leclerc took control of the proceedings in Baku, and went fastest at the end of FP2 for the 2022 Azerbaijan Grand Prix, followed closely by the Red Bulls.

Sergio Perez maintained his advantage over teammate Max Verstappen, to go second fastest, as the latter was only good for third fastest.

Leclerc had a scare towards the end of the session, as he reported to the team: “What’s going on? There’s a problem with the engine no?”

The team responded that “everything is fine”, as the Monegasque went on with his business. False alarm.

FP2 in Baku is probably more relevant to qualifying, held at the same time of day on Saturday, while the race will be held at an earlier time on Sunday, which makes the FP1 and FP3 more representative to it in terms of track conditions and temperatures.

With Sergio Perez finishing FP1 fastest of all, Max Verstappen was on the back foot yet again, as he wasn’t at ease with his car around the streets of Baku.

The reigning Formula 1 World Champion reflected in Friday’s press conference on the difficulties he faced with his RB18 in Monaco saying: “These cars are so heavy and long.

“You want a car that turns better and that is not over dramatic,” he added.

So is Verstappen suffering from the same problems that hampered him in Monaco? Not to mention the suspiciously operating DRS system seen on his car during FP1.

Max Verstappen’s rear wing is flapping A LOT on the main straight in Baku 😬 pic.twitter.com/5OyrDqPegF

“Obviously we’ve seen it, we’ve got the data from it and we’ve got the comparison to Sergio’s wing,” Christian Horner said to Sky Sports F1.

“There are some modifications or tuning that we need to do just to make sure that we eradiate that for this afternoon. We just need to look at the set-up of it, the rigidity of it and hopefully we can get on top of it for this afternoon,” the Red Bull boss added.

And whether they are gaining and advantage that might prompt other teams – Ferrari – to protest, Horner said: “I think they already have.

“It’s detrimental to performance and it’s not enhancing for performance, but the guys [engineers] are into it,” he stated.

Less than five minutes into the session, Lando Norris brought out the Yellow flag, as he missed his braking point into Turn 3, but ended up safely in the run-off area, only to rejoin the track after a three-point-turn.

As the cars took to the track at the start of the second practice session, Max Verstappen’s car remained in the garage, as the team mechanics worked on the rear wing of the #1 RB18 in an attempt to fix the problems they faced in FP1.

The Dutchman wasn’t held up for long, though, and was soon out on track.

Sebastian Vettel, overshot his braking point at Turn 1, taking to the run-off area, as the team reported to him his problem was “brake temp related”.

A plastic bag on the track caused some inconvenience for Ferrari’s Carlos Sainz, which wasn’t a nice thing to do from whoever threw it out there.

Did anyone lose their bag? 👀

Carlos Sainz runs into it on track #AzerbaijanGP #F1 pic.twitter.com/Z7hHznRrac

Alex Albon had a strange moment, almost halfway through the session, as he kissed the wall with his front-right tyre at the first kink along the back straight, and head back to the team garage for a suspension check.

Alex Albon hits the wall in the kink at Turn 17 and has to visit the pits after picking up damage #AzerbaijanGP #F1 pic.twitter.com/eUyF9cysU1

Mick Schumacher brought the yellow flags out, after going deep into Turn 4, and Charles Leclerc did the same minutes later at Turn 7, while Perez also had a couple of moments at Turn 1 then Turn 15, the latter ruining his teammate’s, as well as Carlos Sainz’s, attempts at a fast lap.

Mercedes and Ferrari continued to bounce around, but whereas Ferrari was at the sharp end of the proceedings, the Silver Arrows were languishing in the midfield.

Within the last 15 minutes, the drivers settled into their long runs, and while doing his own race simulation, Lance Stroll joined the group of drivers going deep into Turn 15, less than ten minutes away from the session end, causing a brief  Yellow flag. George Russell copied the Canadian’s error himself.

Max Verstappen was third, 0.108s further behind his teammate in the sister Red Bull.

Fernando Alonso sprung a surprise and was fourth fastest for Alpine but 0.918s down from the top time, as his compatriot Carlos Sainz took fifth fastest 0.132s adrift.

Pierre Gasly was the faster of the AlphaTauri drivers this time around and was sixth fastest with a 1:44.315, 0.233s faster the Mercedes’ George Russell who was good for seventh.

Yuki Tsunoda was eighth fastest, making it two AlphaTauris in the top ten but was two and half tenths slower than his teammate.

Esteban Ocon was ninth fastest with a 1:44.609, while Lando Norris broke into the top ten having missed out on it in FP1, but was 1.547s off the ultimate pace of Leclerc.

Lewis Hamilton was 12th fastest, behind Sebastian Vettel who was good for 11th, while Daniel Ricciardo was only 14th fastest. (Additional reporting by Agnes Carlier) 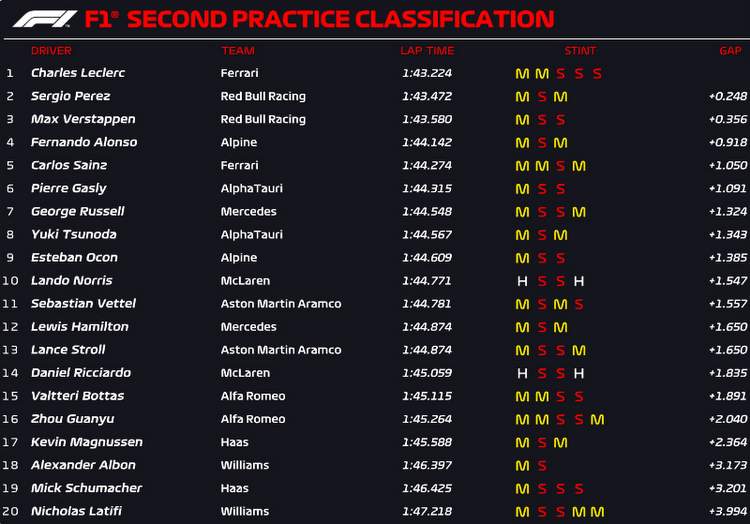