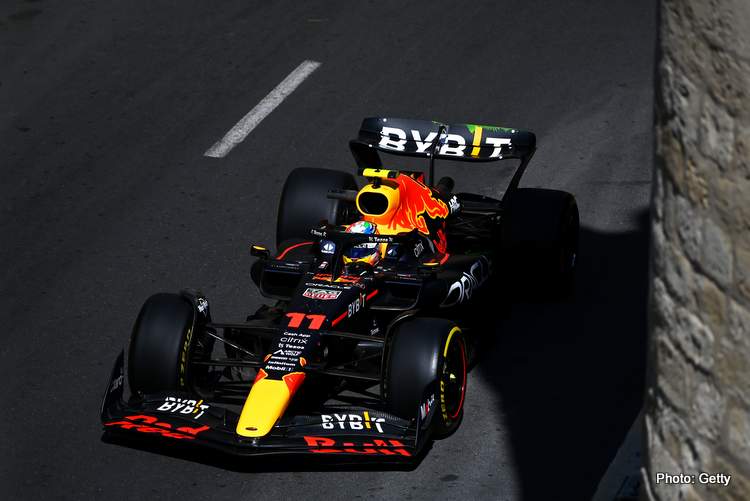 Sergio Perez retained his momentum from his victory in Monaco a fortnight ago, and went fastest in FP1 for the 2022 Azerbaijan Grand Prix in Baku.

The Mexican was off to a flying start in Baku as he went fastest of all at the end of FP1 for the Azerbaijan Grand Prix, the scene of his first victory with Red Bull back in 2021.

Charles Leclerc was second fastest for Ferrari, while Max Verstappen took third, noting that Perez survived a close moment with the barriers while on his fastest lap.

Perez on the limit to go P1! 😳#AzerbaijanGP #F1 pic.twitter.com/95BsRDd7zh

After a short break, Formula 1 was back in action, and at a second street circuit in a row after Monaco a fortnight ago, the Baku City Circuit, the venue for the 2022 Azerbaijan Grand Prix.

Baku, has that long straight where the cars need to have high top speed to make an overtake stick, but the twisty parts of the circuit are Monaco-like and require maximum traction and sufficient downforce, which makes setting up the car quite tricky this weekend.

You can check out our latest Tech Draft, by our tech guy Mark Kay for more details on Baku requirements, here.

Ferrari’s will be looking to make up for the mess they made in Monaco, while they don’t need to worry about the car, as the F1-75 is fast, but they need to operate efficiently, or endure the wrath of Charles Leclerc.

Will Mercedes bounce around Baku? And can the Daniel Ricciardo of old re-emerge?

As for Mick Schumacher, he had better keep his VF22 out of the walls.

Not a promising start for Mick Schumacher, as the German suffered from a liquid leaking from the side of his Haas, a few minutes into the session, causing a virtual safety car, after he went off at Turn 12.

Schumacher did not do any further running during the session.

Early signs for Mercedes were not positive as well, as the onboard with Lewis Hamilton showed that the W13 was back to its bouncy ways. Ferrari were also experiencing some extrem “porpoising” as well.

“The bouncing doesn’t feel nice in the car,” Carlos Sainz said over the team radio.

Lance Stroll was in a bit of trouble as he went a overboard at Turn 15, but luckily his Aston Martin survived that moment.

Nicholas Latifi brought out another Virtual Safety Car, 15 minutes into the session, as his car simply shut down, and he stopped at Turn 5. The session was resumed with almost 40 minutes remaining.

📻 “The car just died, it switched off the power completely”

Latifi stops out on track following an issue with his car 🛠#AzerbaijanGP #F1 pic.twitter.com/cMLFnPyD8r

Verstappen reported several times that the “wind on the straights was insane”, and that was proved by the onboard footage of the DRS on the #1 Red Bull flapping and looking vulnerable to failure.

Another DRS nightmare for the reigning Champion in Baku?

Verstappen had a spin late in the final seconds of the session at Turn 15.

“That was a good bit of parking, wasn’t it!”

Max Verstappen finds himself facing the wrong way in Baku after spinning at the end of FP1 ❌ pic.twitter.com/6MEdlfjg0M

Sergio Perez best efforts yielded a 1:45.476, good enough for top spot at the end of FP1 in Baku, as Charles Leclerc was 0.127s off the Mexican in second.

Max Verstappen, again not as comfortable in his RB18 as his teammate, was third fastest, 0.334s off the pace, as Carlos Sainz completed the top quartet in, a further 0.202s behind the Dutchman.

Best of the rest was Fernando Alonso, who’s last minute effort produced a 1:46.571, that put him fifth fastest, but over a second down from the benchmark time.

Lewis Hamilton was sixth fastest almost a tenth behind the Spaniard, with AlphaTauri’s Yuki Tsunoda 0.029s further down the road in seventh.

George Russell was eighth fastest in the sister Mercedes 1.229s down from the top time, as Pierre Gasly took ninth in the other AlphaTauri, 0.125s slower than the Briton.

Esteban Ocon rounded off the top ten, 1.441s too slow.

Notably, both McLarens were out of the top ten with Lando Norris 11th fastest, while Daniel Ricciardo was 18th. Not a good start for the Australian. 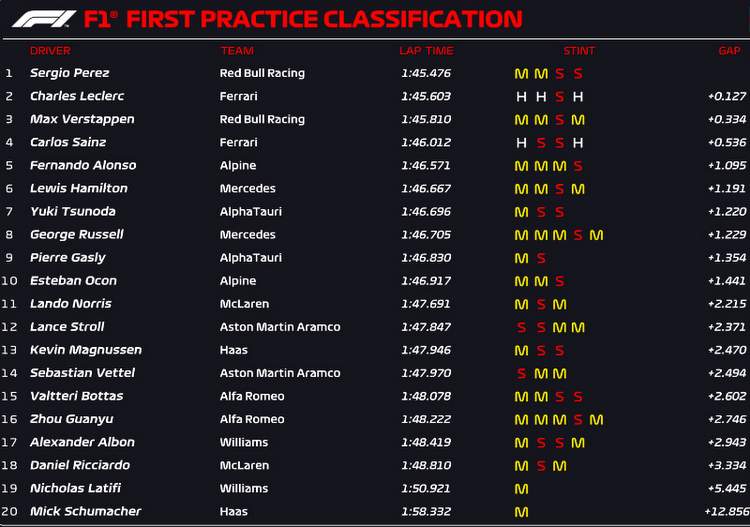