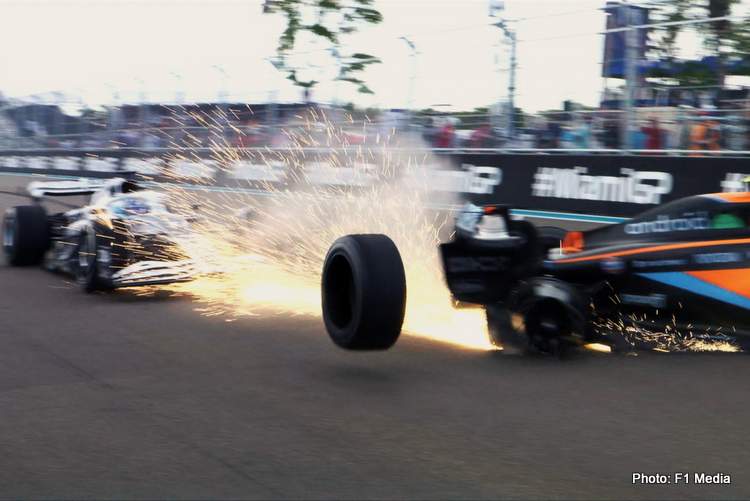 Pierre Gasly offered his view of what went down between him and Lando Norris at the 2022 Miami Grand Prix, blaming the Briton for clipping his front left tyre.

The tangle made sure both drivers ended up out of the race, with Norris out on the spot, while Gasly retired a bit later in the pits.

Gasly had been punted earlier by Alpine’ Fernando Alonso, an incident that earned the Spaniard five-second time penalty, and caused damage to Gasly car that was the reason behind him going slowly when the clash with Norris occured.

“On our last lap going back to the pits, [I] was going slow after Turn 7, and all the cars passed,” Gasly explained to the media after the race.

“I was trying to turn right to give room, and then Norris came and clipped my front left tyre,” he claimed.

Gasly revealed that Norris apologized for the incident: “We spoke, he came to apologise, but unfortunately it’s not going to give us back the points.

“It’s a big shame,” he went on. “I’m extremely disappointed because it was a great afternoon. We had a brilliant start, passing Lewis [Hamilton] into Turn 1, running in P7 after that.”

Alonso went a step too far

Of his Alonso incident, the AlphTauri driver reflected: “We would have had a great battle with Fernando, but he just took it a step too far, and unfortunately today it’s ruined our race.”

Gasly didn’t feel the need to apologize to Norris when asked about it and said: “I don’t think that’s necessary.

“I was trying to give room. I don’t know where I could have gone, and I was slow, busy trying to get back to the pits,” the Frenchman maintained.

“Obviously, [it’s] unfortunate for him, because it’s not the way you want to finish the race, but I think obviously it all started with Alonso, who crashed into us and [broke] our car,” he explained.

Later in the team’s press release, Gasly said: “It’s a big shame today, the race was going well until the contact with Alonso, where we suffered damage on the car.

“Unfortunately, it was impossible to stay on track after that, as the car was too damaged, and then on the way back to the box Norris and I touched.

“There are some positives to take away from today still, we had a strong start and the pace of the car was quite good, but we’re obviously disappointed with today’s result,” the winner of one grand prix concluded.

one of those days you gotta keep your chin up and look ahead to the next race 👊 pic.twitter.com/K1WNaWyxzG