Hamilton: Waiting for a change in fortune 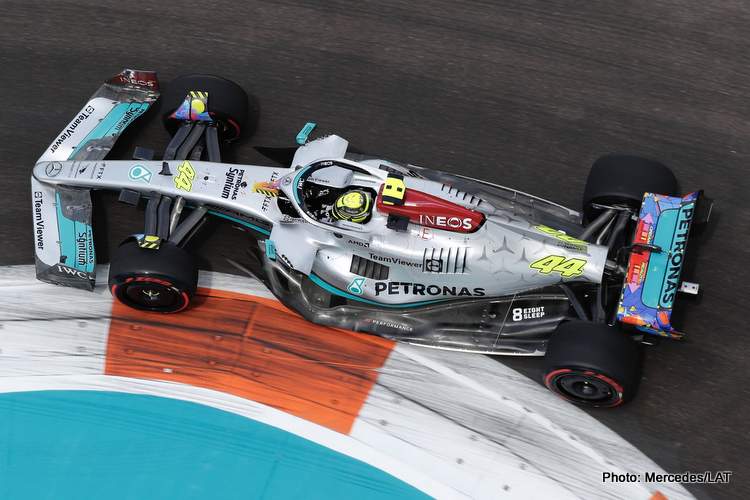 Lewis Hamilton admitted he is waiting for a change in fortune, as an ill timed Safety Car at the 2022 Miami Grand Prix meant he lost position to George Russell, finishing an eventual sixth.

The seven-time Formula 1 Champion was clearly frustrated, as he did not pit when the Safety Car was deployed, but admits it was up to his team to decide.

“When you’re out there, you don’t have all the information,” he told the media after the race. “You don’t know where everyone is . You don’t have the picture that they have on the screen.

“So, when you’re given the responsibility to make a decision, it feels like you’re gambling. I don’t like that. So, I was like you guys to make the decision. But either way, we were just unfortunate,” the Briton maintained.

Speaking afterwards in the team’s race brief, Hamilton said: “We got good points as a team today, so we’ll take them and move on.

Hamilton was a sitting duck at the end

“I was unfortunate with the safety car and I’m waiting for a change in fortune but until then, I’ll just keep working as hard as I can,” he added.

“George did a great job in that first stint on the Hard tyre, in hindsight the Hard tyre was probably the better race tyre for today but George did well to recover from his position and we got fifth and sixth which is good points for the team.

“I was a bit of a sitting duck in our move but George did great, was very fair and on old tyres, there wasn’t much I could do. Even running in our positions, it’s still racing, it just changes your perspective.

“I thought the track was great, I don’t think the chicane is ideal but that’s the only weak point on this circuit,” the Mercedes ace concluded.

Mercedes could afford to gamble with Russell

Mercedes boss Toto Wolff, lamented Hamilton’s bad luck with the Safety Car, but was satisfied that the team maximized their points’ haul being the third fastest behind Red Bull and Ferrari in race conditions.

“We maximized our points today,” the Austrian said in Mercedes press release. “With George’s starting position, we could afford to roll the dice on a long stint on the Hard and it worked out for him with the safety car, while it was unfortunate for Lewis.

“We were third-quickest on the road, this is where we are, we don’t sometimes show it in qualifying but in the races, we’re generally better. We had a good Friday but didn’t quite understand why that was.

“We will be looking at all the data we’ve generated this weekend, working through the sessions on Friday to better understand the strong performance, and take those learnings back to Europe,” Wolff added. (Additional reporting by Agnes Carlier)

Nice one, Team 👏 Maximising the points on offer with P5 and P6 at the #MiamiGP 👊 pic.twitter.com/d08ysQt0dL