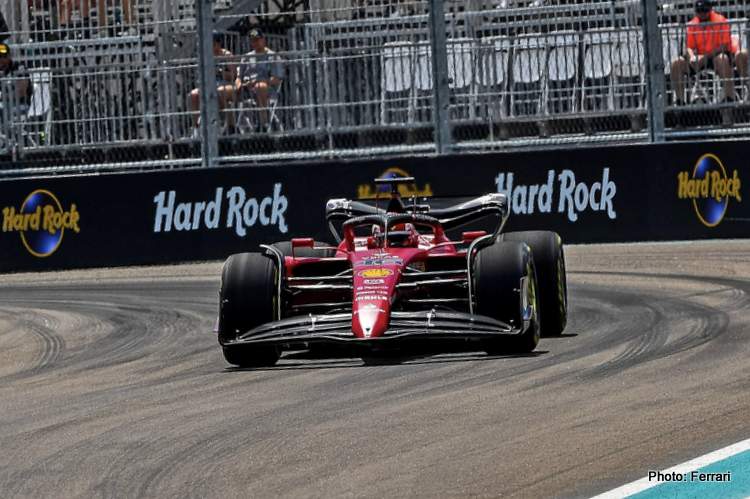 Formula 1 kicked off track action in the US with FP1 for the 2022 Miami Grand Prix, with Charles Leclerc going fastest around the Hard Rock Stadium, as the teams got their first taste of the new venue.

Charles Leclerc got the hang of the new Miami track quite quickly and set the fastest time of FP1 , with Mercedes’s George Russell closely behind him in second, while Max Verstappen took third.

Miami was buzzing with the buildup towards its first F1 race at the track built around the car park of the Miami Dolphin’s Hard Rock Stadium, which on paper seems to be an impressive and challenging track.

The track has 19 corners, three DRS zones, a new surface that has been designed to react like an older one and offer grip almost immediately.

Pending the actual racing to validate how good Miami International Autodrome is, one has to rely on the pundit’s opinions, with Grandprix247’s Sean Stevens giving his insight on the latest addition to the F1 calendar in his last edition of Parc Ferme.

Stevens sums things up saying the Miami race course “looks to be a very challenging track from the driver’s perspective”.

Martin Brundle also gave his view on the new track and said on Sky Sports F1: “I went around on a scooter on Wednesday, and it really impresses me.

“It’s quite a complex track and whilst it’s all enveloped around this Hard Rock Stadium… I think it’s really good! I think it’s a proper race track, that’s not been compromised.

“I really feel they’ve got a couple of interesting sections, some long straights on it and a range of corners. I think the drivers are going to be slightly wide-eyed in a couple of places,” Brundle concluded.

Away from the track talk, all eyes are on Mercedes, who said they will start bringing upgrades to their troublesome W13 for this race, and whether these upgrades will be any good, as the clock for the World Champions is ticking in their bid to fix their car, or admit it is a flawed concept and give up on it.

As the drivers got acclimatized to the new circuit, several had their moments with Max Verstappen, Charles Leclerc, and Yuki Tsunoda getting away with it.

Max skims the wall, while Charles and Yuki get in a spin 🔃#MiamiGP #F1 @f1miami pic.twitter.com/HTh041d38H

Mick Schumacher and Daniel Ricciardo had an incident at Turn 16, with race control announcing it will be investigated after the session, as Esteban Ocon was being investigated for unsafe release in the way of Mercedes George Russell.

With 35 minutes of the session gone, Valtteri Bottas binned his Alfa Romeo at Turn 7 bringing out the first Red Flag of the weekend, which was not ideal, as all teams needed every minute of running to get their cars set up for the race.

He’s out of the car, and on his way back to the paddock#MiamiGP #F1 pic.twitter.com/5Fa7hrs8J6

The session was resumed with 16 minutes remaining, after which the drivers head back out on the track, and Carlos Sainz almost immediately spun his F1-75 at Turn 4 while on a new set of Softs, puncturing his front right tyre, and was forced to switch to a set of Medium tyres, losing his chance of a hot lap.

How they finished the session

It would not be very smart to read into the time set during the first practice session of the Miami Grand Prix, as the teams and drivers were just getting started to learn feel their way around the car park track, with several drivers temporarily occupying the top spot as the session progressed.

Nevertheless, a decent F1 car is decent on every track, proven by Ferrari as Charles Leclerc took the top spot in FP1 with a lap time of 1:31.098.

George Russell took a surprise second in the updated Mercedes W13 – visually less “bouncy” – and was a mere 0.071s off the pace of Leclerc.

Reigning World Champion Max Verstappen was third for Red Bull, the Dutchman reportedly suffering from overheating problems on his RB18, and 0.179s off the pace.

Sergio Perez was fourth in the sister Red Bull 0.024s further down the road, with Pierre Gasly 0.197s behind the Mexican in fifth.

First Practice ✅ Max and Checo get our #MiamiGP weekend started with P3 and P4 in FP1 🏁 pic.twitter.com/fvzLlDStNP

Carlos Sainz was sixth in the #55 Ferrari 0.430s down on his teammate’s time, with Alex Albon placing his Williams in seventh 0.326s slower than the Spaniard.

Lewis Hamilton who was reportedly running a different setup than Russell took eighth 0.858s off the pace, as Kevin Magnussen showed strongly for Haas at the start of the team’s home grand prix, taking ninth albeit 1.461s too slow.

FP1 ends. 🏁 A solid start to the weekend, we’ll be back to give it even more in a few hours.#MiamiGP 🇺🇸 pic.twitter.com/fwB7MRSSH5 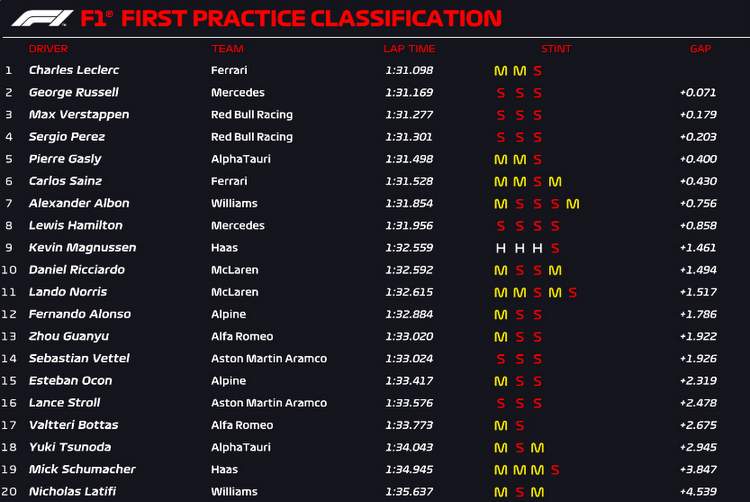