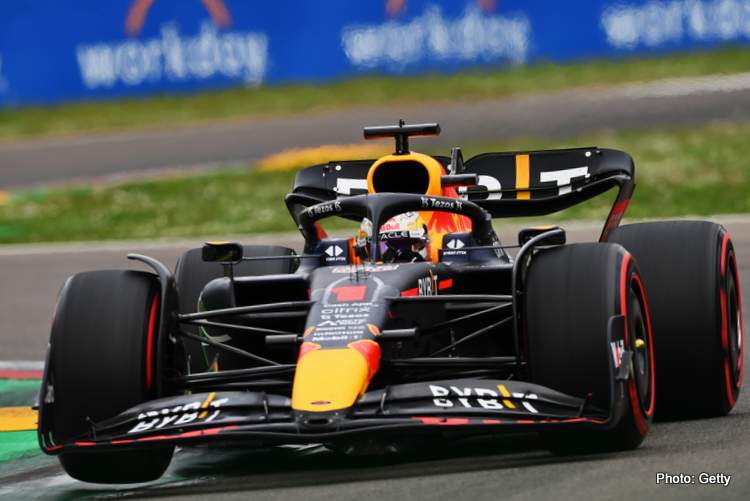 Max Verstappen beat Charles Leclerc in the Imola Sprint Race, with a sensational pass with one lap of the 21-lap event remaining, after a race-long chase.

The Dutchman remained calm after losing the lead to his rival with a bad start, and kept close to Leclerc, and saved his tyres for a last gasp attack which was successful with an overtake on the outside.

Sergio Perez took third, as Carlos Sainz recovered to take fourth behind the Mexican after starting from tenth, following his crash in qualifying on Friday.

Verstappen will thus start Sunday’s race from the top spot, and will be happy to have bagged eight points on Saturday as he looks to close the gap to his Ferrari rival.

Verstappen said after the Sprint Race: “My start was not very good and it took a while to try and put the pressure on.

“We were a bit better on our tyres at the end of the race so I could get into DRS and we had a good fight into turn 2.

“It was fast and pushing quite a bit,” the reigning Formula 1 World Champion concluded.

VERSTAPPEN GOES ROUND THE OUTSIDE AND TAKES THE LEAD!!!! 🤯#ImolaGP #F1 pic.twitter.com/KRL1IKs3X2

Charles Leclerc who seemed to be building the gap with Verstappen started to suffer from graining towards the end, which allowed the #1 Red Bull to catch up and overtake him with one lap to go only.

Leclerc reflected on his second place: “It’s still a front row start. We struggled with the tyres at the end, so we need to analyse that for tomorrow. We need to make sure that we’re ready.

“The pace was good until then, we started to have some draining on the front left and lost it towards the end. That’s life, we’ll go to work and come back stronger tomorrow,” he added.

Sergio Perez recovered from his seventh place to take third and six point on his way, which will put him in a great position to support his teammate in the fight with Leclerc.

Perez said of his race: “I think it was important to minimise qualifying from yesterday. With the red flags we didn’t put the lap together when it mattered.

“Today we managed to recover and we are in a position to be in the fight tomorrow. It would be ideal to get a 1-2 that would be great for Red Bull but maybe not for the Tifosi but we will try,” the 32-year-old concluded.

Medals for the top 3️⃣!

Behind the Red Bulls and Ferraris, Lando Norris took fifth place, as he was unable to keep his third position from the start, and was overhauled by Perez and Sainz.

Norris was followed by his teammate Daniel Ricciardo in the #3 McLaren in sixth place, which could be considered as a decent result for the Woking squad who might not have secured such a starting position in the race in a normal qualifying session.

Vatteri Bottas finished seventh bagging 2 points, and was followed by Kevin Magnussen in eighth, securing a top ten start for Sunday’s race and bagging the final point on offer from the Sprint Race.

Out of the points

Fernando Alonso was the first of the drivers unable to score any points, as he took ninth place having started from fifth, a big disappointment for the double F1 Champion who was unable to sustain the attacks from the chasing pack.

Mick Schumacher did well to finish tenth having started two places back, which will give him a chance to score points come Sunday, despite not scoring any from the Sprint Race.

George Russell recovered the positions he lost at the start to finish the Sprint Race in 11th, is starting position for the Grand Prix on Sunday, while Lewis Hamilton finished down in 14th having started 13th.

Still no signs of improvement for the eight-time World Champions, as the struggle continues, proving their FP2 pace a few hours before the sprint event was irrelevant.

A challenging #F1Sprint for us in Imola, but there’s a long race ahead, tomorrow 👊 pic.twitter.com/cMo6VuDgTf

Yuki Tsunoda was 11th for AlphaTauri, as Pierre Gasly failed to recover from his first-lap clash with Zhou Guanyu, and had to settle for 17th.

Sebastian Vettel fought faster cars behind him valiantly in his sluggish Aston Martin, but was down in 13th by the time the chequered flag was waved having started from ninth.

Vettel’s teammate Lance Stroll finished 15th in the other Aston Martin, ahead of Esteban Ocon in 16th for Alpine.

The Williams pair Alexander Albon and Nicholas Latifi were 18th and 19th respectively, with Zhou Guanyu being classified as a DNF.

How the Imola Sprint Race developed

All twenty drivers opted to run the 21-lap Sprint Race on the Soft tyres except for the Haas pair, Kevin Magnussen and Mick Schumacher, as well as Williams’ Nicholas Latifi who opted for the Medium compound.

Fernando Alonso had a scare as he remained stationary at the start of the formation lap, but was soon on his way, overtaking the cars to retain his fifth grid position.

Charles Leclerc took the lead from Max Verstappen as the start, with the Dutchman complaining about gear sync issues, a chronic issue for the energy drinks outfit.

However, the Safety Car was soon out with the first lap not yet complete after Alfa Romeo’s Zhou Guanyu tangled with AlphaTauri’s Pierre Gasly at Piratella, the Chinese rookie spinning out of the race, while the Frenchman pitted for fresh tyres after damaging his front-right wheel in the contact.

Guanyu Zhou is OUT of the race

The Safety Car was back in the pits with 17 laps of racing remaining, which definitely benefitted the cars on Soft tyres, and Charles Leclerc kept his lead with Verstappen in his mirrors.

By lap seven, and with the aid of DRS, Carlos Sainz was able to overtake compatriot Fernando Alonso, as Sergio Perez turned the heat on Kevin Magnussen in the Haas, the latter warned for weaving with a Black and White flag, but the Mexican was through by lap eight.

Kevin Magnussen who was on the slower Medium tyres fell prey to the chasing pack and was overtaken by Daniel Ricciardo and then Carlos Sainz, as Perez overtook Lando Norris into third.

Up front, Leclerc was building the gap to Verstappen, keeping him at arms length and out of the DRS range, with the Red Bull ace seemingly having no answer to the #16 Ferrari’s pace.

By lap 14, Sainz was past the the McLaren of Ricciardo into fifth an set off chasing the sister McLaren of Norris over five seconds up the road.

By lap 15, Fernando Alonso, Valtteri Bottas, and Magnussen were locked in a DRS train lead by the Dane, whose teammate Mick Schumacher was up to tenth relegating the Aston Martin of Sebastian Vettel into 11th.

Into lap 16, Bottas overtook Alonso, but the big news was Verstappen closing the gap to Leclerc to less than one second, and set out hunting the Monegasque, with five laps remaining.

Verstappen finally did the business and overtook Leclerc on lap 20 at Turn three, as Sainz overtook Norris to take fourth. 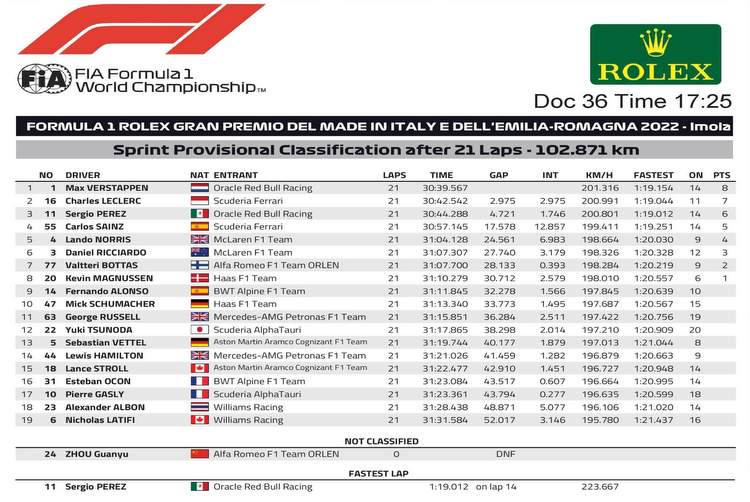