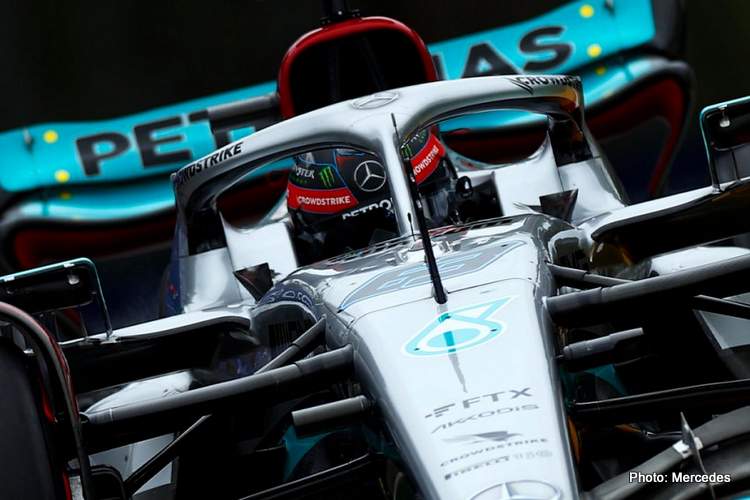 George Russell surprised all by ending fastest in FP2 for the 2022 Emilia Romagna Grand Prix, as Mercedes may have found a turn of pace in dry conditions around Imola.

However, Russell’s first place should be taken with a pinch of salt, as all the teams were focused on longer runs rather than headline times in preparation for the Sprint Race later today.

Sergio Perez was second in the Red Bull followed by Charles Leclerc in third for Ferrari.

FP2 at Imola took place in dry conditions, contrary to those that prevailed over FP1 and Qualifying on Friday, and it was the final chance for teams and drivers to dial in their machinery ahead of the first Sprint Race of the 2022 Formula 1 season on Saturday afternoon.

With the shortened practice times due to having the Sprint Race this weekend, setting up the cars proved to be a challenge, with the rain on Friday throwing a curveball at all the teams, especially as it was the first time the new generation of cars would be tested in proper wet track conditions.

Qualifying was a tricky matter on Friday, with multiple Red Flags marring the session, and the mixed wet conditions (drying then wet again) spiced up the show and mixed the natural order of things a bit, evident by an Aston Martin reaching Q3.

However, it was Max Verstappen who went fastest by the end of qualifying, ahead of a disappointed Charles Leclerc, which makes it more interesting to see how the pair get on in the dry.

The session started with news from McLaren that the team was investigating an issue on Daniel Ricciardo’s MCL36, as Alfa Romeo’s Valtteri Bottas remained out of his C42 as the team was still working on it with over 15 minutes into the session.

The team are investigating an issue on Daniel’s car which will delay his start to FP2. We hope to resolve the issue and get the car out before the end of the session.#ImolaGP 🇮🇹

Bottas’ issue seemed to be related to his stoppage on track on Friday during qualifying, one of the instants that caused a Red flag during the session. The problem reportedly was related to the exhaust on the car, which is being replaced, while the power unit will not be affected.

Neither Ricciardo nor Bottas could take part in the session.

Halfway through the session, Lando Norris returned to the pits with brake problems on his car as McLaren started working on the #4 Papaya car, only to emerge in the dying moments of the session.

A very bad start for the Woking squad’s Saturday at Imola.

How the drivers finished FP2

Russell’s session-topping time was 1:19.457 and only 0.081s faster than Perez’s time in the Red Bull, but almost three tenths faster than Leclerc in third.

Fourth best was Lewis Hamilton, the seven-time F1 Champion over half a second slower than his teammate in the sister Mercedes. But it would be risky to assume that Mercedes have made a breakthrough after their miserable Friday in Imola.

Solid session for George and Lewis! Next up, the Sprint! 👊 pic.twitter.com/RURDdCOhtp

Fernando Alonso went fifth fastest for Alpine, confirming his strong form around the Italian venue with a best time of 1:20.714.

Carlos Sainz was sixth fastest in the repaired F1-75, after his shunt during qualifying on Friday 0.801s off the pace, with Max Verstappen a further 0.113 down the road in seventh.

AlphaTauri’s Yuki Tsunoda was eighth fastest with a lap time of 1:20.381 chased by his teammate Pierre Gasly in ninth only 0.058s separating the pair.

The only Alfa Romeo car featuring during the session was that of Zhou Guanyu, and was good enough for tenth with a 1:20.498.

Not all cars that featured in the top ten after Friday’s qualifying could not repeat the feat in the dry conditions under which FP2 was conducted, namely Sebastian Vettel for Aston Martin, and the Haas’ Kevin Magnussen, the German in 15th, as the Dane was 12th fastest. 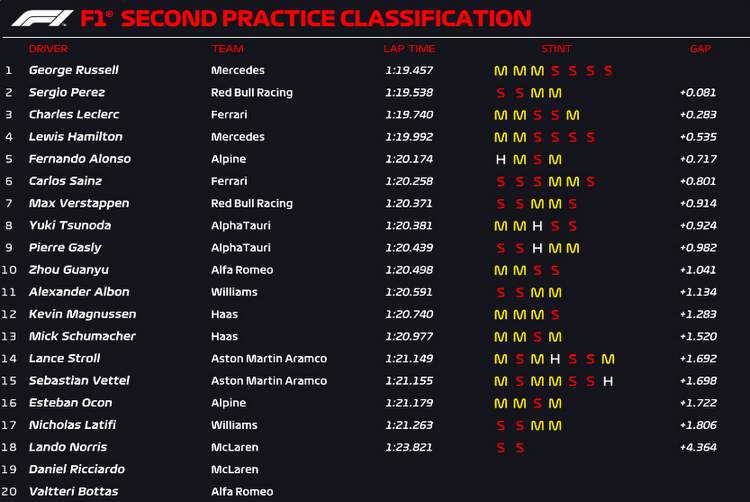