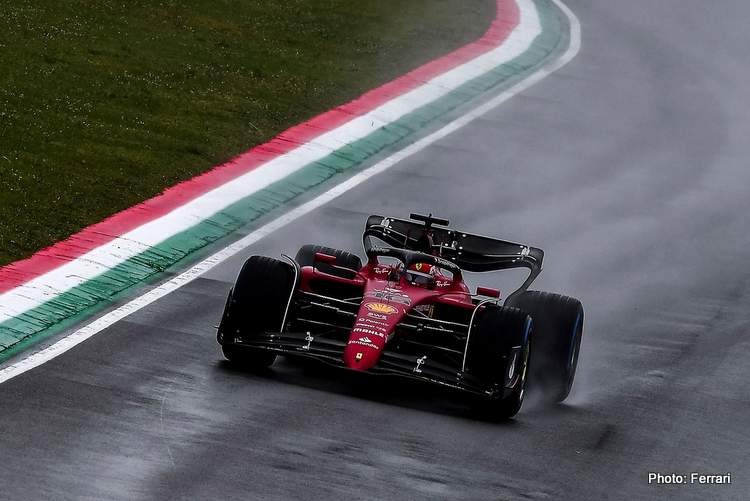 Ferrari sent a clear message of intent to all their rivals on a wet Imola track, as they hit the ground running, going fastest in FP1, with Charles Leclerc leading Carlos Sainz by 0.887s, the Monegasque surviving multiple spins during the session.

Max Verstappen was third for Red Bull 1.465s off the pace, as Valtteri Bottas went off at Turn 11 after the session ended.

With the first of this season’s three sprint races taking place at Imola this weekend, having one practice session to set the cars up before qualifying on Friday was always going to be a challenge for all the teams, especially with the new ground-effect cars, that are yet to be run in proper wet weather, except for the artificial wet testing session in Barcelona at the start of the season.

Red Bull team principal spoke of the track conditions, and said to Sky Sports F1: “It’s pretty tricky out there, and of course it’s an important session – the only session before qualifying.”

“It’s an important weekend for us, there’s a lot of points available and we’ve got to capitalise,” he added. “We can’t afford for the gap to grow again to Ferrari so we need to start eroding it.”

The rain stopped by the time the session started, but the track was properly wet with the drivers heading out on the full wet tyres.

The big news of the weekend was Carlos Sainz signing a two-year contract extension with Ferrari, which would see him racing in Red up until the end of the 2024 season, which should ease the pressure on the Spaniard who is yet to get on top of the handling of his F1-75, having suffered a difficult weekend in Melbourne.

However Ferrari have announced ahead of FP1, that the #55 Red Car will have a new power unit bolted into it, as a precautionary measure.

Carlos’ engine has been changed as a precaution following the impact in Australia as we do not want to take any risks with the Sprint weekend format.#essereFerrari #ImolaGP pic.twitter.com/kHxpochNPH

Being the first of the European races, updates are expected to start making their way to the 2022 F1 cars, but while Ferrari have not added any upgrades to their F1-75, Red Bull have brought a new winglet and floor splitter to their RB18 that also has some revisions to the rear brake cooling.

Mercedes, who are yet to sort out their troublesome W13, have brought a new diffuser to Imola, as well as some updates to the side-pods. Will they improve?

Alpine also brought a revised floor this weekend, but have not been immune from reliability problems themselves, and announced that Esteban Ocon will have a new power unit fitted to his A522 ahead of the first session at Imola, as his teammate Fernando Alonso had a new PU of his own in Melbourne after failing to finish in Saudi Arabia due to engine trouble.

Alonso is on his third PU from the allowed allocation, with penalties being a sure thing should any further changes be required. Are Alpine on the backfoot already?

Alpine CEO Laurent Rossi said at the start of the season that he has urged his team to be bold with their approach, and that he would prefer to start with a powerful PU even of reliability would be a problem.

As a precaution, the team will fit a new power unit for Esteban at this weekend’s Grand Prix. This will be his second of three allocated power units for the season, therefore not incurring a penalty.#ImolaGP

Spins and off-road excursions were aplenty with Charles Leclerc, Nicholas Latifi, Carlos Sainz, Lando Norris, Kevin Magnussen, and Lewis Hamilton all having some moments out on track, but nothing serious though.

Halfway into the session, Aston Martin’s Sebastian Vettel was the first to sample the intermediate tyres as the track evolved, with others following suit, except for Mercedes who soldiered on with full wets.

Lando Norris brought out the Red flag with five minutes remaining in the session as he beached his McLaren at Turn 12, but managed to get running again.

The Red flag did not last long.

Lando Norris finds himself beached in the gravel at Turn 12 ❌

Luckily the McLaren driver is able to drive out and return to the pits #ImolaGP #F1 pic.twitter.com/Ua7YLtXmYr

How the drivers finished

As mentioned, no one had an answer to the speed of Ferrari as Leclerc’s best time was 1:29.402 remained unbeaten, followed by Sainz over eight tenths of the pace of his teammate.

Verstappen was only good enough for third on the day almost 1.5s slower than the #16 Ferrari, and was followed by Kevin Magnussen in fourth for the Haas albeit over three seconds off the pace of the leader.

Mick Schumacher was a further 0.549s behind his teammate in fifth, as Sergio Perez took sixth for Red Bull 0.024s further adrift.

Fernando Alonso was seventh for Alpine 3.758s off the top time, and was followed by Sebastian Vettel in eighth for Aston Martin, the German two tenths behind the Spaniard. Can Vettel replicate this performance in qualifying?

Yuki Tsunoda took ninth in the Alpha Tauri with a 1:33.611 as Mercedes’ George Russell rounded off the top ten almost five seconds too slow.

The McLaren duo of Lando Norris and Daniel Ricciardo were 14th and 15th respectively, as seven-time World Champion Lewis Hamilton was down in 18th place. 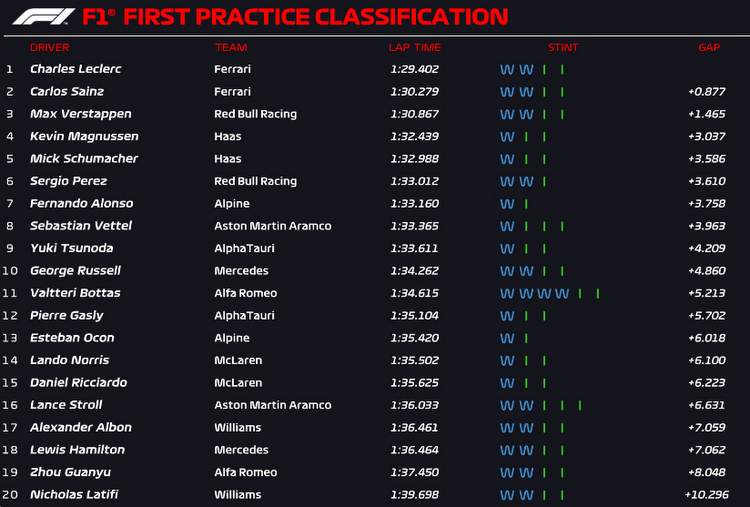