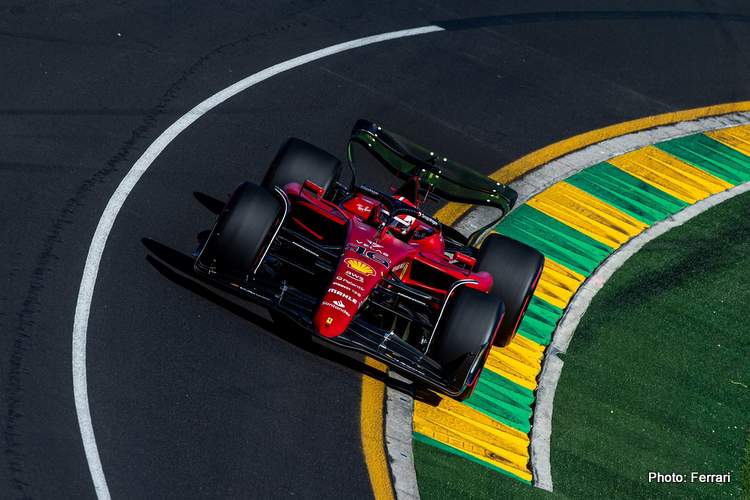 As usual, the second free practice session was held in conditions that mimic those of qualifying and the race, and while Ferrari lead a 1-2 in FP1 with Carloz Sainz ahead of Charles Leclerc, the Monegasque set things right in the afternoon session, going fastest of all, as Verstappen was second, with Sainz settling for third.

FP1 in all honesty did not bring anything new, as the pecking order remained unchanged with Red Bull and Ferrari leading the field as the Blues and Reds hogged the four top spots, their order being irrelevant being the first track session of the weekend, but their edge remains over the field and especially eight-time Constructors’ Champions Mercedes.

Some notes from the session

As a reminder, the first session ended with Sebastian Vettel riding a scooter back to the pits after his Aston Martin broke down, which at the moment might be the faster means for the German to go around Albert Park considering the state of performance of his AMR22.

However, the four-time champion might be facing a risk of getting penalized for entering the track five minutes after the session was concluded.

Under investigation but no guarantee he’ll get a penalty (if he does, likely financial.) 5 minute window after sessions you can’t enter track. One exception is with permission from a marshal.

Not FIA being fun police. It’s FIA being safety police, which is literally their job. https://t.co/YzxhpLW3Lf

Aston Martin gave an update on the situation with Vettel’s car, and confirmed that they will be changing the power unit on the #5 Green car, with no penalties being incurred. Vettel however, did not partake in FP2.

UPDATE: Sadly, despite the team’s best efforts, Sebastian’s car will not be ready to run in #FP2.#F1 #AusGP

At some point Max Verstappen complained to his team about his RB18’s handling saying: “I am still having the same issues. It is incredibly difficult at high speed. I can’t turn the car in.”

Red Bull responded by doing some changes to the rear suspension on the Dutchman’s car.

Lance Stroll brought out the Red Flag with less than 15 minutes of the session remaining, as a part of AMR22 got detached, as the marshals worked on retrieving it. The session was resumed shortly after that with only eight minutes remaining on the clock.

It was noticeable that many drivers went on off-track excursions during the afternoon practice session around the revamped Albert Park as they got to grips with their new rides.

How the drivers stood after FP2

Leclerc was in much better form in the afternoon session, and the stopwatch confirmed that as he registered a time of 1:18.978 that was 0.245s clear of Max Verstappen in second place.

Carlos Sainz was 0.153s further down the road in third place having gone fastest in the morning session, and was ahead of his compatriot Fernando Alonso who took an excellent fourth only 0.161s off the pace of Sainz.

Alonso briefly took the fastest time of the session before being usurped by Leclerc.

Sergio Perez was only good for fifth for Red Bull and almost seven tenths off the pace, as Esteban Ocon took sixth in the sister Alpine, 0.184s adrift from the Mexican.

Valtteri Bottas continued his good run of form and put his Alfa Romeo in seventh place but over a second off the pace, as Lando Norris was able to take eighth in the MCL36, a mere 0.045s off the Finn’s time.

Pierre Gasly returned to the top 10 in FP2 and took ninth for AlphaTauri with a 1:20.142 as Daniel Ricciardo rounded up the top ten 0.061s down on Gasly.

Not a bad day for the Woking outfit, as both their cars made top ten appearance both in FP1 and FP2, while Mercedes slipped down the order in the afternoon, after Lewis Hamilton’s fifth place in the morning run, the Briton only able to muster 13th in FP2, with teammate George Russell 11th. 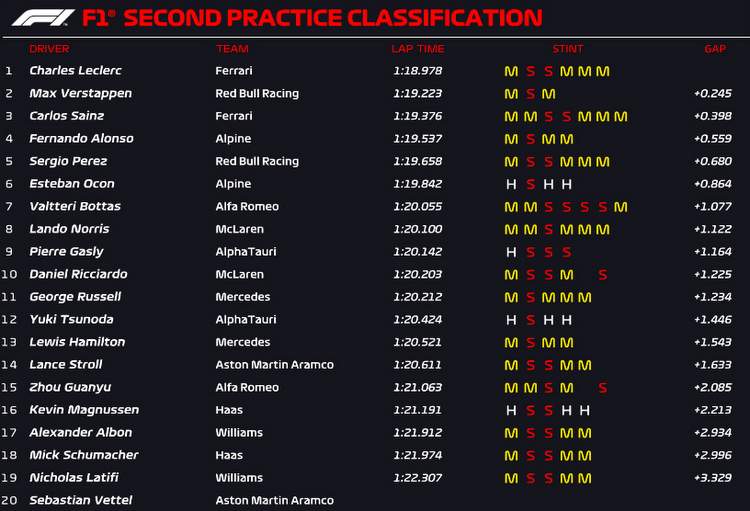