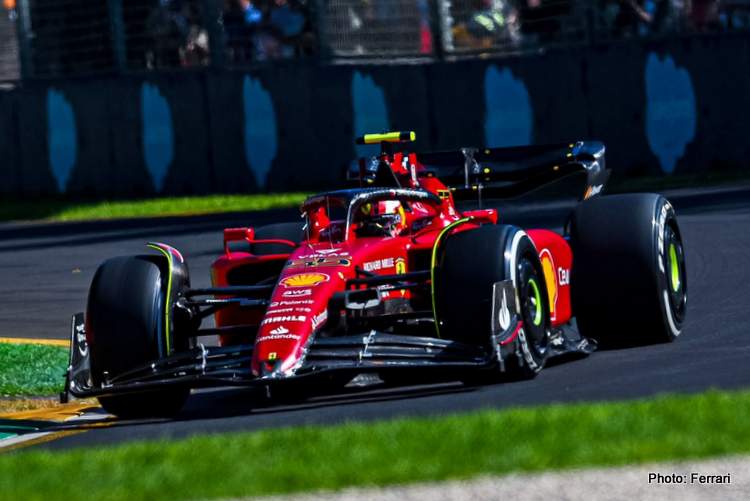 Formula 1 returned to Melbourne for the 2022 Australian Grand Prix after an absence of two seasons, and FP1 kicked off with Carlos Sainz going fastest for Ferrari.

The Spaniard had a good start for his race weekend in Melbourne, as he was the fastest of the Ferrari pair, going fastest in the first free practice session and was 0.571s faster than Charles Leclerc in second. Sergio Perez was third.

There was plenty to look forward to as the F1 circus landed Down Under for the first time since 2019, as it was a different Formula 1 that visited Albert Park in 2019, with the new-for-2022 ground-effect cars.

The circuit has also changed, losing a couple of corners, while other corners being revised to promote more racing and overtaking, so it would be interesting to see how the changes affect the racing.

Ferrari and Red Bull have emerged as the contenders for this year’s Championship if Bahrain and Saudi Arabia are anything to go by, and it would be interesting to see which of the two has the edge in Melbourne, as eyes will also be on Mercedes with their troublesome car, the W13, and whether the World Champions can be any better.

Red Bull brought a new front wing for their RB18 while Ferrari have a new diffuser for their F1-75, while Mercedes who one might expect to be working hard in fixing their W13 did not bring any updates.

Carlos Sainz said to the media on Thursday when asked about Ferrari’s battle with Red Bull and the performance gaps: “Until we have a big upgrade it will stay like this.

“It shows that until one of the teams bring something new in their package the gaps will stay like it is,” he added.

Aston Martin’s Sebastian Vettel returned to the cockpit of the AMR22 after recovering from COVID, a welcome sight to the F1 community to see the likable German back, be he will have his work cut out, as his team is suffering with their 2022 car, and the quadruple F1 Champion’s feedback and experience would have been sorely missed in the two opening races that he missed.

Carlos Sainz took some time to get out of the garage as Ferrari sorted out a problem with his car related to the F1-75’s rear ride height, but was soon out on track.

Sergio Perez’s car lost part of its underfloor around 20 minutes into the session causing a brief Red Flag till the part was retrieved.

We have a brief stoppage while marshals recover a piece of Sergio Perez’s car on the racing line#AusGP #F1 pic.twitter.com/FpLPxMOUs8

With Haas coming to Australia with no spare chassis thanks to Mick Schumacher’s shunt in Jeddah, it was crucial that the American team’s drivers take it easy around Albert Park and not sustain serious car damage, but Kevin Magnussen – whose participation in FP1 was reportedly in doubt as he wasn’t feeling well – gave his team a scare as he went on an off-track excursion with 24 minutes remaining from the session. No damage done there.

Fernando Alonsi also had a moment in sector 3, spinning his Alpine at Turn 15, bringing out a brief Yellow flag, but the Spaniard got going after that.

Alonso gets crossed up in the final sector#AusGP #F1 pic.twitter.com/WgkZ8rKfnI

Asked by the media if Alpine had updates on their A522, the Spaniard said on Thursday: “I don’t think it is a case.

“We don’t have a car different from Jeddah. We will try to be working on the performance. We are looking forward to close the gap. We need to keep working.

“We will find something much bigger. This is what the teams are trying to find,” Alonso revealed.

Charles Leclerc also took his F1-75 for a drive down the gravel trap at Turn 1, most probably because of cold tyres, right after doing a practice start.

With 14 minutes remaining from FP1, Sebastian Vettel parked his AMR22 on the side of the track reporting an engine problem at Turn 12, with smoke coming out of the rear of the Green car, as the German went on to perform one of his many skills other than being an F1 driver – a fire marshal in this instance.

Vettel’s break down brought out the Red Flag as the stricken Aston Martin was removed from the track. The track was Green again with 10 minutes of running still available.

Fireman Seb is quickly on the scene 👨‍🚒🧯#AusGP #F1 pic.twitter.com/eGiOUX98zf

How did they finish?

As mentioned, Sainz was the faster Ferrari in FP1, and was over half  a second faster the teammate Leclerc, who did not seem to be in sync with his car on the day, and was only good for second.

Third went to Sergio Perez in the Red Bull as the Mexican was almost six tenths off the pace of Sainz, and was followed by teammate Max Verstappen in fourth, 0.277s further adrift.

Lando Norris was an excellent fifth for the troubled McLaren team albeit over a second off the pace of the leading car. Could that be the light at the end of the tunnel for Woking?

It was Esteban Ocon who took sixth place in the Alpine clocking a best time of 1:21.004, with seven-time World Champion Lewis Hamilton in seventh 0.023s slower than the Frenchman.

Daniel Ricciardo was a welcome sight for his home fans in the top ten, as the Honey Badger was eighth fastest in the other McLaren but 1.349s off the benchmark time.

Fernando Alonso made sure two Alpines were in the top ten as he took ninth 1.423s off the top time, and was followed by Valtteri Bottas in the #77 Alfa Romeo in tenth.

Notably, George Russell was 12th fastest in the Mercedes, while returnee Sebastian Vettel was only good for 13th, as he suffered a car breakdown towards the end of the session. Not a good re-start for the German. 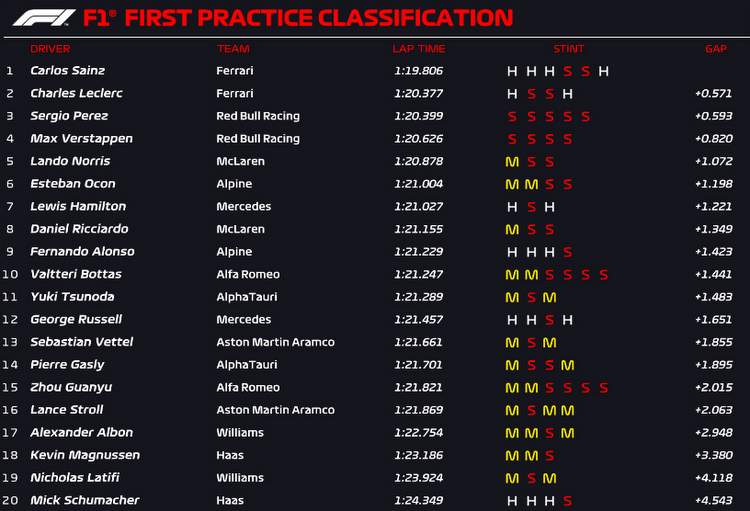