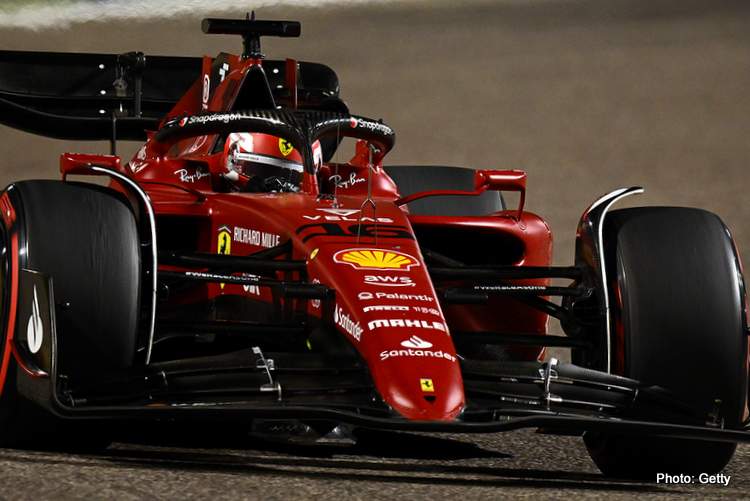 Charles Leclerc went fastest at the end of the second free practice session for the 2022 Saudi Arabian Grand Prix, but had clipped the wall with his left front tyre damaging his suspension and bringing his running to an early conclusion.

As was the case with the Bahrain Grand Prix, the afternoon practice session, FP2, for the 2022 Saudi Grand Prix was conducted in more representative conditions than those of FP1, as the qualifying and the race will take place at similar times on Saturday and Sunday.

Tense moments ahead of FP2

The second practice was held under some tense conditions as a fire erupted in an oil depot in Jeddah, as per media reports and the fire was caused by “Yemen’s Houthis rebels acknowledging they had launched a series of attacks on the kingdom” according to Sky Sports F1.

Worth noting that Max Verstappen reported towards the end of FP1 a burning smell, as his team reported it was not from the car, so most probably that was related to the fire.

The afternoon practice session was delayed for 15 minutes as the teams had a meeting, attended by the team principals and drivers, to reportedly discuss the Jeddah fire, as F1 CEO Stefano Domenicali briefed the attendees on the situation.

On to racing, where it seems the delay played Haas’ benefit as it gave the team time to finish repairing the VF22 that suffered a hydraulic leak during FP1.

Lewis Hamilton reported that he was not happy with his seat and had it replaced with the spare seat that provided a higher seating position.

Halfway through the session, Kevin Magnussen’s troubles continued, as the Dane reported engine problems over the team radio, and stopped the car shortly after that on the side of the track prompting a Virtual Safety Car for a few minutes.

With almost 20 minutes remaining Charles Leclerc hit the barrier between Turns 6 and 7, with his left wheel, with damage caused, after which the Monegasque limped back to the pits in the stricken F1-75.

Leclerc hits the wall with his left wheel & has been forced to box 😬 pic.twitter.com/ZWTfznd2xF

That ended Leclerc’s running for the day, while his teammate, Carlos Sainz, clipped the wall at Turn 13 minutes earlier as well, ending his session as well. The Spaniard earlier during the session, complained about considerable bouncing from the car.

Yuki Tsunoda faced a power unit in the dying seconds of the session, his team instructing him to turn it off and park, which he duly did, bringing out the yellow flags, but without any effect on the session that was done by that time.

How they finished the second practice session

Charles Leclerc’s session-topping time clocked early in the session before he binned his car, his best effort being 1:30.074.

Again, Max Verstappen was chasing in the Red Bull and was second fastest 0.140s off the pace of his rival, and was followed by Carlos Sainz in the other F1-75 the Spaniard 0.106s further adrift.

Sergio Perez was fourth fastest 0.286s off the pace, and was followed by Lewis Hamilton in the Mercedes in fifth, the seven-time World Champion 0.439s shy of the top time of Leclerc.

George Russell followed his teammate in sixth and was almost six tenth off the pace, with Lando Norris making it into the top ten this time around in seventh and 0.071s further behind his compatriot.

That’s our Friday in Jeddah ✅ A solid FP2. Team will be hard at work overnight to keep fine-tuning W13. 💪 pic.twitter.com/DfrEq1FSYE

Esteban Ocon took eighth in the Alpine 0.686s down on the top time, with Valtteri Bottas in ninth in the afternoon session, the Finn clocking a 1:30.832.

Yuki Tsunoda rounded off the top ten 0.812s too slow than the best. 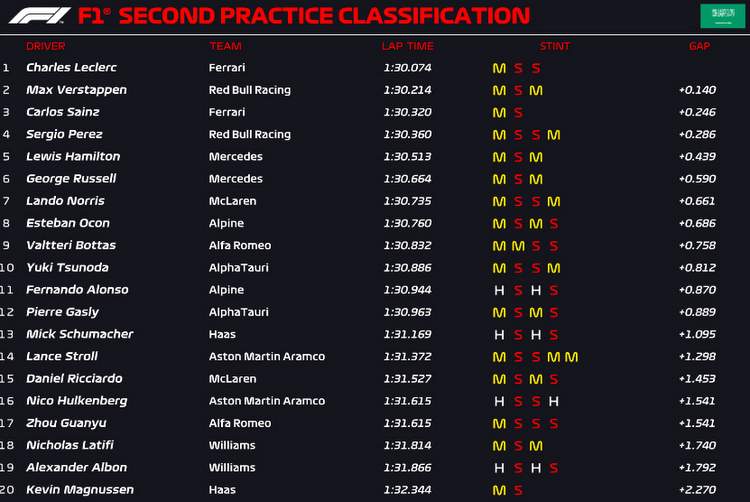