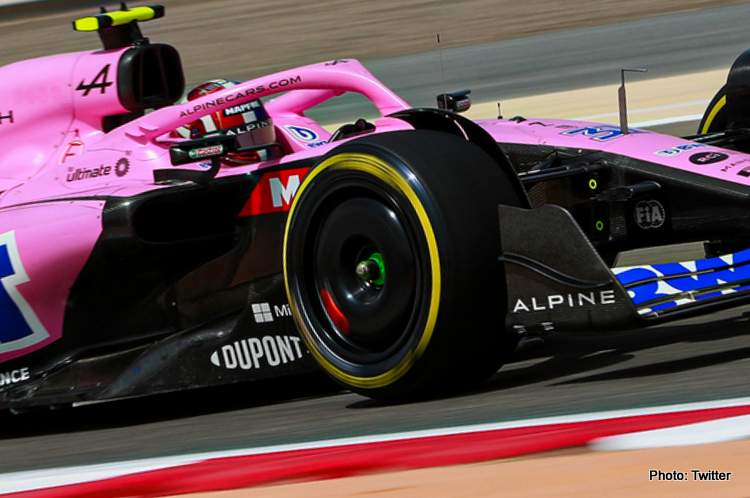 Formula 1 resumed testing in Bahrain on Friday for Day 2 of the official pre-season test of the 2022 F1 season, with Alpine’s Esteban Ocon going fastest.

The frenchman set a time of 1:34.276, and was followed by Ferrari’s Charles Leclerc in second, the Monegasque only 0.09s off the pace.

Third was the 2021 F1 Champion Max Verstappen for Red Bull and was followed by Aston Martin’s Sebastian Vettel in fourth, as Lando Norris took fifth for McLaren.

Sixth went to Yuki Tsunoda on the AlphaTauri, and seventh was for Alfa Romeo’s Valtteri Bottas, who was followed by Mick Schumacher in the Haas in eighth.

Mercedes’ George Russell was ninth in the radical W13, the World Champions either doing their best sandbagging impression or still struggling to dial in their upgraded car. Time will tell.

Nicholas Latifi was tenth fastest, the Canadian spinning out of the test as his Williams’ rear axle caught fire and failed.

The major absentee from Day 2 of  Formula 1 running at Bahrain was McLaren’s Daniel Ricciardo as the Australian – for a second day in a row – was deemed unfit to drive with teammate Lando Norris filling in for him at the wheel of the MCL36.

Another noticeable change was Alpine running the pre-dominantly pink livery on the second testing day, which they announced with at the launch of the A522 as a special livery to be used in the first two races of the season, the Bahrain Grand Prix and the Saudi Arabian Grand Prix.

😍 @AlpineF1Team treating us in testing with these liveries 😍

Which do you prefer? 🤔 pic.twitter.com/kRGeacHEFW

Something worth pointing out, that reliability run general took a hit at the Bahrain test, with several teams facing problems, more frequent that what was witnessed at Barcelona. One wonders if it is down to the higher temperatures of Bahrain, or are the teams pushing their cars harder in the second test?

Reigning F1 World Champion Max Verstappen was back at the wheel of the Red Bull RB18, taking over from Sergio Perez who ran the full first day, whereas George Russell kicked off the AM session for Mercedes.

As mentioned, Lando Norris was till covering for the unwell Daniel Ricciardo at McLaren, with Esteban Ocon scheduled for a full day of running at Alpine.

Charles Leclerc was the first the Ferrari drivers to take the F1-75 out of the garage, but will hand it over to Carlos Sainz after the lunch break, as Sebastian Vettel started off the test for Aston Martin before Lance Stroll rounds of their Friday.

Yuki Tsunoda and Nicholas Latifi will be on full day driving duty for AlphaTauri and Williams respectively, as Alfa Romeo opted to split the Friday running between Valtteri Bottas and Guanyu Zhou, the Chinese rookie driving first.

Finally, for Haas, Mick Schumacher kicked off the team’s Friday test, with the returning Kevin Magnussen set to make his first appearance in the afternoon.

Worth noting, is that Haas will run an extra hour in the afternoon, in the team’s effort to compensate for the lost running time on Day 1’s morning session, due to their cargo arriving late in Bahrain.

After being unable to take part in yesterday’s first session due to earlier freight delays, we have been granted an extra four hours of running, spread across the next two days.#HaasF1 #F1Testing pic.twitter.com/NUAWoWKh0r

McLaren’s first day of running was horrendous, with the MCL36 suffering from brake issues all day, confining to the team garage for extended durations of time, as Lando Norris could not accumulate more than 49 laps of running by the end of the day.

The second day did not start any better, as Norris was back into the garage after six laps of running, as the team starting working on the recurring brake problem, evidently not sorted from Thursday.

Williams hit trouble and so does Aston Martin

One hour and 45 minutes into the test, the rear of Latifi’s C42 caught fire, as it seemed the flames were coming our of the rear brakes, which caused a rear axle failure sending the Canadian into a spin.

Consequently the session was red-flagged as the marshals attempted to extinguish the fire and send the stricken Williams back to the pits.

The session was resumed a little over 30 minutes laters, but that meant the end of running for Williams, that later tweeted a comment on the problem they encountered.

From initial investigations, it appears that the issue that caused the fire was quite minor, but became visibly quite dramatic. It is not as severe as the video footage might suggest, but there is fire damage to the rear of the car that the team need to repair. (1/2) pic.twitter.com/xRJVcJSwbW

Alex Albon was speaking of his impressions from the new cars and said: “They are different, honestly Barcelona, they didn’t feel as different as they do in Bahrain. It’s tricky to drive, you see everyone locking up, making mistakes. But it’s exciting, it makes it feel like the driver has to really drive around the issues.”

With 50 minutes to go, Sebastian Vettel’s AMR22 stopped on the side of the track, but no Red Flag was required as it seemed the German had parked his car in a safe location on the track.

#SV5 stops on track. Seb is out of the car and the team are on their way to collect the car. #F1Testing

Aston Martin however had Vettel back out on track in no time, as they confirmed a problem with the rear right tyre. But the team could not enjoy much running as, with less than 15 minutes to go, the Red Flag was raised again as part of an FIA software systems check, to test the restart procedures.

All F1 cars then left the pitlane, and then went on to line up on the grid to have a standing start as part of the FIA’s restart protocol test, running a “start aborted” scenario with an “extra formation lap”.

Valtteri Bottas stopped on track in the middle of the practice start, bringing up the final Red Flag of the session, bringing the morning session to an end a little over two minutes away from the official time.

Bottas stops on track and that will see us to the end of the first session ⏱#F1Testing #F1 pic.twitter.com/ssW2p2orgJ 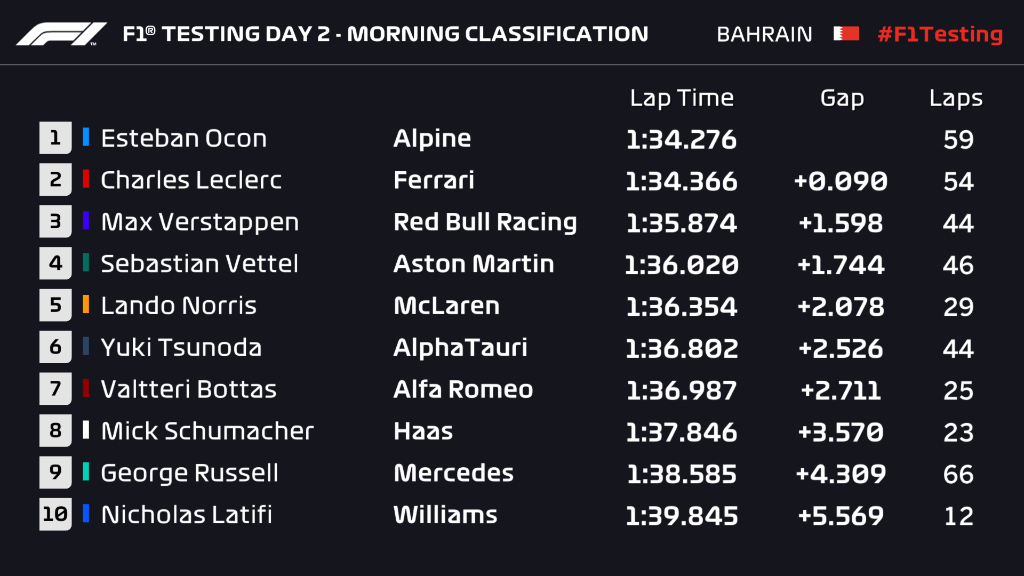