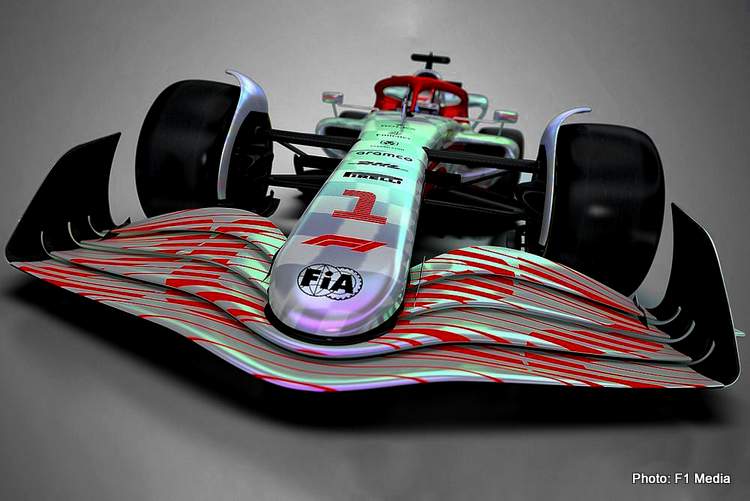 Much has been said about the all-new 2022 Formula 1 regulations from a technical perspective: more underfloor downforce, less from the wings, reduced dirty air behind the car etc. But, little has been written on how it will impact drivability.

This is surprising since these new era cars represent an abrupt departure from the design philosophy of previous years. This kind of speculation is not without risk of course. We don‘t know how the different teams have interpreted the rules.

This means I may have to put salt and pepper on a printed copy of this article and eat it at a later date. So let’s take a look at how these changes may challenge the drivers “talent bag’s”

This is a big difference that will significantly affect the driving characteristic of the car. In basic road car terms, you now have a “low profile” tire compared to the old 13” “high profile” wheels. Decreasing the sidewall height of the tires will reduce the fluctuation in temperature experienced with the old dimensions.

Providing a more stable performance and predictable grip. The drivers should also find a sharper response when “turning in” to a corner with the reduced wall flex. However, there is a flip side. With increased stiffness comes a reduction in overall feel.

This in turn increases the possibility of the tire “grip” being easily overwhelmed if not driven sensitively. We can expect some drivers to be complaining of mid-corner understeer and/or oversteer depending on how they are driving the car.

This will probably provide an appreciable reduction in performance for 2 laps rather than ¾ of the out lap. The impact of this is fairly obvious. Coming back onto the track just in front of your rival will not cut it anymore.

With the car now handling like a shopping trolley compared to the driver behind, holding onto the position will require real “seat of the pants” driving skills. Keeping the tires anywhere close to their “window” under the Safety Car will also present a challenge.

We can expect the restarts to be a bit more lively in 2022 than in previous years thanks to the quirks that are brought about by the new set of Formula 1 regulations.

The main purpose of the new design is to tidy up the aero “outwash” (i.e. Reduce the “dirty” air being dumped on the car behind) while providing a more consistent downforce when closely following another driver.

More the former than the latter I think. The downforce generated by this new wing will be significantly reduced compared to previous incarnations, adding to the potential “washing out” feeling at the front end of the car whilst cornering.

Consideration was given to dumping the front wing entirely which would suggest its relevance within the aero package as a whole is small. However, the Teams baulked at this idea – I guess because they would lose sponsorship revenue if this prime space disappeared.

This cheeky little number looks very pretty at the rear end. Its curves are designed to mop up as much as possible the dirty air trailing off the back of the car. Moving it upwards and away from the one following closely behind in what is known as a “mushroom” wake.

However, the engine cowling is “free” in design terms, and with no restrictions here, I’m sure at least one of the enterprising teams will have come up with a tweak to stall the “mushroom” and dump it back where it belongs i.e.

All over the front wing of the closely following competitor. As in “if I can’t get more downforce, then I’ll reduce yours” type of thing.

Banned in the early 1980s on safety grounds, sculptured under floors return rehabilitated. In the past, things could get nasty if you hit a bump, kerb or anything that critically raised the ride height of the car at high speed. Normally resulting in an immediate loss of “suction” and the necessary grip to make the corner.

In its formative days, the designs were more by “hunch” than fact. But in this modern era, we are reliably informed that aerodynamic knowledge will minimize the problems of the past. However, I’m a little suspicious of this. Drivers might find mounting kerbs may still not be a plan, particularly in corners where the ground effect is pivotal to keeping them on the track.

Not really a new “thing” as they have been around for years, except that F1 didn’t use them. Instead, they relied on a hydraulic system to control stiffness.

Spotting a theme yet? This along with “inerters” are now in the racing component rubbish bin.

The hydraulic system is more accurate in its calibration and the “inerter” served to neutralize the effects of tire oscillation. Reducing the load on the suspension system and making the adjustments to the latter even more precise.

Why? Difficult to say for sure. The hydraulic system could have been controlled by an ECU to deliver variable stiffness over a lap as required. There’s no chance of that with springs, supposedly.

This means the driver will now have to cope with a suspension set up for the track as a whole rather than one that can be adjusted corner by corner.

Other than the technical changes mentioned, I don’t see any of the other amendments to the 2022 Formula 1 regulations having much of an impact on the drivability of the cars. In summary, I think we’re going to have a vehicle that is significantly different to pilot than the offerings of previous years, and easy to overcook in grip terms.

Essentially, a lot less forgiving. Consequently, we should see more driver errors than in previous years. More mistakes mean more drama and excitement, especially at the beginning of the season as the racers come to grips with the new handling “normal”.

All this is good news for the fans but maybe not so for some of the guys who will be dealing with it on track. I think I’ll wait till next week to speculate on who the “thrivers”, “survivors” and “sliders” might be…