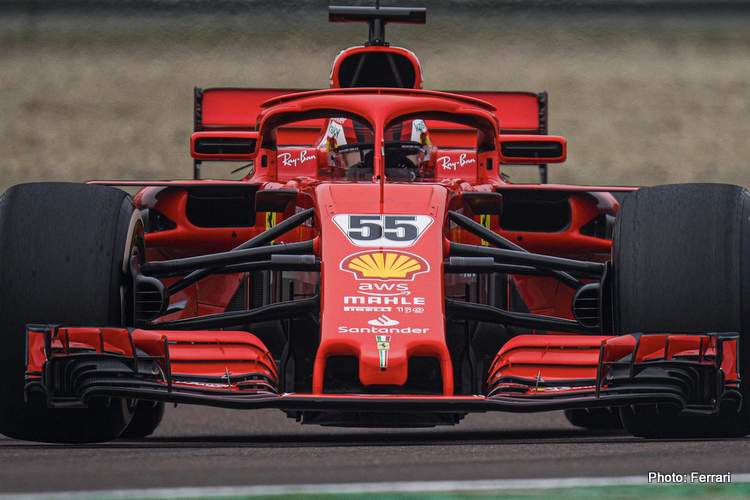 Carlos Sainz feels that driving at Fiorano is always special, after he concluded his driving duties in the private test held at the Ferrari-owned circuit, and that was rounded off in Friday.

Sainz took part in the test along with his teammate Charles Leclerc, and Ferrari’s test driver Robert Shwartzman.

The test was initially planned over four days running the team’s 2021 Formula 1 car, the SF21. One day was allocated for each of the regular drivers, while two days were booked for Shwartzman.

But Ferrari was not allowed to use the 2021 machine and reverted to the 2018 SF71H as a result which also caused a one-day delay, limiting the test to only three days.

The first day of the test (Wednesday) saw Shwartzaman take to the track at Fiorano, with Sainz and Leclerc splitting the driving duties on Thursday.

Sainz completed 59 laps in cold and damp conditions, one year exactly after making his debut as a Scuderia driver at the same track.

Sainz said at the end of his test: “Exactly one year ago, I drove a Ferrari for the first time, and I have to say that, even if a lot of things have changed, given that I now know everyone and I feel really at home, driving here is always special.

“I was very happy to see so many of our fans watching from outside the track, which is why I wanted to go and say hello to them when I’d finished my session.”

Sainz then spoke of his pre-season preparations: “At the moment, like all the other drivers in fact, we are working in the simulator or training really hard in the gym.

“However, when it comes to demands placed on the body, nothing can match actually being in the car. That’s why, being able to drive before the start of the season, no matter in what car, is always very useful for a driver.

“It gives your body a wake-up call, reminding you what it means to be a Formula 1 driver,” the Spaniard concluded relishing the chance of being in an F1 car again.

Leclerc who shared Thursday’s testing with Sainz also gave his thoughts on the testing session, especially acknowledging the Tifosi who where watching the session from behind the track walls.

“Our supporters are special,” he said. “It’s really cold today, but they didn’t want to miss out on this first event of the new season. At least I had the engine to keep me warm, but they are really fantastic!

“After a month and a half without sitting in the cockpit, I was really keen to drive again,” Leclerc went on. “It was great fun and also useful training.

“I can’t wait to be back on track in Barcelona with the 2022 car to really start this new Formula 1 era and see if all the work we have done since last year will pay off in terms of the competitiveness we expect,” the Monegasque concluded, after completing 48 laps around Fiorano.

Shwartzman rounds off the test

Robert Shwartzman, drove on the final day of testing completing a total of 165 laps spread over his two days in the cockpit of the SF71H.

“These past few days, I have driven my first laps as a Scuderia test driver and I cannot deny I am very proud of my role,” the Russian said.

“It’s always nice to drive a Formula 1 car and I hope there will be further opportunities during the year. My approach to the season will be completely different this year, as I am not taking part in any championship.

“I am completely available to the team, with whom I want to be fully immersed as there is a lot to learn. My aim is to get to race in Formula 1 and I think that the test driver role is the best way to get there.

“When the time comes, I want to be ready,” Shwartzman concluded.

Ferrari completed a total of 272 laps, equivalent to 811 kilometers and will now be focusing their efforts on getting their yet to be named 2022 F1 car ready for the upcoming season.

The new Red Racing Machine is due to be launched at 14 CET on 17th February.