How Red Bull objected to Ferrari test at Fiorano 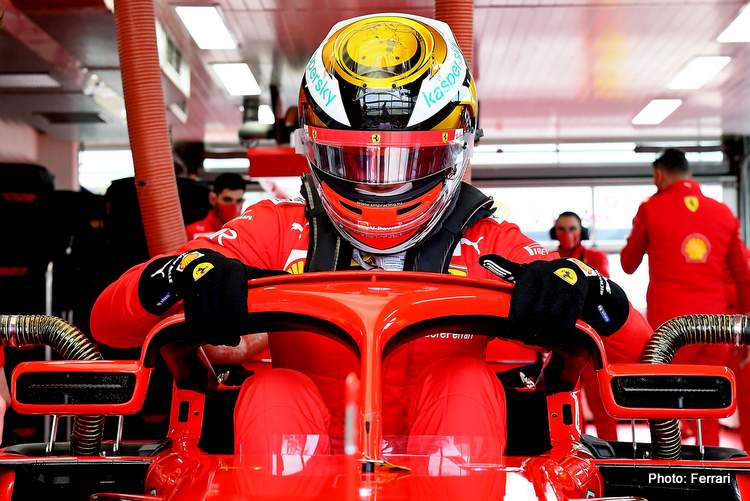 Ferrari announced on Monday that they will be conducting a four-day test at their Fiorano circuit, but reports have revealed that Red Bull have objected on the test.

In their announcement, Ferrari confirmed that they will be using their 2021 Formula 1 car, the SF21, during the test that will be aimed at getting team regulars Charles Leclerc and Carlos Sainz back into the ‘F1 Zone’ as well as a two-day run for the team’s test driver Robert Shwarztman.

However, the team announced on Tuesday that they were not allowed to use the 2021 car and postponed the test for one day until receiving further updates from the FIA.

The test went ahead on Wednesday, as the 2018 F1 Ferrari, the SF71H, was driven by Shwartzman on his first day of testing, with Sainz and Leclerc taking over for the next day. The Russian should be back at the wheel on Friday to round off the final day of the test.

Why the sudden change of plans?

But a report in Funo Analisi Tecnica, shed some light on what went down behind the scenes, and explained why the Scuderia had to do those last minute changes to their test plans.

“Everything was ready for the first test session that Ferrari set for 2022. Robert Shwartzman was the first driver co-opted for the test program with Charles Leclerc and Carlos Sainz next up,” the report began.

“The problem arose because of the single-seater to be used. Maranello intended to use the SF21, the car that finished third in the constructors’ championship in the 2021 season.

“The choice had fallen on this version because all the teams and the International Federation agreed that there was no technical continuity between the models used until a month ago and the new generation cars.

“An evidence ratified by a written regulation but obviously not by an official provision issued by the Parisian body, the report explained.

Look around for a certain Red Bull

Funo Analisi Tecnica went on to claim that reason behind Ferrari’s plan alteration is “easily identifiable”, and revealed that: “All clues lead to Milton Keynes that would have made a communication to the FIA asking for clarification.

“Red Bull, known for its marked propensity to keep everything under control, has raised its antennae through its plethora of lawyers. The clear objective remains the same: not to grant advantages to anyone, especially to a team that could potentially come back,” the Italian website claimed.

While the design concept of new cars for 2022 represents a departure from that of the 2021 cars, the main crossover of technology is the power unit, and this is where Red Bull suspect Ferrari want to “play” while testing this week.

The report continued: “The ‘fear’ of the world runner-up team is that Maranello could take advantage of testing elements that we will see in 2022 on last year’s car .

“Obviously the part that is the subject of suspicion is the power unit which, in its dimensions, should be interchangeable from one car to another.

“It would be decidedly more difficult to allocate and test the engine on the SF71-H , the car that competed in the 2018 world championship.

“We have told about it in various insights: the V6 allocated in the single-seater that will be unveiled on February 17 has parts in common with the previous model,” the publication said. “However, although it uses the same technology, as well as several appropriate adjustments, the hybrid system has undergone further identifiable changes in the motorcycle generators.”

Ferrari settled for what they got

Formula 1 will be introducing a new fuel mixture, called the E10, with 10% of its composition being made up of Ethanol, as part of the sport’s drive for sustainability.

“Substantial changes have also taken shape in the internal combustion section of the Italian power unit,” the report pointed out. “This is a useful and necessary procedure to adapt the combustion chamber to the new E-10 hybrid gasolines .

“The general layout has therefore undergone changes, as well as the service components already partially tested during the last races of 2021 using experimental materials,” it said, referring to the introduction of the new power unit at last year’s Russian GP.

Hence, Ferrari has missed its chance in “accumulating very precious data on the engine, the conceptual basis of those that will be used until 2025 due to the regulatory freeze” the information claimed.

“Pending the release of the impasse on 2021 cars, Ferrari has decided to go ahead with the program in view of the Barcelona tests that will begin on February 23, at Montmelò,” Funo Analisi Tecnica concluded.

That’s a wrap for DAY ONE 🙌