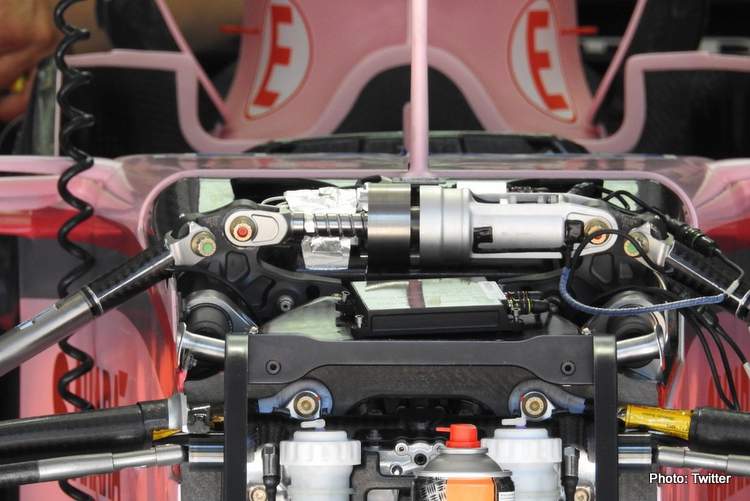 Tech Draft’s second edition for 2022 explains a Formula 1 car component called the J-Damper mentioned in the previous issue, in response to readers’ inquiry about the device that will be banned in F1 from 2022 onwards.

In recent years the use of this ingenious device has been widespread by teams, and a necessity, so let’s have a layman’s look at what the J-damper is, the purpose it serves, and the reasons why it has been banned.

In the mid 2000’s it appears as though it was McLaren who at first included the concept of inertia or mass dampening of suspension movement in their R&D programme, although there is conjecture that it was indeed Renault, who inevitably took the concept further in their resultant and well documented Mass Damper system that ultimately was included on their race chassis, that is until its abolition.

In the typical McLaren fashion of the time, the device was given a coded title, the J-damper. J for “jounce”, a combination of the word’s “jump” and “bounce”, of which the device was designed to control.

The J damper is often alternatively referred to as an inertia damper, or to those of us F1 Tech junkies, a mass damper. Rather than being a device that controls the acceleration of one of the degrees of freedom in suspension movement through the traditional methods of dissipating heat energy by forcing hydraulic fluid through valving, the J-damper dampens axial acceleration through the exchange of kinetic energy.

Simplistically, rather than acting as a plunger, the damper shaft is a ball screw that spins a flywheel or weight as the shaft is accelerated, and the resultant energy system is inertial, as opposed to thermodynamic.

That is all straight forward so far, but the next step is understanding why a mass or inertial dampening system can be more beneficial to an F1’s suspension system in comparison to the more orthodox methods, and a lot more complex to understand in totality.

In my mind, the simplest and most efficient manner to explain the benefits of the J-damper is the following. Even in the simplest of spring/hydraulic suspensions systems, when a race car moves over a bump, it will always oscillate to some degree, and the aim of the damper system is negating that oscillation as best as possible. It’s important to acknowledge that the car’s mass and geometrical properties will also define its inherent or natural oscillation frequency.

These oscillations are evil. They not only detrimentally affect the tyre contact patch, the most important mechanical grip consideration, but also attitudinal control of the aerodynamic platform.

In conjunction with the use of the more traditional damper, the J-damper through its nature of dampening kinetic energy, provides control of suspension movement acceleration in a manner more attuned and sensitive to the car’s natural frequency, negating the oscillations to a greater degree, almost in a predictive or active fashion, but critically in a manner far more sensitive to the suspension system accelerations due to tyre wall movement. The latter allows far greater and a more finite control of the tyre contact patch.

It was once again in the mid 2000’s that Renault had adapted the principle of mass or intertial dampening systems that took the concept even further than individual degrees of suspension freedom, and developed a system that controlled center of gravity migration and aerodynamic platform attitudinal control in a broader sense, in a far greater passive manner.

However, the Renault Mass Damper system was ultimately outlawed on the basis that a satellite sprung mass of several kilos located in the extremity of an F1 car, with the potential to become a significant accelerated projectile in the event of an accident, was a risk worth mitigating, along with the possible ambiguity that the system could be understood to be a moveable aerodynamic device, which of course was and still is illegal.

But, the use of the J-damper to control individual axial accelerations in the suspension system was still legal, and has been widely used ever since because of their obvious benefits.

The J-damper is now officially dead in F1

Clause 10.2 of the 2022 FIA F1 Technical Regulations once again bans the use of mass or inertial dampers in suspension systems.

Due to a complete lack of information from the authorities as to why, one can only suppose that the reasons are related to the generic “dumbing down” of F1, under the guise of controlling costs.

The reality is that J-dampers are bespoke, and certainly not off the shelf items and consequently the unit cost to manufacture high. Nevertheless, isn’t mostly everything in F1 from year to year generally so?

On each axle, the state of its suspension system must be uniquely defined by the rotation, and angular velocity of its two rockers. Inertial and hysteresis effects are acceptable provided they are incidental.

In addition, the following systems or configurations are not permitted:

As I read it, I realized that, not only is the J/mass/inertia damper banned, but also the rake/floor stalling device employed by Mercedes in 2021 is as well.