Schumacher: Not extremely annoyed about any mistake 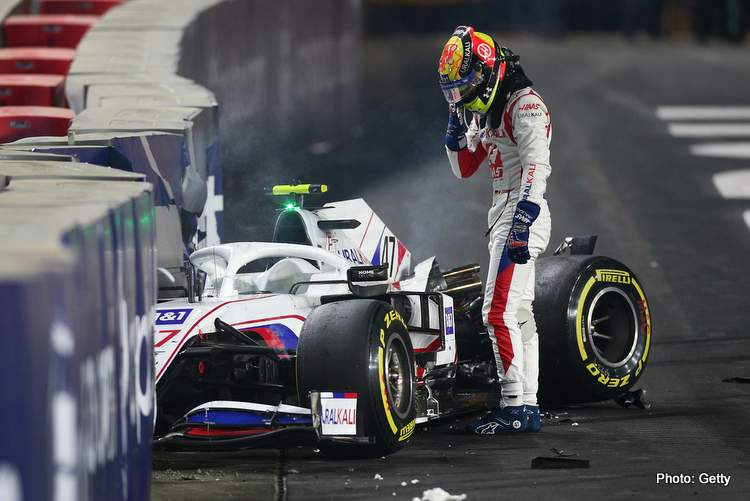 Mick Schumacher’s first season in Formula 1 was not stellar, driving a vicious Haas, but his multiple crashes did not help his case, as the young German claims he is not annoyed about any of his mistakes.

Schumacher will always race with the extra weight of his surname over his shoulders, courtesy of the the legendary status his father, seven-time World Champion Michael Schumacher, holds in F1.

Being a member of the Ferrari Driver Academy, the young Schumacher was questionably thrusted into Haas – when Alfa Romeo was always an option –  the struggling American outfit not even bothering  develop their 2021 car rather focusing on the 2022 machine.

Schumacher had to make do with an evil-handling car on his first season in top flight, which frankly doesn’t count as a proper learning experience, especially that the rookie is known to take his time to learn, usually shining during his second season in a new category, evident from his F3 and F2 forays, as he won both titles on his second attempts.

Despite comprehensively beating his teammate Nikita Mazepin, with an average qualifying advantage of 0.908s, young Mick’s crashes have come with a hefty repair bill, costing his team € 4.2-million and an empty spare parts’ crate for Haas in Abu Dhabi, more damage than any other driver has caused.

Schumacher not bothered by crashes

Schumacher is not really bothered about his crashes but rather considers them as part of the learning curve.

Speaking to motorsportmagazin.com, he said: “I think that you can definitely get angry about it, but I don’t dwell on it too long.

“I am not extremely annoyed about any mistake, because mistakes are there to be learned and everything is part of the development.”

With Haas expecting  better 2022 season, Schumacher is somehow happy he crashed in 2021 – a write-off season anyway – claiming: “It’s better that this happened to me now, when we weren’t racing for points, than if next year things went the way we’d like and then, stupidly, it happened.”

“If I were to travel back, I wouldn’t say anything to myself and just drive myself,” the 22-year-old adamantly claimed. “I entered this season without great expectations. Accordingly, it was neither better nor worse. All in all, however, it went well.”

A highlight of the German’s season however, was him making the cut into Q2 during qualifying for the 2021 Turkish GP, ending the session 14th overall, an impressive result achieved on merit.

“We were able to get into Q2 on our own, which was great,” the Haas driver recalled. “So there were ups and downs that I learned a lot from.”

After their first season together, Schumacher’s race engineer Gary Gannon has dubbed the driver “professional, calm and always so clear” as he told motorsportmagazin.com: “He’s a very quick learner. It was a steep and continuous development that took place in phases.

“He learns a lot about the car and learns which changes meet his needs instead of just driving the vehicle as we give it to him.

“He learns so much every weekend and even in the races where we were only in the last two positions, he learns a lot because he always tries to optimize everything,” Gannon pointed out.

With Haas unexpectedly ending the year closer to Williams and Sauber, a fact the 2020 F2 Champion pointed out that gave him reason to be optimistic, especially if that trend continues in 2022.

“It’s something we didn’t really expect this year. We’re pretty happy about it,” he admitted.

Schumacher spent his debut F1 season toiling around in the back of the grid fighting with his teammate Mazepin, with things getting too close for comfort between the pair, with a 12th place in Hungary being the best the German could muster this season that he finished 19th overall in the Drivers’ Standings.

⏪🇭🇺 Tussling with the World Champion 💪

We loved seeing Mick get the chance to battle with the best in Budapest!#HaasF1